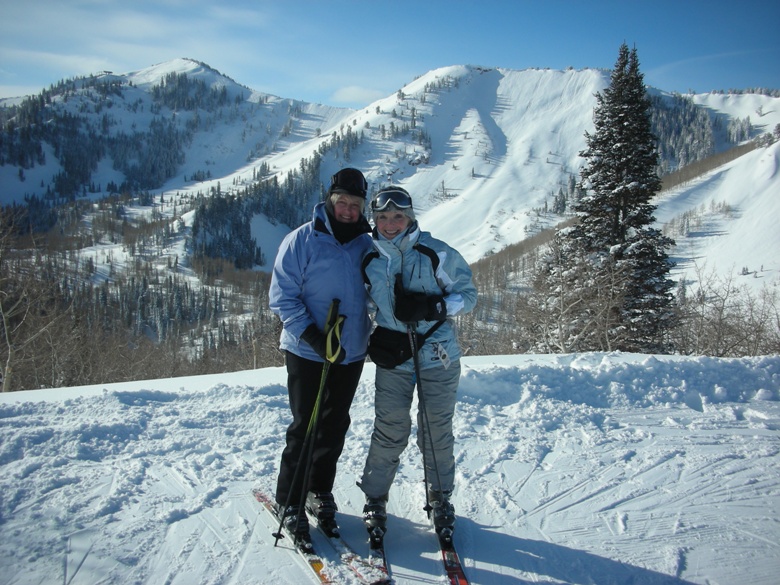 Ah blue sky and sunshine! After navigating in 18 inches of new powder the day before, i t sure is nice to have freshly groomed terrain.

But grandmother Sandy Maxfield isn’t having such an easy time. She came here — after three years of not skiing, after her husband gave up the sport — determined to get started again so she could ski with her grandkids—ages six, seven and under. I’m impressed that she’s even wants to try. But on a blue run, she loses her confidence. It’s too steep. It makes me realize that everyone has a different point where they are out of their comfort zone.

For me, it’s later in the afternoon at the top of a gnarly, bumpy steep run called Grizzly. I can’t figure out where in the bump to turn. I’m afraid to point my skies downhill. It’s so steep! The bumps are so big! But I square my shoulders and say I’m not going to let the mountain defeat me. I’m not going to kill myself either. Slowly, I make my way down, one turn at a time, the instructor Peggy telling me I’m doing a good job. It’s great to look up and see what I accomplished.

The same for Sandy. “I got my confidence back,” she says smiling at the end of the day. “I’m on my way.” She was already starting to plan a family ski trip with her children and grandkids — here of course.

Each in the group of 11 had a different agenda but often it came back to the same thing, whatever their level of skier, to gain confidence, to move a step forward on harder terrain and do it well.

“Just remember if you make step forwards and slide back. Allow that to happen. It’s a natural progression — just keep moving forward and it will come!” Holly had told the group that morning.

Sounds a lot like life, if you ask me. She urges the group to visualize what they want to see on the mountain — and eyes closed, everyone does, imagining they’re looking like Olympians sailing down steep terrain.

OK maybe that won’t happen but we can wish anyway. Holly says these visualization techniques really do help. And my friend Elise Carlton insists that her first run of the day — sun shining, ski blue, trails perfectly groomed, was exactly like she visualized it.

I figure we have to grab those moments — on the ski hill and in life — and enjoy them for all their worth. They make up for all the times that don’t go as planned, for all the moments when we’re standing at the top of a steep slope scared to make the first move down.

At the end of the day, Sandy was glad she’d come. “You’ve only got your grandkids for such a short time,” she said. “You’ve got to make the most of it.”
The other women, trooping in at 4 p.m., windblown and tired, all seemed equally enthusiastic. They gathered round the TV to watch themselves ski — and to see what they could do better. I was just glad I’d made it down Grizzly. I’m going to try it again tomorrow. Hopefully it will be easier.

We finish the day at Deer Valley’s famous Seafood Buffet with Holly and her fiancé, Randy Richards, who runs cultural adventures to Peru (www.mtnspirit.org). The buffet is famous for its variety of food — sushi and two kinds of crab legs, shrimp and smoked salmon, spinach, Caesar and Greek salad — and that’s just a sampling of the appetizers. There’s baby back ribs (BBQ or cilantro lime glaze), mussels in white wine, Kobe beef, bouillabaisse or edame soup, prime rib or duck, mashed potatoes or garlic pasta, seared ahi tuna or honey glazed bass, mushroom stuffed squid ravioli — and we can’t forget the desserts: chocolate carrot cake or crème Brule, banana cream pie or ginger snaps bourbon cheese cake, or gingerbread cake….and that’s only half of them. A good deal for $60 ($32 for kids)

A special night. We feel we’ve earned it!