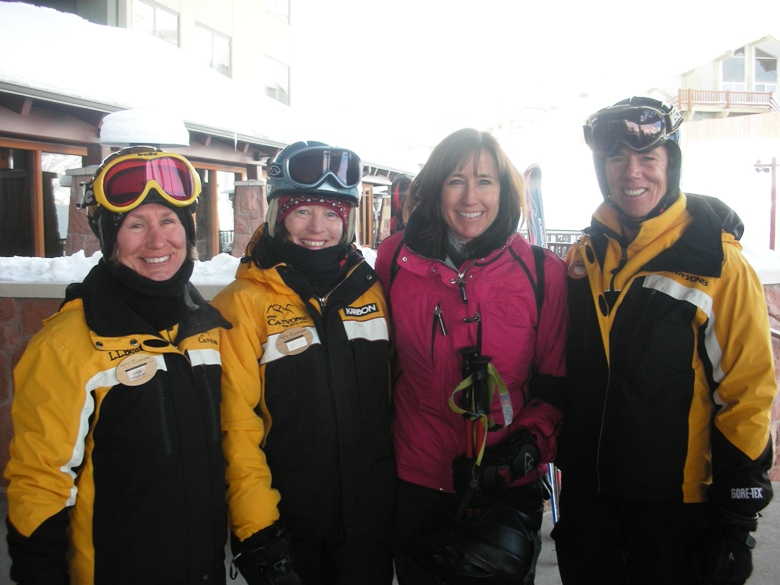 It’s dumping snow — and I mean dumping. By the end of the day, The Canyons Resort will have gotten another 18 inches — more than 80 inches of snow in the last five days, I think. I’m knee deep in powder on an expert run — more powder than I’ve ever skied in. I know if I was skiing on my own, I would have packed it in after one run. Too much snow! Too much wind! But I’m skiing with Holly Flanders women’s clinic so that’s not really an option.

Holly, a single mom of three, was an Olympian and World Cup champion. She skied on the US Ski team for 10 years. She raced from the time she was eight until her late 20s. But she knows that most of the women who sign up for her clinic aren’t world class athletes.

They’re real women. They’re college professors and doctors, graphic designers and college counselors, stay at home moms and full time volunteers. In our group, they range from 26 to 65. They come from around the country. Some are wealthy, others have carefully budgeted the $449 for the three day clinic. They are busy, multi tasking women who don’t have a lot of time to devote to their skiing. But they like the sport and they want to progress. They want to be able to ski comfortably with their husbands and kids who have been out skiing them for years. Sound familiar? That’s certainly my story. Holly has been running these clinics here, three a season. for 14 years. She knows that a lot of women get “stuck” on the blue runs. “They lose confidence as soon as they leave the groomed, blue terrain. My goal is to help them to reach a higher level and when they do it, they enjoy it so much more,” she says.

She coaches me through the powder, one turn at a time. I don’t hit any trees. I only fall once. Yahoo! ! When I get to the bottom of the run, I feel terrific.
That’s the idea. “The result is to gain confidence and then go back to your life and have more confidence in your everyday life,” she says later. “This enhances your life. You stand at the top of the hill and you aren’t sure you can do it you dive in and you do it. If you can accomplish this challenge, you can overcome many other things.”

Holly’s instructors don’t spend a lot of time talking about conquering fear or doing drills. “We learn by doing,” she says. “We want the women to get out and ski in a supportive environment.”

The result: “I got less afraid and I was willing to do things I wouldn’t at the beginning,” said Darma Kamentz, who is in her early fifties. “I was glad I did it.”
“I’m really glad I came,” said Tamara Roberts, a divinity student and mom of two teens in her late thirties. “I accomplished what I wanted. The proof will be whether I can keep up with my family! It was worth every penny!“

As for grandmother Sandy Maxfield from Tucson, who came to this clinic after not skiing for three years so she could ski for her grandkids, went home ready to plan a ski trip for the family.

Ann Conway, who is from Toronto, noted that it’s much less pressure to ski with women of like abilities than to try to keep up with a spouse — even if he is being supportive. No one likes to feel they’re holding anyone back — in anything, much less on vacation. “It’s not as much fun skiing with them as this,” she observes. That’s probably why at least once on every family ski trip I announce I’m hanging up my skies for good.

But not this time. I can’t wait to chase my kids through the powder. Holly just smiles when I say that.