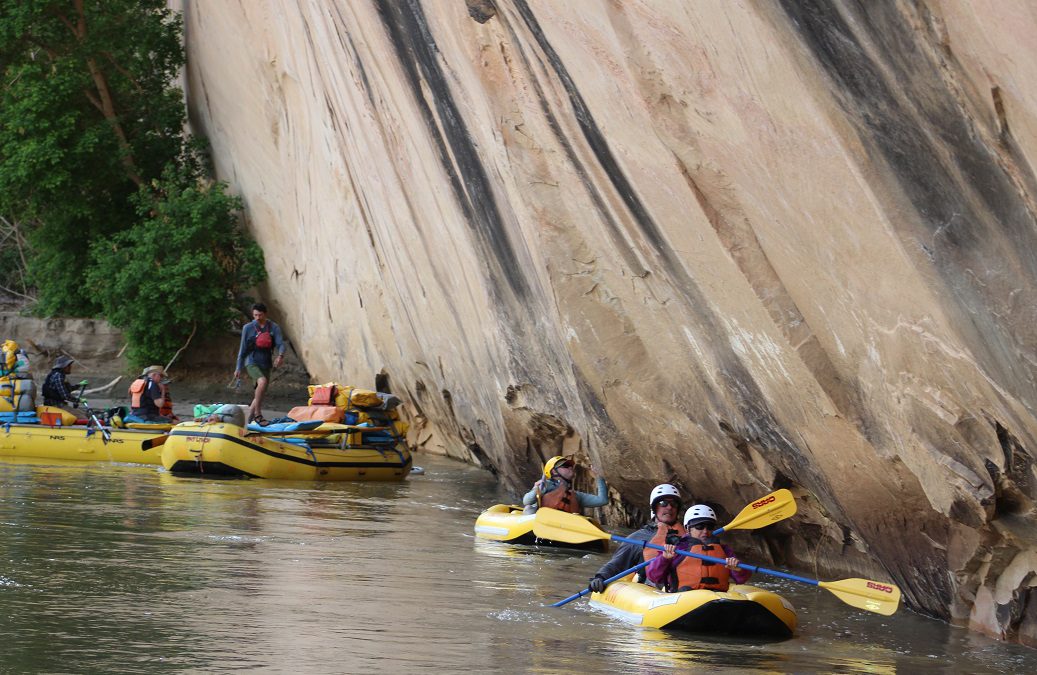 No one likes going to the dentist.

And no one appreciates that more than Stephen “Doc” Nicholson, DDS.

That’s why even when he was practicing in southwestern Colorado, he’d leave for several weeks a summer to camp and guide white water raft trips, his longtime passion.

“People would come into the office saying they hate you,” said Nicholson. “On a river trip, everyone comes in with a big smile on their face. When you work with customers who are happy, it is such a different environment,” he explained.

“Doc” as everyone calls him, is now 74, a grandfather and retired from dentistry but not from white water guiding. In fact, he is something of a legend in river rafting circles especially in the Grand Canyon where he is famous for piloting a four-person dory boat through the famously huge rapids. Dories are small, traditional rigid boats that at nearly 17 feet can run a river much more quickly than an inflatable raft.  “There is a lot more movement and they are more responsive,” he explained.

On our trip, everyone vied for the four spots in Doc’s dory every day. In fact, a few of the rafters on our OARS trip on the Yampa River through Dinosaur National Monument in Colorado and Utah — the last undammed tributary in the Colorado River System — had chosen this trip specifically because Doc was one of the guides.

That’s not to say our other OARS guides weren’t wonderful. OARS is celebrating its 50th anniversary this season—forecast to be one of the best for white water rafting in many years because of this past winter’s abundant snowfall. The outfitter says on average guides have a dozen years with the company. (Doc has been guiding for 46 years!)

We were all impressed with our guides’ enthusiasm, professionalism, focus on safety and knowledge of everything from the kinds of rock formations in Dinosaur National Monument, to the native peoples who lived here thousands of years ago, to the history of rafting that dates back to  1869 when John Wesley Powell, best known for his whitewater run through the Grand Canyon, set out to explore this spectacular canyon country. The first expedition was so difficult that they mounted a second a few years later, producing the first known photographs of the landmarks along the river, mapping and naming some of the most famous like Whirlpool Canyon, Echo Park and Split Mountain.

They showed us how to put up our tents, organized us into “fire lines” to get our gear on and off the rafts, and cooked us amazing meals in the back country — everything from French Toast for breakfast to Quinoa salad for lunch to  steaks and mashed potatoes for dinner, even a chocolate birthday cake for one of the rafters. They instructed us in navigating the rapids in “duckies” (inflatable kayaks), on a stand up paddleboard and in a rubberized raft where six of us had to paddle in synch as guide Doug Nechodom  shouted out commands.

The rest were happy in the dory and letting the guides row the rafts, concentrating on Dinosaur National Monument with its 23 different kinds of rock and canyon walls, looking for different shapes in the rock- was that an ancient princess? A monkey? A crocodile? An Ewok?

“Once I discovered rafting, I gave up backpacking,” said guide Lindsey Mersereau, 30, who works as a ski school supervisor in Telluride CO in the winters. “Why carry all that stuff on your back when you can put it in a boat,” she laughed. “You have the experience of backpacking (and being in the wilderness) with the luxury of car camping.”

Zack Sam, 29, who grew up on the Navajo Reservation in Arizona and spends winters studying engineering, regaled us with stories of Navajo culture and asked for cooking advice — for a young woman he hoped to woo.

Dexter Gardner, whose boat carried a lot of the gear, entertained us with his guitar at night; Mersereau obligingly gave us a breakfast set on her Ukulele when she was rained out the previous night.

And our leader, Kyle Waller, 36, and a snowmobile guide in winter in Crested Butte CO, managed to keep the 23 guests and guides smiling for five days as we made and broke camp daily, conquered rivers and explored the Monument on foot.

These guides showed us it is possible to live your dream and make a living. Doug Nechodom, for one, is busy deciding whether to paddle the Thames, the Seine or the Danube next year—solo.

They led us on side hikes to see ancient pictographs and petroglyphs dating back to 800 AD as well as Mantle Cave, where the ancient Freemont people stored grain. We could still see their stone containers and the remains of homesteaders’ cabins from the 1800s. “There are a lot of layers of history here,” said Nechdom.

“Knowing the region is a big part of the job and we place a major emphasis on it in our training,” said OARS spokesman Steve Markle. “Guides are also evaluated on their regional knowledge and we ask how our guests to rate the overall interpretation/educational component of their trip.”

For a good — and waterproof — overview of the area, check out Belknap’s Waterproof Dinosaur River Guide.

A little white water history: Bus Hatch and his family started exploring what would become Dinosaur National Monument in the 1920s, in the process pioneering river rafting. He founded his company out of his house in Vernal UT in 1929, later using refurbished WWII rubberized pontoon boats. The first concession permit in Dinosaur National Monument, and what is believed to be the first river concession permit in the country, was issued to Bus’s Hatch River Expeditions in 1953. The Utah Hatch River Expeditions now part of the OARS family of companies.

Now white-water rafting has never been more popular. OARS alone runs 1000 trips a year around the world and there typically are waiting lists to raft the Grand Canyon.

That trip, especially, suggests Doc Nicholson, can be life changing as their mind can slow down away from the “noise” of modern life, especially wi-fi and cell phones.

He can’t wait until his grandkids are old enough to raft.  “There’s nothing better than taking kids away from all their stuff for a week,” he said.

To search for your next Grand Canyon rafting trip with 16 of the top outfitters for the best trip for your family, check out Advantage Grand Canyon’s Trip Finder