Getting unplugged in a super fun way 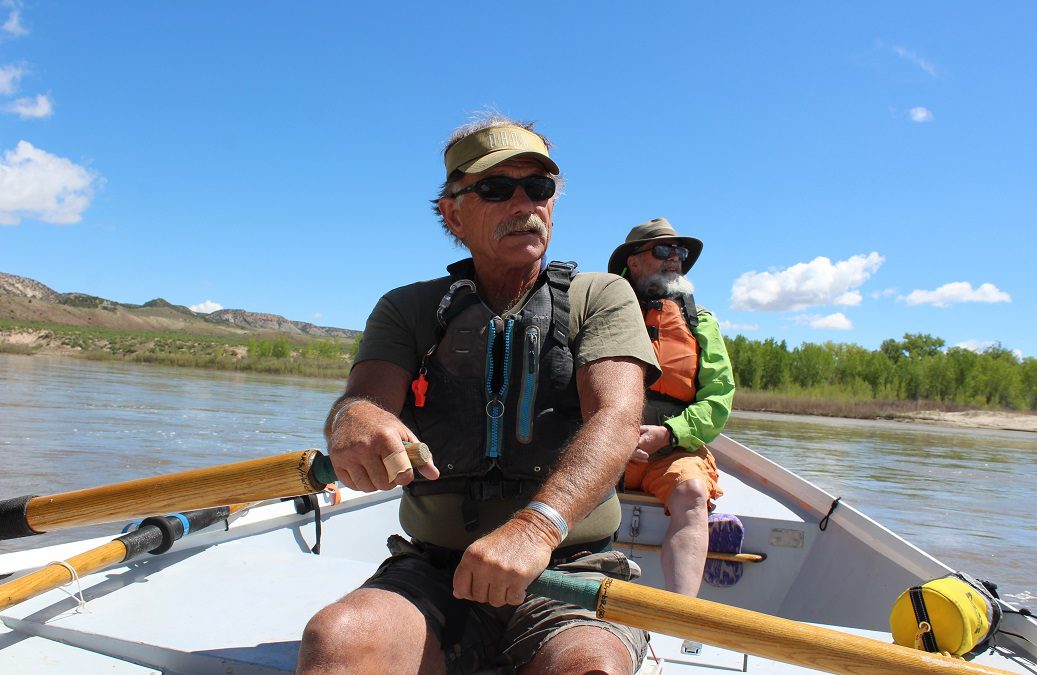 Get ready to thread the needle!

In whitewater rafting parlance, that means aiming your raft between obstacles in a rushing river.

No biggie for our experienced OARS raft guide, Lindsey Mersereau, 30, as she steers our yellow, inflatable raft down the Yampa River in Dinosaur National Monument, which traverses Colorado and Utah. As we glide by, soaring multi-colored cliffs loom on either side of us.

“Once I discovered rafting, I gave up backpacking,” said Mersereau, a ski school supervisor in Telluride, Colorado, during the winter. “Why carry all that gear on your back? Rafting has the experience of backpacking in the wilderness with the luxury of car camping.”

But it’s more than that. For busy parents, it’s the luxury of not having to organize anything for a camping trip. Someone else has shopped for the food on this five-day trip and the always cheery guides cook everything from lasagna to steaks and mashed potatoes, quinoa salad one day for lunch, even a birthday cake for one of the rafters one night. They also offer special options for vegetarians, vegans, etc. The easy-to-put-up tents and sleeping bags (and mattress pads) have been provided. So have the waterproof bags for our gear.

For those seeking to get unplugged, there is no cell service or Wi-Fi and the kids are guaranteed to have too much fun to care. When is the last time they took a shower in a waterfall? Paddled through rapids? Ridden a stand-up paddleboard down a moving river? (The experts say a trip like this is suitable for kids as young as 7. At night, the guitars and ukuleles come out around the campfire.

Because of abundant snowfall this past winter, this is expected to be one of the best seasons for whitewater rafting in the West with opportunities for day trips, as well as multi-day adventures. In California, for example, the high water means extended rafting on the North Fork of the American River near Sacramento and North Lake Tahoe and on the Merced River near Yosemite, which is a great one-day trip and add-on to those visiting Yosemite National Park.

This at a time when more families are camping, even teens, who say they appreciate the chance to get outdoors and unplugged, according to the 2019 American Camping Report.

That includes outdoors-loving grandparents. OARS reports that 20 percent of those on their 1,000 trips are baby boomers enjoying and sharing the wilderness with grandchildren. “Excellent,” said Jennifer Sims, from Vancouver, Washington, back for another trip after rafting with her grandkids last year on the Salmon River. “Quality gear, exquisite meals and attention to all the things that matter — like safety and health.”

That’s no small thing on an active adventure where it’s not unusual for rafters to go into the water, especially from stand-up paddleboards and inflatable kayaks called duckies. We wear helmets; get lessons on buckling our safety vests tightly and also on getting back in a raft and helping someone else in. There is as much focus on hand-washing as on a big cruise ship.

Don’t be afraid to try this,” said Susan Shaler, an attorney in her early 60s from San Diego. “It’s accessible and you don’t need to be in the best shape and the scenery is so beautiful!”

No need to navigate yourself or look at a guidebook, though I found the Belknap’s Waterproof Dinosaur River Guide, a great way to mark the more than 70 miles we are traveling on the Yampa and Green Rivers, our campsites (no one but us) — and the famous rapids. The guides are a wealth of information about everything from the famous dinosaur “Wall of Bones” in Dinosaur National Monument to the geology of the rock formations dating back millions of years to the ancient Fremont People, who lived here thousands of years ago, taking us on side hikes to see the pictographs and petroglyphs this area is famous for, even to a cave where we see their ancient stone containers used for storing corn.

That’s not to say a trip like this is “glamping,” where you don’t have to lift a finger and have every comfort of home and then some.

We still did need to put up and take down our tents daily and form “fire lines,” to get the gear on and off the boats. We washed our plates in pails of hot water, didn’t bathe, except in the river and that waterfall, peed in the river (that was a learning curve) and used an outdoor latrine called a “groover,” always placed with a spectacular (and private) view of the river.

The lack of creature comforts served to add to the adventure and for kids, certainly, a lesson in team work — on the river and off.

But be forewarned that “river trips are real adventures that involve real risk. These are active participatory adventures that take place in wild and remote settings where exposure to the elements is a given,” said Steve Markle, a spokesman for OARS, now celebrating its 50th anniversary.

(Some trips, like down the Colorado River in the Grand Canyon, are so popular it is necessary to book as much as a year ahead. On others, including in Utah, there is still availability this summer.)

The Yampa River, we learn, is the last wild tributary in the Colorado River System that sustained ancient peoples, inspired exploration by John Wesley Powell in the 19th century, drew ranching and farming homesteaders and saw the beginning of the commercial river raft industry pioneered by Bus Hatch and his family in the 1930s.

Today, suggests Stephen “Doc” Nicholson, a retired dentist and legendary rafting guide, this is a great trip for first-time rafters — less than a week long, affordable (starting at under $1,000 per person), beautiful with plenty of spectacular sites (how many faces and creatures can you see in those canyon walls?) and thrills.

Nicholson adds he can’t wait until his two grandchildren are old enough for the experience, especially getting them away from all of their devices. “They’ll see you don’t need all that stuff to be happy. I can’t think of anything better for children.”