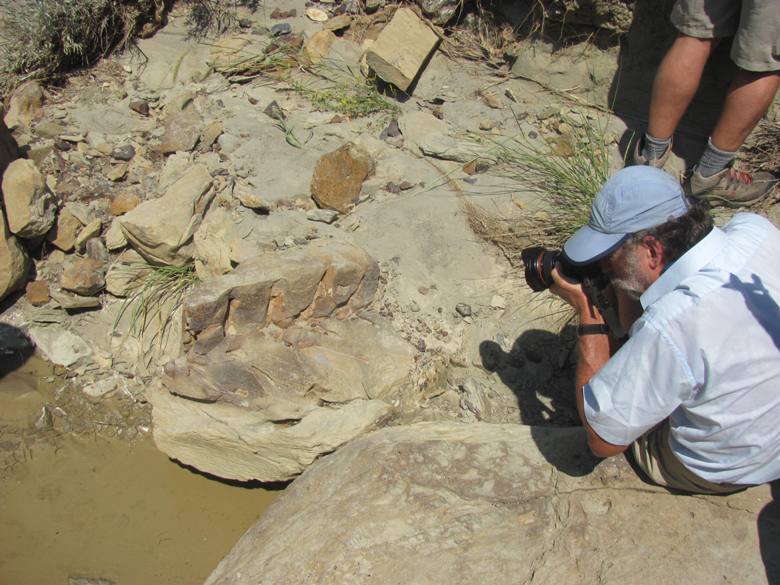 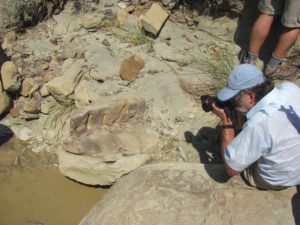 DAY 8 —  Marge Baisch was running horses on her dad’s Eastern Montana Ranch when she spied something on the trail that didn’t belong there—“Too old to be a cow or horse bone,” she thought. She scooped it up and put it in her jacket.

That old bone turned out to be a toe bone of a triceratops—with T. Rex teeth marks in it.

In the 50-plus years since, Baisch and her family have found more than a thousand dinosaur bones and fossils on their sprawling Eastern Montana ranch near the small town of Glendive, where we are lucky enough to bed down in a historic bed &breakfast Charley Montana.

More dinosaur bones are found in Eastern Montana than anywhere else because of the rock formation, we learn.

Tom Shoush, the park ranger at the nearby Makoshika State Park, the largest in Montana with 11,500 acres, explains that 65 million years ago, dinosaurs congregated here on land that at the time was much like a Delta swamp. The soft rock called Hell Creek Formation subsequently eroded, exposing a treasure trove of dinosaur bones.

Makoshika State Park, he adds, was so named by Lakota Native Americans (it means land of bad spirits) because of all of the dinosaur bones they saw there—triceratops skulls everywhere. Later settlers called the stark rock formations Badlands because nothing would grow here and there was no grass for cattle to graze.

But as early as the 19th Century, the area was known to paleontologists, who would  take “trainloads” of fossils away to museums. Ranger Shoush said.

It is the same kind of rock formation that exposes dinosaur bones on the Baisches’  8,000 acre ranch. Today, as we walk in the dusty creek bed, we find a shard here, a rib there, a spine broken in two pieces. I’m not kidding.  It’s right in front of us.

We’re joined by other fossil hunters. The Baisches invite families to come hunt on their ranch ($75 a  half day for an adult, free for kids under 12).  It is brutally hot but 12 year-old Claire Dubois doesn’t care. She’s come from St Paul, MN with her parents Cheryl and Jeff and a group put together by John McCardle who owns ZRS Fossils and Gifts, to just to hunt for fossils here.

“Everyone loves dinosaurs,” McCardle says. “And this is one of the few places where you can hold a dinosaur bone in your hand,” he says.

You can take it home too. Yes, though paleontologists might not condone this, the Baisch family allows fossil hunters to keep their finds, except for major pieces of skeletons, says Shana Baisch, who helps her mother-in-law with the business.  “It is at our discretion,” she said.

“It’s fun to have a surprise when you find something and then to keep it and show it off,” she explains. “I like walking right where the dinosaurs walked, to see the rock and the water where they walked, to think about what it was like then,” she explained.

“It’s an adventure,” adds 10-year-old Nick Frey, here with his dad Jeff from Minneapolis. “If you find it you can touch it,” and keep it, he says. It’s much more fun than a museum.”

“This is out of my comfort zone,” acknowledges Jeff Frey, an engineer, pointing out the duckbill spine and ribs imbedded in the rock. “This is how we all grow and learn.”

We see another piece of the spine a few feet away—the 3 foot by one foot piece must have broken off. “It’s all kind of puzzle,” he says.

Marge Baisch, brandishing a pistol (in case of mountain lions and snakes) and riding an all-terrain vehicle, revels in everyone’s enjoyment and excitement “What gets me excited is watching the kids get excited,” she says, noting that she often hosts Make a Wish Foundation children. “Kids love it here.”

How could they not? Everywhere they look are shards of bone—maybe a T-Rex tooth or maybe petrified rock,  The trick, says Shana Baisch, as she inspects a piece one of the kids has handed her, is to “look for small fossil  pieces and then follow those up the hill in the hopes of finding a big skeleton.   That’s happened to.

Legally, the Baisches don’t have to donate their finds to museums, though they have in the past. They can keep what they find (they have a small museum on the property) sell them (they’ve done that too) or in most cases, let the hunters take what they find.

“The more people you have looking,” says Shana Baisch, “The better the chances of finding a big skeleton.”