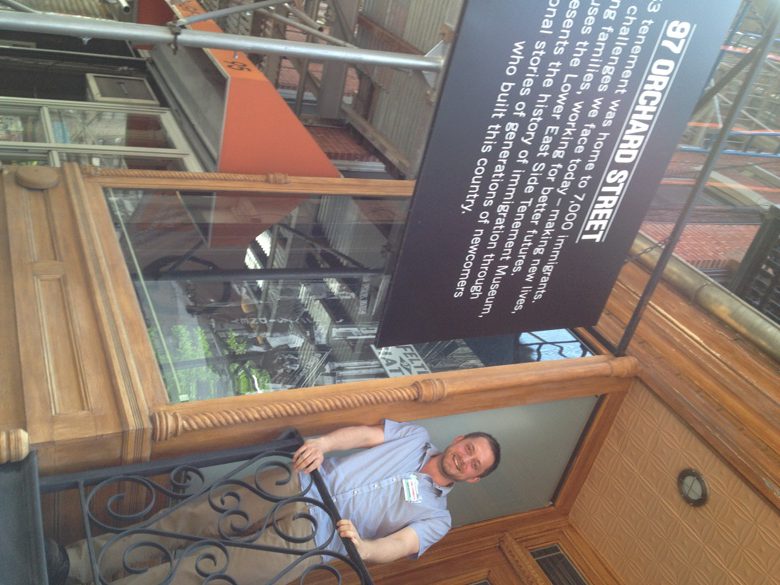 NEW YORK — Bagel and lox anyone?

Maybe you’d rather have potato latkes with apple sauce, smoked sable with goat cream cheese or chilled borscht made with beets.

We’re at the new Russ  & Daughters café that has just opened on the Lower East Side in New York City where, after breakfast, we’re going to the Tenement Museum down the block on Orchard Street to learn about the history of family businesses here—like Russ & Daughters.

This year marks the 100th anniversary of Russ & Daughters , famous for their smoked fish, herring, bagels and more. The store and the former tenement building where it is housed are on the National Register for Historic Places.  Since 1914, the store and now the new café run by cousins Niki Russ Federman and Josh Russ Tupper—there was a line out the door waiting for the doors to open at 10 a.m. on Memorial day—have been run by  four generations of the Russ Family.  It’s a New York institution.  Mark Russ Federman even wrote about about it: Russ & Daughters: Reflections and Recipes from The House That Herring Built talking about how Joel Russ first started peddling herring from a pushcart shortly after he arrived from Poland in 1907.

When I was a kid growing up on Long Island, my mom would make an annual pilgrimage to Orchard  Street to buy us underwear and socks—at one point, we learn at the Tenement Museum, the street was lined with tiny underwear stores—with customers perhaps stopping at Russ & Daughters, Katz’s for a pastrami sandwich  (it’s been a fixture in the neighborhood since 1888) or Yonah Schimmel  Knish Bakery for a delectable baked potato dumpling that might also have vegetables.

Today, most of those tiny underwear stores, where they only took cash and you had to bargain with the proprietor after he brought out the merchandise, are gone, replaced by trendy restaurants and shops.

But the Tenement Museum is the place to learn about the history not only of this neighborhood, but of the pivotal role it has played in New York City’s immigrant history—and continues to play. The museum tells the stories of the people who have lived and worked at 97 Orchard Street where the museum is located from the time it was built in 1863.  Over the years, it was home to nearly 7,000 immigrants—Germans, Irish,  Italians and Irish among them.

We opt for the new Shop Life program.  Family-run stores filled the lower level of the building for over 100 years; others in our group learned the story of Irish Outsiders who arrived to the then predominantly German neighborhood in the second half of the 19th Century.

Those on the tour with us are from around the country and as far away as Japan.  We sit in the recreated bar on the ground floor that German immigrants John and Carolina Schneider ran for more than 20 years, starting in 1864. “Did he achieve the American Dream,” our knowledgeable guide Nick Capodice asks.

He and his wife certainly worked hard.  We learn the busiest day was Sunday, when German families –kids too–would gather here after church for beer, conversation, music (Schneider had been a musician in a Union Army regimental brass band) and free lunch—salami, sauerkraut, sausages, pretzels, dark bread.  Carolina would prepare food for 50 or more in a space behind the bar barely large enough to turn around in, carting water from outside for dishes and cooking.   The kitchen and bar are laid out the way it would have been then — sausages hanging, food ready to serve, a barrel of beer, musical instruments, German newspapers, decks of cards and dice.  We learn more German immigrants came in the 19th Century than any other group.  The couple had just one child, Harry, and lived behind the bar in cramped quarters that we see.

“There was so much beer,” our guide Capodice says.  At one point, there were 48 individual beer makers just in Brooklyn.  But because families came to German bars in those days, and the beer was low-alcohol, there weren’t fights or rowdiness.  Later when drinking was outlawed as “Un-American” in New York on Sundays, the Germans got around it by initiating private clubs.

Sadly, the Schneiders’ life unraveled after Carolina died of tuberculosis at age 50; her husband ultimately sold the bar and died at a pauper’s hospital. No one knows what became of Harry.

But that was just the first of many stories of the family businesses here—there was an auction house, a kosher butcher, a grocery, a feather bed dealer, a jeweler, hat company and yes, a tiny underwear store in the 1960s and 1970s.  Perhaps I visited here with my mom.

All were family businesses where the kids helped from the time they were barely out of diapers.  We learn more during the final part of the tour where we individually can see old pictures and hear oral histories from the families themselves.

We hear from Salah and Jebreel, two brothers who with their family own the 24-hour Happiness Deli in the neighborhood. The Deli has been in business for more than 25 years. Jebreel is in college and hoping to go to medical school; Salah wants to continue to run the business and be part of the community.  “It’s good to be around your family…this is what business is,” he says.

Just as it was for generations in this neighborhood before him.