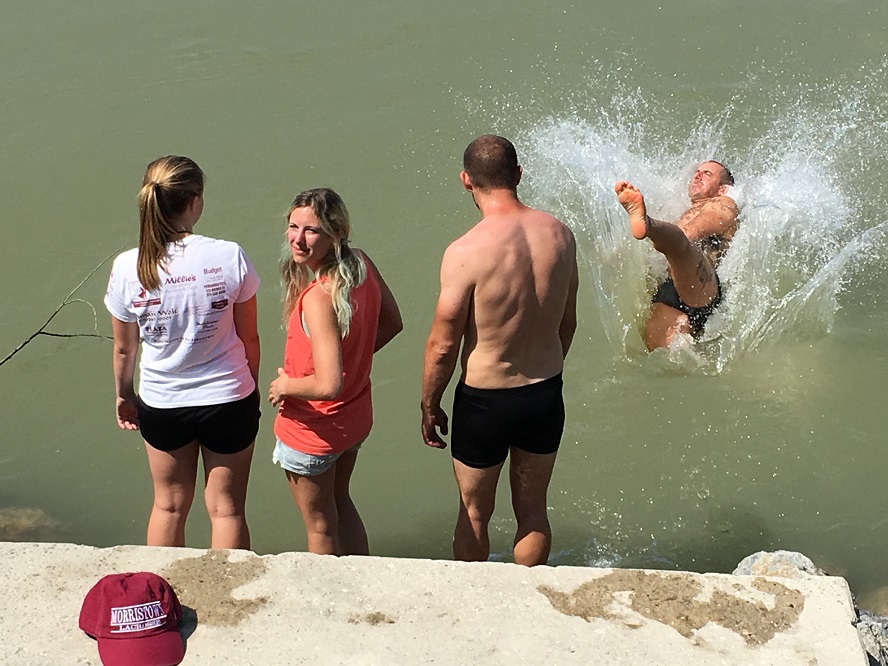 BRATISLAVA, Slovakia — What do I do?

It’s nearly 100 degrees and I’m on a bike trail in Bratislava. I’ve lost our Backroads biking group after getting caught behind a big Japanese tour group in the historic  city square and now I’ve lost my husband as well. He was ahead of me, not realizing I didn’t have a Garmin GPS device on my bike. And I’d given him the paper directions our leaders had given us.

The “Iron Curtain” bike ride was to take us about 18 miles through the country side into Austria from Slovakia — the border made famous by Winston Churchill and the Cold War. Our boat, the AMAstella, was scheduled to make a special stop to pick up the group at Hainburg.

And this was supposed to be an easy day. Not only were the bike trails level but I was trying an E-bike that would provide some extra power—an assist—while biking, especially helpful on hills.

But I couldn’t seem to get the motor to kick in and E-bikes are 26-pounds heavier than regular bikes. As I’m looking for our leaders’ phone numbers, my husband comes pedaling back, angry that I hadn’t been behind him as he had thought.

By now we were hopelessly behind the group, hot and each blaming the other for the missteps—he blaming me for not keeping up; me angry that he had gotten us lost trying to get out of Bratslava onto the bike trail, despite having the GPS.

This morning we’d started with a quick historic tour from the Ninth Century to the dissolution of the Austro-Hungarian Empire at the end of World War I, forming Czechoslovakia, being occupied by the Nazis, then Soviet Communists and, ultimately, to democracy.  “The Velvet Revolution” –non-violent demonstrations—during which some 15,000 people demonstrated on Nov 17, 1989 that sparked a ten-day uprising that swept communism from power.  In 1992, the two countries parted ways.

“It looks like a movie set,” said 14-year-old Micah Bronfman, the youngest member of our Backroads “Breakaway” family trip.

Micah has an older brother and sister and this trip is designed for families traveling with older teens, college students and beyond. It differs from other Backroads trips in that the AmaStella is our floating hotel for the week—no need to pack, unpack and move hotels every two days. “That added an extra layer,” said Micah’s mom Ronit Walker.

But David Meyer, also a Backroads veteran, and traveling with his wife and three sons all in their twenties, said he missed the chance to explore new cities in the evenings.  “I’m worried the boat will get boring,” he said.

“But he’s not worried about doing laundry,” his wife Virginia said. She was among the moms on the trip who had opted for E-bikes.

I’m ready to kick mine! I convince my husband to stop, that we can never catch up with the group at this point. After several tries (I couldn’t figure out if I didn’t have the right country codes or the phone numbers were wrong), we connected with our leaders, shared our location via Google maps and then all we had to do was wait for one of the vans to get us.

Phew.  We joined the group for lunch and made it back on the boat on schedule. All part of the adventure, though one I wouldn’t want to repeat this week.

PS: It will make a good story to tell on future trips. We were already laughing about it as we watched the young folks from the ride cool off in the Danube as the AmaStella approached to pick us up.