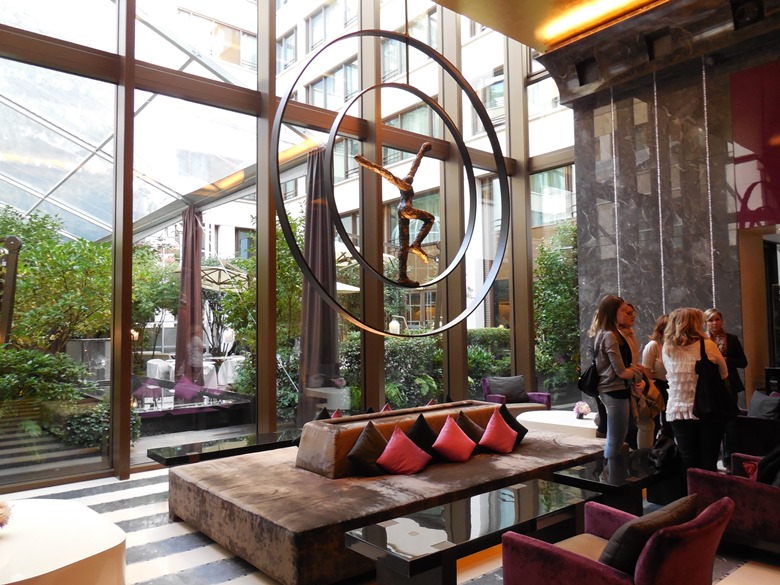 By Eileen OgintzDAY ONE — PARIS — Claude Monet certainly knew what he was talking about.

The area in the Musee de L’Orangerie in Paris that he created to showcase his famous Water Lilies is meant, he said then, to create a space between the hustle and bustle of the city and his wonderful paintings.

Armed with the Paris Pass that gave us unlimited access to museums, we headed to L’Orangerie when our room at the Mandarin Oriental wasn’t quite ready when we arrived bleary eyed and jet lagged after a none too comfortable overnight flight and an excruciating hour-long wait in an overheated customs area at Charles de Gaulle Airport.  I was glad to see the customs agents pulling out parents with young children and ushering them to the front of the line.

The best part about the flight experience—for the first time we used TSA Pre Check at JFK in New York—the new government program we’d signed up for that allows us to speed through security.  It worked! Not only did we go through a special line but we didn’t have to take off our shoes—not even our jackets—or take anything out of our bags.  Nice! The program is going to be expanded to more airports before the end of the year.

Back to Monet. Another plus with the Paris Pass

—we didn’t have to wait in the long line to get into the museum!  And we found Monet’s Water Lillies—the eight huge panels in two rooms painted to evoke the hours from sunrise to sunset from his “water garden” at Giverny.

When Monet gave the huge paintings to France after the First World War, he said he was offering a haven of peace, inviting people to contemplate nature.  “Nerves strained by work would relax…following the restful example of its…waters…this room would offer a refuge for peaceful meditation in the midst of a flowering aquarium.”

Of course these paintings are among his most famous and a culmination of lifetime’s work.  I especially loved the Morning panel in the first room and the Reflections of Trees in the second room.  Young teens were busy sketching as visitors sat on the benches and contemplated Monet’s vision—and talent.

The museum isn’t too big—ideal for a foray when you are jetlagged.  We walked back through the Tuilleries Gardens where the museum is located to the Mandarin Oriental, less than three years old, and I’m told, a haven for well-heeled families from around the world and particularly popular with Americans. I’m sure they love the big indoor pool; I loved the spa—yes you should take time for a little pampering in the midst of a sightseeing trip!

The hotel on Rue Saint Honore is in the heart of Paris’s famous shopping district.  But inside all is calm and mellow.  I like that each treatment room has its own steam shower.

We joined fashionable Parisians for a wonderful lunch at the restaurant Camelia where every dish—including my seafood pasta—was too pretty to eat.

I also like that this hotel has such an accommodating staff.  When I mentioned we were thinking of going to a famous brasserie in the Bastille area, the Concierge suggested that might be “too touristy” and sent us to Ma Bourgogne, a tiny bistro in the hip Marais district on the edge of the Place des Vosges where children were playing in the puddles after a rainstorm.  Like other locals and visitors, we waited put the rain in a café called Hugos at the edge of the square—so named because Victor Hugo’s home—now a museum—is at the square.

This arrondisement is famous for being the old Jewish quarter but now for being the home of hip Parisians with unique boutiques on every tiny block.  Lucky for us, it was saved from demolition.  After the French revolution, the nobility departed.

Today, we can still see their stately homes—including the two that now has the Carnavalet Museum packed with everything that evokes Parisian history—keys to the Bastille, china commemorating the revolution, a new exhibit on the history of fashion.  Did I mention the museum is free?

If I hadn’t been so tired, I would have taken advantage of the audio tour, as all of the signage is in France.  But even so, it was a great introduction to Paris.

Thanks Mandarin Oriental for such a good night’s sleep