In Freeport Maine, a restauranteur who gets it about kids and nutrition 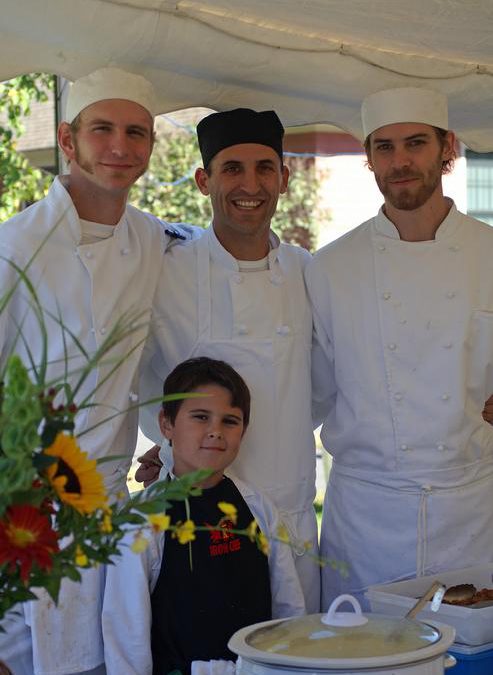 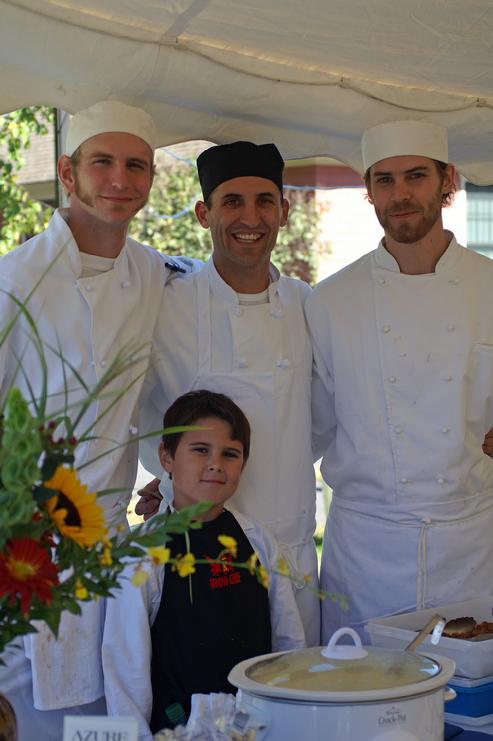 DAY 3 — I wish every restaurant had a Jonas Werner.

Werner is the owner of Azure Café in Freeport, ME, which as the hometown of LL Bean attracts nearly as many visitors as Maine’s other top attraction– Acadia National Park.

On Father’s Day weekend with all of the shops offering specials for dads (25 per cent off all men’s shirts!), Werner’s restaurant, just down the block from the gargantuan LL Bean store, is busy with tourists and locals alike.

But what sets this place apart is his philosophy that I wish other restaurant owners and chefs would embrace. Rather than limiting kids to a kids menu, he offers smaller portions of just about everything on the menu – from calamari to filet mignon and Scottish salmon — at a reduced price.

“Our kids didn’t want to eat from the kids menu,” said Warner who has two children. He and his wife didn’t want them to either. They wanted the kids not only to eat healthier but to “try something new.”

“Absolutely we want to encourage families to let kids try something else,” he continues. “Our goal is to cook food people will love—even if it is something they’ve never had before.”

Werner says more families than he thought are embracing the concept, especially locals, since there aren’t that many choices where you can go out to dinner and kids can order a smaller portion of calamari (a favorite with local kids), insalata mescolore with caramelized pistachios, gorgonzola and grilled strawberry vinaigrette (another popular choice) and crispy pollo carbonara with prosciutto, mushrooms and peas.

More restaurants and hotels should get with the program. Frankly, I’m so tired of hearing about kids-eat-free-from the kids’ menu programs. Do we want to encourage kids to eat a diet of mac and cheese, chicken fingers or hot dogs for several days in a row?  Do kids, once they are in kindergarten, even want that?  Not the kids I know who love sushi and steak and different foods. Parents shouldn’t want them to eat a high-carb, high calorie diet either.

And besides, travel is about new experiences, expanding horizons — and what better way to do that than through food. I remember one trip to France with my then 11 and 6 year-old daughters and a friend of my older daughter. We were driving a barge along the Rhone River and would stop at small local restaurants at night for dinner where the two older girls would order the most outlandish (to them) items on the menu—escargot, frogs legs, pate… a tower of weird looking shellfish. Some they enjoyed, some they didn’t, but they reveled in the experience and so did we.  Even my 6-year-old tried the escargot.

Sure restaurants need to have the obligatory children’s menu. “People expect it,” Werner says. But what’s wrong with offering smaller portions for smaller prices too?  It doesn’t cost anything more, Werner says—it’s not like he is buying an extra amount of extra meat or fish.

Werner jokes about local kids coming in and ordering calamari rather than “running away from squid.”

“If you can get kids when they are young, they will influence other kids around them and their parents,” he says.

First Lady Michelle Obama certainly would agree. She of course has made a fight against childhood obesity the central tenet of her time in the White House, complete with a much publicized organic garden. The National Park Service has embraced her “Let’s Move” concept in its Junior Ranger program with activities to get children and their parents to be more than “windshield visitors” to the nation’s national parks.

And here in Maine, restaurant owner Werner wants to do his part. He and his chef are hoping to take a page from celebrity chef Jamie Oliver’s book and remake school lunches at a local middle school.

“It’s important,” he says “We’re doing what we should be doing.”

Meanwhile, he’s delighted when families come in and allow a child or a teen—there is no age limit on the smaller portions — to order a steak or a lobster roll — a classic Maine dish that is lobster salad on a roll.

“Parents are happier and the kids are happier,” he says. And hopefully, that makes for return customers.

I can expect nothing less from my son, Jonas and Wonderful Daughter in Law, Katie. The are all about family and love,sharing and kindness, and giving, their very best each day to all whom they come in to contact with, no matter where they are, no matter what they are doing, they are 100 percent beautiful people inside and out. I love you Jonas and Katie, and love what you stand for and love the AZURE~ The Best! MOM