In Norway — Not your ordinary Splash Mountains 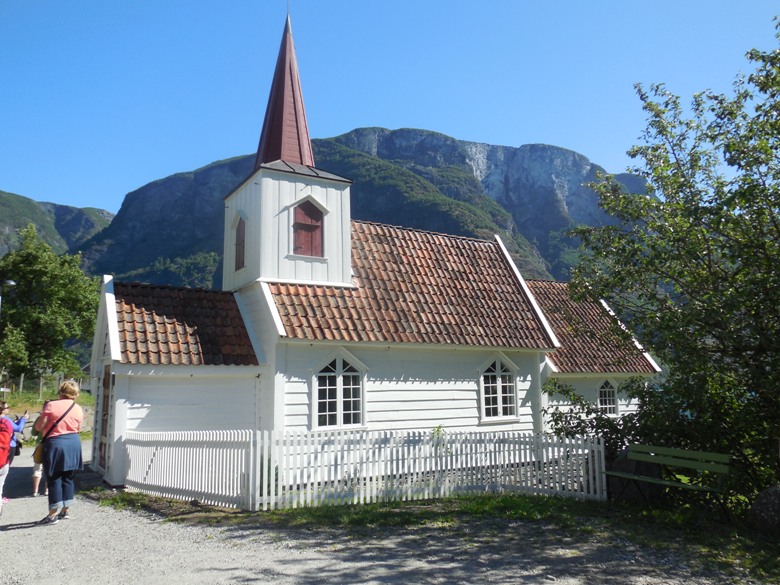 No we’re not at Disneyland or Disney World. We’re actually in Norway exploring the famous West Norwegian Fjords with Adventures by Disney and I’ve counted at least 18 waterfalls on our Fjord Safari from the small town of Flam (less than 500 people live here.)   The Sagfossen waterfall is especially impressive, 1800 feet high—the tallest in the fjord.

We started our trip from Flam on the RIB inflatable dressed in an insulated puffy suit with goggles, hat and gloves that kept us cozy despite the wind and spray.

Incredibly, this tiny village gets upwards of a million visitors a year, including many on cruise ships who make a beeline to ride the Flamsbana Railway for the privilege of climbing almost 3000 feet through 20 tunnels, the world’s steepest railway running without cable.

We pass on the train in favor of the tour on the inflatable and later, a hike up to another waterfall.

Naeroyfjord is one of just two fjords in the world that has been designated a UNESCO World Heritage area. It’s easy to see why—the craggy mountain peaks, the thundering waterfalls, the small villages like Undredal (population 65 people and and 350 goats!).  We see a herd of baby goats grazing by the water’s edge.

“Seeing the goats was my favorite part of the day,” said Sara Sofia Guthmann, 6.  It was one of my favorites too.

Let’s not forget Undredal Stavechurch, the oldest church in Norway and the smallest church still in use in all of Scandinavia—room for just 45 worshippers, our guide Kari Morbve Jordalun tells us.  This church was first built in 1147 but still is the site for weddings and baptisms.

“I thought the church was the best part,” said 16 year-old Amelia Brande,  who is on our trip with her great aunt.

There were once more than 1,000 such wooden churches in Norway but there are  just 28 left.  They are famous for their  timber framing and  steep roofs—the load-bearing posts are called stav in Norwegian—and inspired the design of the castle in the movie Frozen.

Younger Kids would love trying to count the painted stars on the ceiling (there are 800!) and the painted angels—all uncovered under at least four coats of paint and dating back the 15th Century.

Young feminists, meanwhile, will also bristle at the story that women sat on north side of the church—in case evil spirits entered, they would get the women and leave the men safe.

This is such spectacular country!  These West Norwegian Fjords are some of the longest, deepest and narrowest in the world and are considered representative of Norway.  Some of the rock walls are 4,000 feet high and 1400 feet deep.  No wonder Naerofjord is so popular with sea kayakers, like the ones we see pausing at the waterfalls, one more interesting and amazing than the next. (I found Lonely Planet’s Norway book very useful  and shared with others on the trip.)

We learn that Norwegian farmers here would have to move their sheep to “summer farms” high in these hills so they could graze in the summer months. Women would make traditional brown goat cheese—carrying the milk to the icy rivers to cool it, then stirring for hours, storyteller Leif Inge tells us.  He runs a café in Undredal where he demonstrates how labor intensive it is to make this traditional Norwegian cheese.

“In Norway, farmers have to use the mountains and the valleys,” he said, “all of their resources.”

That may be why Norwegian folk tales became such a tradition. Up in the mountains on their own, they had nothing but their stories—and the fantasies they created—to entertain them.

Meet Huldra, who would come out from the hills and entice young lads to fall in love with her.  She had a long tail and often played musical instruments—symbolic, he said, of the importance of “listening to the sounds of nature.”  If the lad was a good husband, Huldra would lose her tail and become human, if not, her tail would remain.

“Trolls help us appreciate the power of nature” Inge said. They are supposed to bring good luck.

For lunch, we try some brown cheese (an acquired taste, I think, a bit sweet), reindeer  meatballs (kind of like giant Swedish meatballs) and roasted goat (not my favorite).  We drink fresh-pressed apple juice and another made with local red berries.

Back on our RIB inflatable boat after lunch, our guide, Rune Tokvan, who happens to be the owner of FjordSafari, points out Dyrdal, where the reindeer gather.  Every September locals, including him, hike up into the mountains to hunt them, often carrying the meat back down on their back.

We pass a huge mass of stones that  is a Viking tomb. They were buried with their boats, we learn.

The small villages, some just a few buildings, look like they belong in a post card—the red and green barns, the white houses.   At another spot, we learn there’s just one year round resident, a man now in his 70s.   At Bakka village, the narrowest point of the fjord, just 11 people live here

We meet 93-year-old Botolv Hov, who opened a café when the government designated his land a national park—after he had just built a new barn.  Now, he and his 89-year-old wife  cater to the cruise crowd, serving them hundreds of waffles at a time.  Is that really easier than farming?

Back in Flam we get a new appreciation for the hardy Norwegian farmers when we hike up the steep trail to the Brekkenfossen waterfall,  a climb up about 1000 feet.  It was steep and rocky; the views fantastic.

Sheep farmers clamor up and down hills a lot steeper than this.  On the way down the trail, we encounter a mailbox inviting visitors to leave a note for local school children.  What a great idea.  “You are so lucky to be growing up in such a beautiful place,” we say.

I can’t resist the tale about Huldra and the trolls bringing good luck.  When we get back to town, I buy each of my kids a troll.  They are supposed to bring good luck, after all.