In Rouen, France — Joan of Arc and Monet 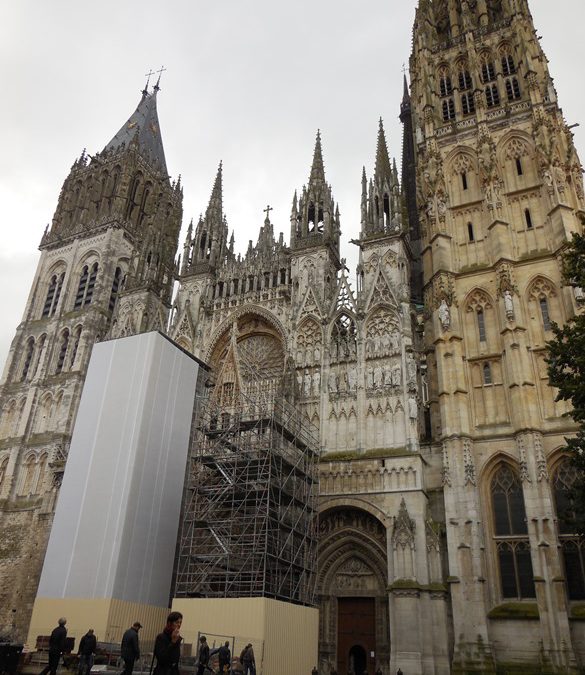 DAY 9 — Rouen, on the Seine River in Normandy — She was a teenaged girl who was seeing things.  Centuries later, she is the national symbol of France.

Joan of Arc was born in 1412 to a family of farm laborers. When she was a young teen, she started to hear voices telling her to help the dauphin regain the throne.  From the start of the Hundred Year’s War in 1337, the English and French fought over that throne and by the time Joan of Arc came along, our Avalon Waterways guide Martine Janssen explained, England ruled three-fourths of France.  The king had even lost Paris.

She dressed as a man and King Charles VII allowed her to try to fight for him—she liberated Orleans and she had Charles crowned in Reims where all French kings had been crowned.  But she was taken prisoner in May 1430 and brought to Rouen where she was tried.  Rouen had been under English domination. She was found guilty of heresy.

She was burned alive on May 30, 1431. Twenty-five years later, she was “rehabilitated” and judges proclaimed that the city of Rouen erect a cross on the site where she died.  In the famous cathedral, a chapel is dedicated to Joan but opposite where she died is a strange looking church –The Saint Joan of Arc Church with 13 Sixteenth century stained glass windows—bright blue, green, red.

These windows were originally installed in a church which was destroyed in air raids of 1944, but the windows had been in storage since 1939.  We read them from bottom to top, from right to left.  They are truly glorious—one of the finest collections of 16th century windows anywhere.

Joan of Arc, we learn, was all but forgotten for 400 years.  It was only after World War I that she became a symbol of French nationalism and of course, of feminism.

In this medieval city we see a cathedral that was begun to be built in 1145—amazing it is still standing after being damaged in WWII.  Nearly 9,000 half timbered houses burned during WWII.  I’m glad there are still many to see dating back centuries, some home today of trendy shops.

We stop in front of the shop that commemorates the famous French Macarons which were apparently invented here by a Madamme Auzou in the 19th century.  Today we can buy them in every color and flavor—yellow and purple and blue and orange

There’s even the oldest tavern in France—La Coronne—from 1345.  Beer anyone?  We wander the old narrow cobblestoned streets, stopping to by some famous Normandy caramel sauce (our kids love caramels), ogling the chocolates and pastries, one shop better than the next.

It is Saturday so there are more locals out shopping than tourists in the city that still has 800 historic buildings. Flaubert, we learn, wrote Madame Bovary 150 years ago;  Monet painted the Rouen cathedral many times from the window across the small road—in every light. That building, our guide tells us, housed a women’s lingerie shop and women would question what a man was doing upstairs.

Back on board our Avalon river cruise, we settle in for lunch—delicious roasted chicken and carts among the offerings on the buffet followed by pear tart, ice cream and caramel sauce.  Along with local cheeses.

We force ourselves to sample the macrons an expert French maker has brought us from his shop after he demonstrates how to make them.

Anyone hungry for dinner?