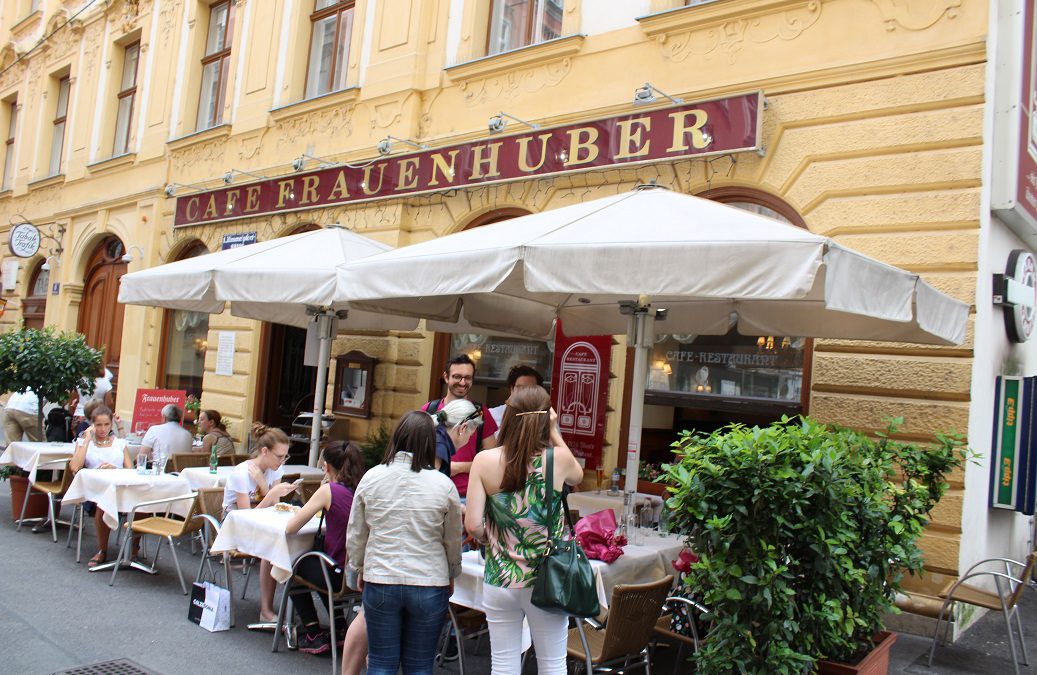 Sacher torte is a chocolate cake invented by Austrian Franz Sacher in 1832 for Prince Wenzel von Metternich in Vienna. It is one of Austria’s most famous pastries—a dense chocolate sponge cake with apricot jam filling and dark chocolate icing.

Back in 1887, as many as 400 a day were baked in the Hotel Sacher, according to AmaWaterways (I love the tidbits of information we get each day!) They remain popular with locals and tourists alike and often are eaten in a Coffee House. Legend has it Austria’s sophisticated coffee culture started with coffee beans left behind by the Turkish armies that had besieged Vienna in 1683. The first Viennese coffee house opened in 1685 and by the turn of the 19th century, writers, artists, musicians and other intellectuals would gather at coffee houses, sitting for hours.

After a 28-mile bike ride this morning with our Backroads group on Danube Island, where it seemed all of Vienna was out biking and strolling on this Saturday morning, we’ve adjourned to Oberlaa café after a walking tour of Vienna.

By the way, if you like coffee on the go, this is a great way to go.

We are cruising on AmaWaterways’ AmaStella but with a Backroads group of 30 so that we have guided bike tours each day. We could also opt for AmaWaterways’ excursions—last night some of us went to an Austrian wine tasting where we were entertained by an accordion player—while others opted for a night on the town, some of the 20-somethings not getting back until the wee hours.

“The best part with this age group is to have the option—they can explore the city at night and not get on a bike in the morning if they don’t want to,” said Lynette Sikand, whose sons are college age and whose family have opted for their second Backroads river cruise trip in two years.

Backroads has separate walking tours for our group that work with our bike schedule and enable us to tour in smaller groups. And rather than big shuttle buses, we take the Metro—our Backroads guides even have gotten us tickets and make sure we know the line to take to return and where to get off.  Nice!

“The tour wasn’t super long and that was a good thing,” said Jackie Clemons, 18, traveling with her dad from New Jersey. “I liked that the morning and afternoon were so different,” she said. “It’s cool what you are able to see and do in just one day, biking and then the city.”

We saw some of Vienna’s most famous sites—St.  Stephen’s Cathedral with its famous multi-colored tile roof, dating back to the 14th Century and standing on the ruins of two earlier churches. Our engaging guide, Elisabeth Steiner, also showed us some less obvious spots—hidden courtyards festooned with flowers, where Mozart lived for more than two years before his untimely death at age 35 on Dec. 5, 1791.

We walked down tiny cobbled streets where locals were sipping wine and iced coffee topped with whipped cream and big pedestrian streets where Saturday shoppers are out in force. Locals and tourists alike were relaxing at the famous Donner Fountain.

Before Steiner left us, I asked for a recommendation for one of Vienna’s famous—but not too touristy—cafés. Her favorite, she said, was Oberlaa, which also makes chocolate.

“I think Sacher torte is overrated,” she laughs. But my daughter Reg and her husband Dan try it anyway. When you are in Vienna…. My husband opted for another concoction with plum preserves. And I was very happy with my iced coffee which besides whipped cream had ice cream in it. Yum!

For information on 50 best coffee shops in Chiang Mai, check this out.

I thought I deserved it after my morning ride—and figuring out my E-bike (even on an electric bike you are pedaling the whole way!) and the Garmin device that is programmed with our routes. “The kids get how they work right away—it takes older people a few days,” our guide Martina Quintana Madeheim reassured me.

She was “sweeping” the group on the bike trail when I had stopped trying to figure out how I had gotten off-route (we also had paper directions).

It was a pretty ride, mostly along the Danube, past swans and cottages and locals out for some Saturday morning exercise, whether pushing a stroller, walking a dog while on rollerblades, jogging or biking. It was fun to be away from the crush of tourists!

It was fun to gain confidence with unfamiliar gear.

I thought about my morning accomplishment as I slurped the last bit of my iced coffee and smiled.