In Vienna with “Adventures by Disney” 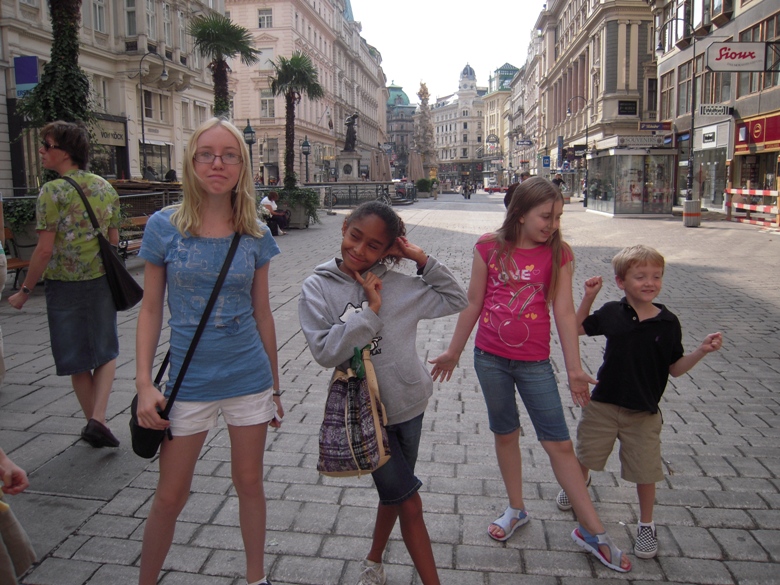 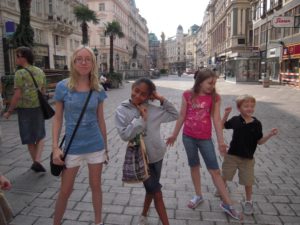 THURSDAY JULY 31 — We’ve arrived in Vienna to join our “Adventures by Disney” trip. There’s not a Mickey Mouse in sight but before we even grab our bags from the luggage carousel, there’s someone holding a sign with our name on it to grab them for us. We meet 23-year-old Trevor Enderby, one of our two guides for the week, who whisks us to our waiting car and to the hotel where our other guide, Alex Kemper is waiting to greet us at the Marriott Vienna. Our room isn’t ready, she tells us (it’s not even noon yet) but she already has a map of Central Vienna folded just so and maps out some suggestions for our afternoon and for lunch. I could get used to this kind of service!

And that’s exactly the point-to not only de-stress family travel abroad but to play to the kids’ interests with special activities (ready to see how royal children lived two hundred years ago?) while making sure parents have time to enjoy themselves too.

That’s why seven families (31 0f us in all, nearly half kids) from around the country — from Connecticut and Ohio, Indiana, San Diego and Los Angeles — have signed up for this week-long tour of imperial cities — Vienna, Salzburg and Prague. There are nine kids 12 and under, some as young as six and another five teens. Certainly a trip like this can cost more but the families think it’s worth the price to have someone else sweat the details and design an itinerary with the kids in mind. Besides, they were able to pay in U.S. dollars and that’s no small thing when traveling to Europe these days. We even get a handy guide complete with itinerary, photo tips of the day and Mickey’s helping hand tips as well as a word of the day (Wikommen is German for welcome, the kids learn).

I’m traveling with my 17-year-old daughter Melanie and her friend Hayley Jacobs. Though they’re the oldest, they’re enjoying all the service too and can’t wait for some of the adult activities. We head out for the afternoon to explore Vienna a bit. We gawk at the Habsburg crown jewels and the cradle used by Napoleon’s son in the Schweizerhof Museum, the oldest part of the Hofburg Palace. We eat lunch nearby at the famous Demel café. The girls are especially taken with the open-faced sandwiches and the pastries-like the pink meringue Rosenmacron and the luscious chocolate cake. We tour the spooky catacombs at St. Stephan’s Cathedral with bones piled upon bones.

And when we get back to the hotel, our Adventures by Disney guides are waiting. They’ve already run interference for me because my room still isn’t ready. I like this kind of service!

Ross and Heidi Guberman are traveling with six year old Meghan and eight year old Sean as well as Ross’s dad Todd. They, like the Williams family, wanted a trip that would appeal to kids as well as to seniors. “We thought Disney would take good care of all of us,” said Ralph Williams, who is from suburban LA.

The Bauers, from Toledo Ohio, are so sold on the concept that they are taking a second Adventures by Disney trip in Germany as soon as this one ends. “When you are going someplace where you don’t speak the language it’s definitely a lot easier.” Another plus: Their eight year old daughter Katherine already has made a friend. “We won’t have to entertain her 24/7,” he says, relieved.

There’s a delicious group dinner at the hotel to allow the families to get acquainted. (The desserts are especially yummy — but this is Vienna after all.)