Interacting with the Turtles at SeaWorld Orlando 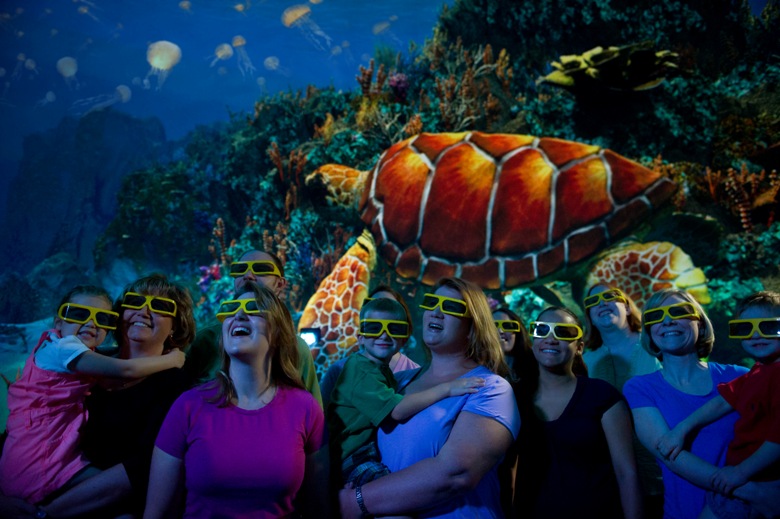 I can’t stop thinking about Grandma.

She’s only in her 20s, and not really a grandma; she got the name because she was unfortunate enough to lose her teeth.

Oh, did I mention that Grandma is a sea turtle that lost her entire lower jaw when someone cut it off to retrieve a fish hook?

Horrible, I know, but Grandma is pretty lucky all things considered. She was rescued four years ago and nursed back to health and now lives at SeaWorld Orlando where sea turtles are the showcase of the newly opened TurtleTrek, a one-of-a-kind attraction designed to share the sea turtle’s journey from hatching on the beach, racing to open waters, facing hazards — like unscrupulous fishermen and boaters — and then, if they’re lucky, returning to the same beach to lay their eggs. There’s also a call to action. (If you stop using plastic bags — as SeaWorld plans to do in the next year — that will keep many animals from being impacted by plastic that ends up in the ocean.)

In the nearly 50 years since SeaWorld’s rescue programs began, more than 20,000 injured, orphaned and sick animals — whales, dolphins, seals, sea lions, manatees, sea turtles and birds — have been rescued, cared for, and in most cases, returned to the wild.

Now, just as SeaWorld brought attention to the plight of the manatee — and you will see rescued manatees here as well — the park now showcases the vulnerable sea turtles like Grandma in the brand-new TurtleTrek exhibit. Besides actually seeing these amazing creatures in person, you can see a 3-D/360-degree film (even projected overhead) that features a sea turtle (the hero, of course) and thousands of fish. This six-minute movie is so hi-definition it would take you nearly three months to download it at home.

In addition, more than 1,500 fish native to the Caribbean live in the saltwater habitat and approximately 200 freshwater fish join the manatees in theirs.

TurtleTrek is home to adult and juvenile sea turtles, including hawksbill, Kemp’s Ridley, loggerhead and green sea turtles — all of whom, like Grandma, have been deemed nonreleasable by the Florida government.

The aim, of course, is to release as many as possible. Since 1980, SeaWorld Orlando has returned more than 1,200 sea turtles back to their natural waters. SeaWorld’s animal rescue team, in fact, is on call 24/7. (Check out www.seaworldcares.com/conservation. To find out more about marine animals, visit www.seaworld.org.)

Recently, I got a peek at SeaWorld’s extensive rehabilitation area that is as well equipped as many hospitals, offering operating rooms, X-ray machines, a pharmacy and experts who consult on animal care with veterinarians and human doctors around the world. Imagine giving a 3,600-pound manatee stitches or setting a tiny frog’s broken leg! (You can sign on for such a behind-the-scenes tour ($30 for adults, $10 for kids 3 to 10) as well as other special experiences to get closer to these creatures, including interacting with a Beluga whale or a dolphin, being a marine mammal keeper for a day, as long as your kids are 12, and VIP tours that enable you to cut the lines. For more details, log onto http://seaworldparks.com/en/seaworld-orlando/attractions/exclusive-park-experiences.

You also have the chance to swim with a dolphin, snorkel with sting rays and tropical fish and feed exotic birds at SeaWorld’s sister park Discovery Cove where Freshwater Oasis is just opening, giving you a chance to wade and float and discover marmosets and Asian otters along the way. This place is all inclusive and only allows 1,000 guests a day — no worries about lines here — so reservations are a must. (Prices start at $199 a person and include the dolphin swim, food and drinks and unlimited admission to either SeaWorld or SeaWorld’s water park Aquatica or Busch Gardens Tampa Bay for two weeks — not a bad deal since SeaWorld daily admission alone is $81.99 for adults.)

I even had the chance (for an extra $59) to take an underwater walking tour — wearing a dive helmet to get up close to nurse sharks, baby rays, octopus and schools of tropical fish — a lot more than you likely will see snorkeling or diving. “You don’t even have to try to look for them, they’re all right there,” said Constance Critchlow, visiting from London.

All of Orlando’s parks offer new attractions this spring and summer, like SeaVenture and TurtleTrek. (For details, see my blog about Orlando.) If you are considering a trip, come in May or June before the parks get too crowded and the weather too hot. You might snare a better hotel deal too, with rooms under $100 a night. (Visit www.visitorlando.com for the latest deals.)

Families visiting SeaWorld, meanwhile — and yes, Shamu is still a top attraction — get that this is more than a place for rides, though there is Manta, the flying roller coaster, the first of its kind, Kraken, Orlando’s only floorless coaster, the water-coaster Journey to Atlantis and, for younger children, the popular Shamu’s Happy Harbor.

“So much better than just rides,” offered Erin Hollenbacker, here with her sons from Ohio for their first visit to SeaWorld. “This is completely different and all of the animals really capture their attention.”

“It’s been very educational,” added Sheila Burnett, here from Illinois with her granddaughters.

Education, of course, is as big a part of SeaWorld’s mission as is conservation. The entertainment — whether it’s One Ocean, SeaWorld’s killer whale show, “Clyde and Seamore Take Pirate Island,” which showcases sea lions, otters and walrus or the chance to visit the Dolphin Nursery — is all designed to nurture interest in marine life and how we can protect it.

Park officials like to remind visitors that just by coming, guests are helping to rescue and protect animals all over the world, since SeaWorld and Busch Gardens have contributed $50 million to conservation, wildlife rescue and environmental programs.

“You have to keep your eyes on the dolphins,” advised 10-year-old Morgan Jones from Chicago. “They are really funny! I like SeaWorld best of all the parks.”

Who says learning can’t be fun — even on vacation!