Into the Costa Rican rainforests 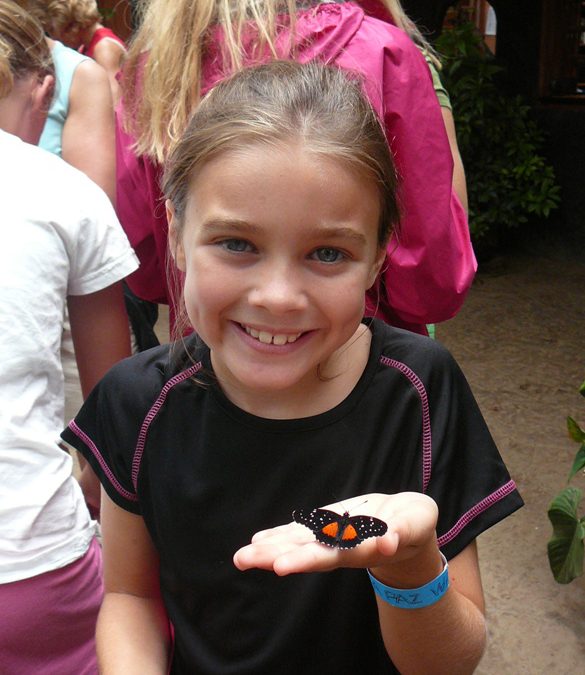 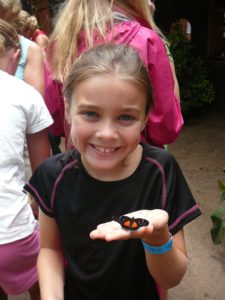 DAY TWO — What’s the best part? Humming birds… scores of butterflies or thundering waterfalls? Each of the kids has an opinion. We’ve spent most of the day at La Paz Waterfall gardens (www.waterfallgardens.com) about an hour and twenty minutes from downtown San Jose, Costa Rica where the kids have alternatively had butterflies — the gorgeous blue Morpho, the yellow and black Zebra, the orange Juilia, the orange and black Tiger, the Monarch, among others, land on their fingers and their toes. They are snapping pictures. They are totally engaged!

No bored seen-that done-that teens in this crowd. At breakfast, we’ve met the rest of our group from Thomson Family Adventures. We are four families with eight girls aged eight to 16. There are two other moms traveling solo with kids and a family with three girls from Los Altos, CA. The dad, Jeff Purnell jokes that he’s used to being outnumbered by women.

Patty Zebrowski, who is on a mom-daughter trip with 13 year old Emily Wolfram — as she has with her two older daughters — is glad, as am I to have someone else leading the way.

In our case, our guide Gaston Trojillo, a 19-year- veteran and himself the father of a six year-old has the perfect tenor to engage the I’ve-seen-it-all teens and tweens. Along to help is Shirley Sequerira whose job is specifically to engage the kids. It’s not hard. They are captivated by the butterflies (did you know they only live three weeks? That most die before becoming butterflies?) The hummingbirds (Costa Rica has 24 different species, the most in the world) and the rushing waterfalls. “Cool,” the girls agree.That’s high praise from the Purnell girls who had wanted to go to Hawaii. “We had been there and wanted to do something different,” said Cathy Purnell. Jeff Purnell added that even this guided trip to Costa Rica wouldn’t have been as expensive as taking his family of five to Hawaii.

Patty Zebrowski had chosen 7th grade to take each of her daughters on a mom-daughter trip and Emily thought “Costa Rica seemed like the most fun.”
It was fun to watch these oh-so-blasé teens so excited about the butterflies lnding on their shoes and their backs, on the hummingbirds-they move so fast it was a challenge to snap a photo—and then the 120-foot waterfall. Decidedly different, they agreed. Very cool.

The guides made it easy by having Cokes and snacks (Costa Rican chocolate or Plantain chips anyone? On hand.

After lunch (not the easiest for the finicky eaters in the group who subsisted on pineapple and french fries, foregoing the rice and beans and corn tortillas — we arrive at our home for the next two nights, Suena Azul, about an hour drive from San Jose. The 65-room rustic resort began as a family retreat, explains the 25-year-old Marcelo Lapez, whose family owns the place. He explains that it quickly evolved into an alternative employment option for locals who no longer could find work in hearts of palm factories. There are 1500 acres here complete with horseback riding (170 horses!) hiking, even yoga and a spa (hot stone massage?) not to mention spectacular views from the little porches of our rooms to ponds that are stocked with tilapia, should anyone want to go fishing. We’re going rafting tomorrow-just a half hour a way.

At dinner — steaks and chicken cooked over an open fire served with tortillas (of course) rice and beans (of course) guacamole and salsa (of course) we’re treated to a performance by some of the resident cowboys and their young children. Our kids, though, are more captivated by the tiny kitty they’ve discovered and named “cuddles.” They ignore the local dancers to play with the cat, begging parents to let them bring the kitten to hotel rooms.
“It’s awesome to see the change in the community,” says Marcelo Lopez, saying kids who customarily quit school at sixth grade are being encouraged by parents to continue and to learn English so they can work in the hotel. “This is a special place.”

Despite less than stellar service, the kids pronounce the resort — with its thatched-roof walkways and tiled rooms, “really cool.”
Sure we could have been at a Four Seasons or other lush resort. “But I could do that in the United States,” says Sally Garrett, traveling with two daughters and a 15 year old daughter of a friend. “I came here because I wanted something different. I want to experience the country.”

And we’re definitely getting to do that. It’s barely 9:30 pm, but everyone heads to bed. White water rafting tomorrow… early breakfast.