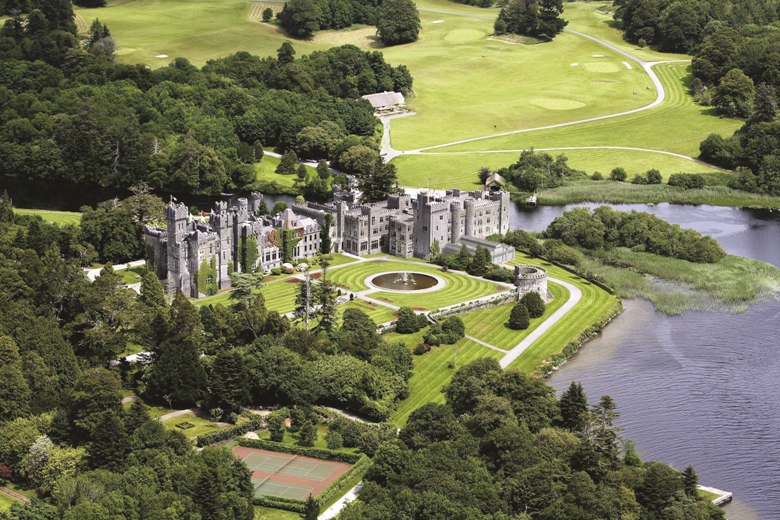 Sure he’d seen plenty of castles in Disney movies and had read stories where castles figured in the plot, but real castles? He didn’t think they existed.

That’s when his mom Erica decided to bring Reed and his older brother Will to Ashford Castle, which is located in western Ireland on 350 acres along the shores of Lough Corrib, Ireland’s largest lakes, and the River Cong famous for its fishing. Reed could not only see a bona-fide castle dating back to 1228, but actually stay there too.

By the second day, it was Will, 11, who was most entranced, especially with the opportunity to learn the ancient sport of falconry. “I want to move here,” he said.

“He’s never said that about any other place we’ve visited,” said his mom, a businesswoman from Michigan.

He’s not the only one who has felt that way. When King George V (then the Prince of Wales) came to hunt in 1905, he famously stayed for two months. (That’s why in the newly renovated hotel there is the Prince of Wales Bar and the George V dining room.)

Owned for over 100 years by the Guinness family, who were respected as kind employers to their tenant farmers and nature lovers, the iconic castle has been a hotel since 1939. After being acquired by family-run Red Carnation Hotels, a $75 million renovation was just completed last summer making it a destination guaranteed for the vacation memory books for all the American families who flock here.

“My granddaughter is a real princess so we had to stay in a castle,” said Connie Abodeely, who organized this trip for her herself, husband and her daughter’s family, including “princess,” Alexis, 10.

“I love it,” Alexis Samano said. “I never got to stay in a castle before.”

And with glittering chandeliers, 800 pieces of art to consider, couches and chairs everywhere to sink into (including carefully sourced antiques) bedrooms fit for — well a princess, complete with canopy beds — and beautiful gardens, it’s a lot better than 13-year-old Gabrielle Samano expected. “I thought it was going to be really old and gross,” she explained. 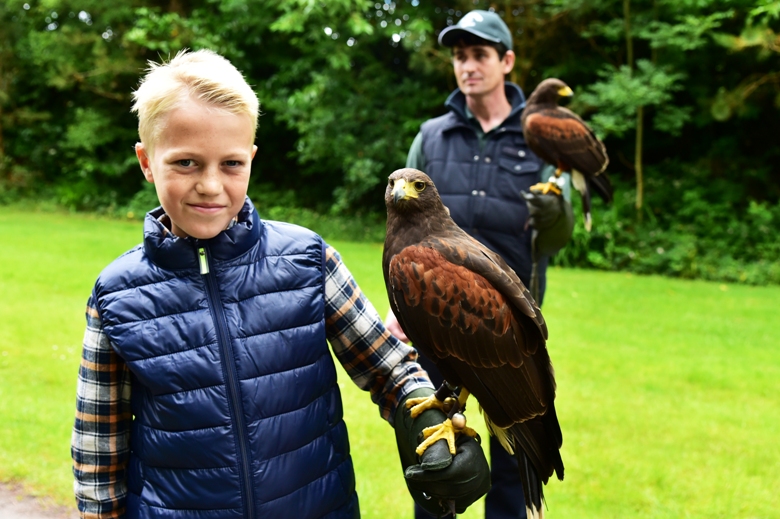 Like many grandparents who opt to travel with their grandchildren, Abodeely explained she would rather leave them with wonderful memories and experiences than money. “Very expensive,” she said, looking at her grandchildren. “But worth the money.” (Summer rates can be $600 a night or more.) Sixty percent of the guests are American and many are multigenerational families like this one.

There are decidedly modern touches — LEGOs delivered by room service so kids can build their own castle, a new 32-room theater for movies, a spa and fitness center with a big indoor pool and a kids’ game room and pint-sized robes. There is zip-lining, custom children’s books presented to each young guest and two October weekends of Wizard School for young Harry Potter fans, complete with instruction on proper wand etiquette.

But this is also a place to celebrate tradition — learning falconry, the ancient sport of kings, for example (read more about that in my column here) or archery, taking a morning walk with the Irish wolfhounds and their owner, who oversees the Ireland School of Falconry that operates here.

I loved the proper English tea with the three-foot-tall tray of pastries, scones (served with fresh clotted cream, of course) and tiny sandwiches). “The food is my favorite thing,” said Cole Harmon, 10, from California, sitting at the next table with his mom. “There is so much cool stuff here,” he added. “So different from California!”

In addition to the 82-room castle, there is the more casual (and less expensive) 50-room Lodge at Ashford Castle on the castle grounds offering two-story units (under $200 a night in low season. Check out the Christmas packages!) Are you ready to climb a hundred-foot tree? Maybe you’d rather go fly-fishing, clay pigeon shooting, play a round on the nine-hole golf course or take a selfie next to a historic suit of armor. Where else do you have the chance to horseback ride through an “enchanted forest”?

“We were looking for leprechauns,” said Erica Hunt.

Tyler Burne, 11, here with her family and grandmother from Colorado, was especially entranced by all “the old structures.”

Come for Thanksgiving when rates are as much as 35 percent less and there are special family packages including Irish breakfast (have you tried porridge with a dollop of Irish whiskey?), Thanksgiving dinner in the sumptuous dining room. (No dinner to cook or clean up!), a special family photo shot by a professional photographer and the chance to plant your own “family tree” on the estate, among other amenities. (It’s a little over $1,500 for a two-night stay for a family of four.) Another plus: You can clear U.S. customs in Ireland, avoiding long lines when you get back to the United States. And you will find that your dollar will go farther than in past years.

The new Executive Chef Philippe Farneau plans to recreate a multi-acre vegetable garden and to invite guests of all ages to forage with him for wild herbs, mushrooms and more. There’s a special tasting menu for kids or, Farneau said, they can certainly ask for a half-portion. With so much locally sourced meat, poultry fish and vegetables available, he added, “Everything is right for a foodie destination.” No matter their age.

“Every kid should come here. It is really fun,” said 13-year-old Seren O’Toole, who lives here and likes to come run or bike with her dad on the extensive trails cut by the Guinness family and planted with trees from around the world. “You can go for miles on a horse or on bikes in the countryside.” Just be ready, she cautioned, “for wind and rain!”

That’s when you can cozy up to a roaring fire or linger over the extensive breakfast that, in fact, was inspired by Lord Ardilaun, a scion of the Guinness family, who insisted on serving his guests only the freshest of local foods. Think smoked salmon and ham carved tableside. Are you ready for a traditional Irish breakfast with black-and-white pudding, pork sausages, smoked fish rashers, breakfast mushrooms and eggs?

Another scone, please — and one more slice of ham!