It happened at the Broadmoor – reliving an adolescent incident 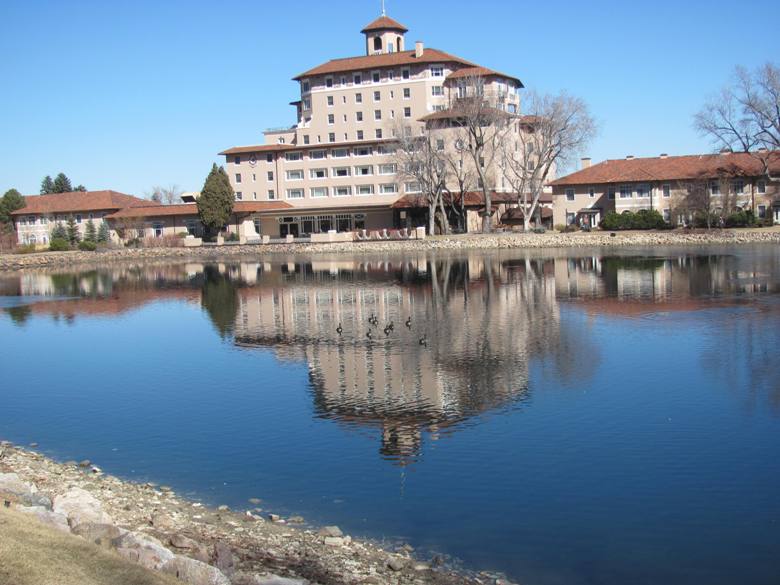 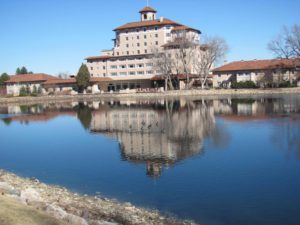 DAY 5 — There’s nothing worse than traveling with a petulant adolescent—especially when the trip isn’t all about her.

It was autumn 2004.  We were in Colorado Springs for my older daughter Reggie’s  freshman parents’ weekend at Colorado College and to enhance the experience—or so I’d thought—we’d checked in to the majestic Broadmoor at the base of Cheyenne Mountain complete with golf, biking, tennis swimming pools and more.

Younger daughter Melanie (then 13) Mel wasn’t interested. She was in a snit because her older sister—who she idolized—cared more about her new college friends and showing off her campus to us than spending time with her younger sister.

Reggie suggested a hike. Mel didn’t want to go. We insisted and set off from the Broadmoor (www.broadmoor.com) —there were several hikes the concierge recommended right from the hotel.  We hadn’t even gone a quarter of mile when Mel declared she wanted to go back to the hotel.

The Broadmoor is a huge iconic series of buildings—744 rooms spread out on some 3000 acres impossible to miss—so we thought. “Go ahead,” we told Mel, tired of her antics. All she had to do was go back down the road. We made sure she had a room key and knew the room number.  Unfortunately, she didn’t have a cell phone.

Unfortunately, we didn’t bargain for the winding mountain road to be confusing to a 13 year old. We’d forgotten about the fork in the road.

We enjoyed our hike and fully expected to find Mel back in our room when we returned about two hours later. She wasn’t.  And she wasn’t getting a snack or at the pool or watching the ducks on the pond.

While my husband and older daughter got in the car and retraced our route, I called hotel security. No Mel on the expansive hotel grounds.  Every bad thing that could happen was in my mind. Had she been kidnapped? Had she fallen and broken an ankle? (She actually had done that before—twice).  I called the police.

I fretted and worried and felt terribly guilty.  After what seemed the longest two hours of my life, I got a call from the hotel security—they’d found her! She had somehow ended up at the Cheyenne Mountain Zoo –about a mile and a half from the hotel. Too shy to ask anyone for help, she somehow figured her way back. Luckily it wasn’t cold or raining.

Six years later, we told that story to Mel’s housemates at Colorado College. Yes, she followed her sister to the first-rate liberal arts college and we took a detour during a 10-day ski trip to visit CC where Mel is living in Synergy House—a campus house where eight students live as greenly as possible.

We cooked dinner at the house last night and then returned to our hotel—The Broadmoor.   It is the first time since that nearly disastrous trip that we’ve opted to stay here again, though we’ve been to Colorado Springs many times.

I’m glad we did. Not only is the hotel beautiful and the service stellar but it serves as a reminder to how much our baby has grown up—now a confident college sophomore joining me later for a massage at the spa here and then dinner.

The Broadmoor opened  in 1918, founded by Spencer and Julie Penrose, and has been attracting generations of families ever since. Parents return to a place they were taken as children; grandparents bring their families back to where they were married or honeymooned.

When Penrose was alive, he had a private zoo on property—you could have an elephant ride on property. That private menagerie ultimately became the Cheyenne Mountain Zoo, America’s “highest” altitude zoo at 6800 feet about a mile and a half from the hotel. Today during summers and holidays, there’s the Bee Bunch Children’s Program, tennis camp, horseback riding 20 minutes from the resort, indoor and outdoor pools including water slides and hot tubs.

I’m sure the families who return here revel in the memories of past trips to this iconic resort just as I am.

Melanie is dressed for dinner at The Summit, a hip American Bistro that was just opened a few years ago. Three of her college friends join us for a delicious dinner including filet, trout and pork.  I had a fantastic dish described on the menu as “angry trout.”

Was this young woman ever that difficult a teen we wondered as she showed off her digs (yes, she admitted, she’d cleaned up just for our visit.)  Vacations, of course, are a lot about memories. But there’s something to be said for returning to places where things might not have gone as planned—and let’s face it, they often don’t on family vacations.

Here’s an opportunity to measure how much your kids have grown and changed in the interim. You’ve probably changed too. Here’s a chance to revel in those memories when they were younger—and create new ones.

We smile now thinking of that petulant teen (it was our fault, of course, that she got lost in the first place, of course)   We’re  grateful nothing happened to her that day—and I never let her go on her own without a cell phone.

But I’m especially grateful for the confident young woman she’s become. She and her brother and sister tell me that all of our travels—and our misadventures along the way—have contributed to their confidence, have made them comfortable outside of their comfort zones and have showed them that they can manage when things don’t go as planned-when they get lost or sick or a destination doesn’t live up to expectations.

Thanks Broadmoor for contributing to that lesson.

Next:  On to Aspen and first tracks