It wouldn’t be the Caribbean without cigar making 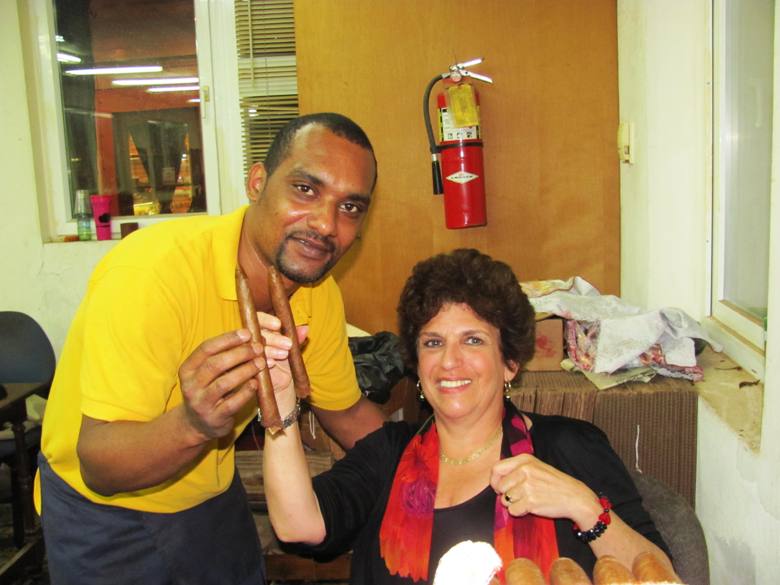 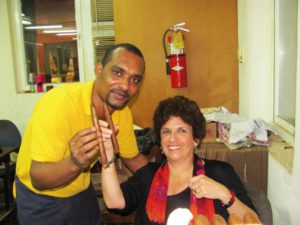 I’ve got aromatic tobacco leaves in my hand—Seco for the aroma, Volcado for the combustion and Legero for the strength and I’m trying my hand at rolling a cigar,  “bunching” the leaves in my palm and then wrapping them in a binder leaf, “gluing’ them with a tad of sap.

“Very good,” says Yovani Llacobetlima, who at age 34 has been rolling cigars for 11 years.

We’re at the small cigar factory at Graycliff, a historic mansion dating back to the 18th century that is owned by Garzaroli family.

Sixteen master rollers from Cuba turn out a million cigars a year, Enrico Garzaroli told me, sitting in the comfortable living room area before dinner as a musician played the piano. He began with a single roller in the restaurant entrance blended by Torcedore Avelino Lara, who was once Fidel Castro’s personal roller. He just died last year. Now you can choose seven different blends with tobacco that comes from Nicaragua, Honduras, Ecuador Dominica Costa Rica and Brazil. You can sign on for a half hour lesson and a rum tasting.

I’m in awe of the rollers who can finish a cigar in four minutes!  Yovani tells me to press hard and squeeze.  All by feel.  Of course I have no idea what I’m supposed to feel—just feels like crumpled, dry tobacco in my hands. I’m amazed when we’re done that I actually have a cigar in my hand.

Garzaroli tells me he never planned to own a hotel in the Bahamas—known for its restaurant and wine cellar (with some 250,000 bottles it is one of the largest private collections in the world). He and his wife Anna Marie ended up buying the mansion in the early 1972. “I didn’t even know I’d bought it till my banker told me,” he joked. Yet he was trained at hotel school in Switzerland—when his dad told him to find something else to do besides the family factory.

The house has a storied history –including a time when a mistress of AL Capone’s lived here. ”There are worse places in the world to live,” he said.

There are just 20 rooms and the first swimming pool on the island but the dining rooms can seat 300 (including a table in the storied wine cellar). We’re treated to a gourmet feast — crabs legs, tenderloin, and cappuccino cake. The restaurant, we learn is the first five-star restaurant in the Caribbean and is open for lunch as well as dinner in the charming dining rooms set with candles and some overlooking the gardens. Garzaroli, a grandfather, welcomes kids. “We have so much room we can put them where it doesn’t matter if they make noise,” he said.

Today, he tells me, the cigars are well known in the U.S and are sold in some 800 shops across the country as well as online. His son Paolo has joined the business while his daughter lives in New York.  He’s building a new house on Paradise Island.

“There are a lot worse places to end up,” he says.

NEXT: Dancing with Dolphins