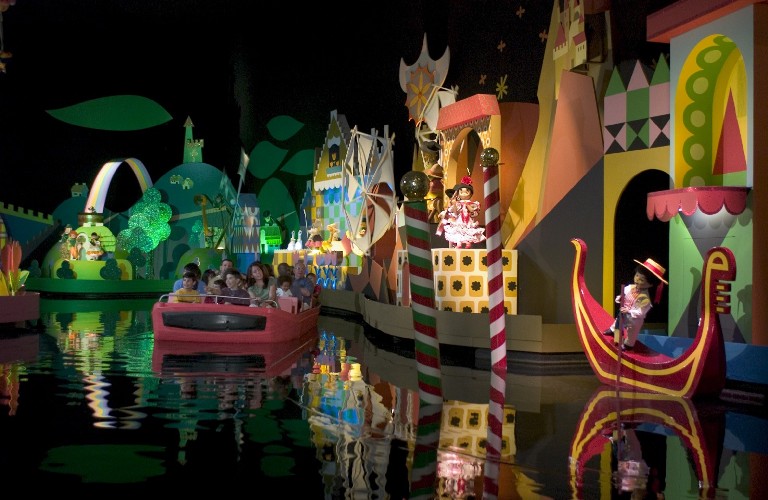 “Look, Look!”  the excited three-year-old kept saying.  Her parents and grandparents were singing along to a tune they’d known since they were kids.

It was a sweet moment at Walt Disney World when all was right with the world, despite the drenching rain outside.

We were all dry—and all smiles on the “It’s a Small World” attraction that has been entertaining and inspiring millions over the past 50 years since it was first  premiered at the 1964 World’s Fair in New York City after being created by Walt Disney and his team.  He was asked to built the exhibit to salute UNICEF and children around the world.

In the attraction, hundreds of dolls dressed in costumes from around the world sing “It’s a Small World” in five languages (English, Italian, Japanese, Spanish and Swedish.) as guests ride in boats through the regions of the world—rain forests and deserts, European cities, Asia, among them. We pass the Taj Mahal and flying carpets, Japanese kids flying kites, laughing hyenas, children dancing in Mexico, surfer kids and Eskimo kids….

Today, the attraction still has resonance and is very popular at Disneyland Resort in California (where the World’s Fair attraction was relocated in 1966); Walt Disney World in Florida; Tokyo Disney Resort in Japan; Disneyland Paris in France, and Hong Kong Disneyland Resort. Check out the special It’s a Small World 50th Anniversary Website where kids can record themselves singing or creating a virtual doll that will benefit UNICEF, the United Nations Children’s Fund. The Walt Disney Company is donating $150,000 to benefit UNICEF in honor of the 50th anniversary, plus $1 for every sing-along video recorded and another $1 for every virtual doll created, up to $1000,000.

The message especially resonates in the world we live in—where children sing of “a world of laughter…a world of hopes…a world we share.”