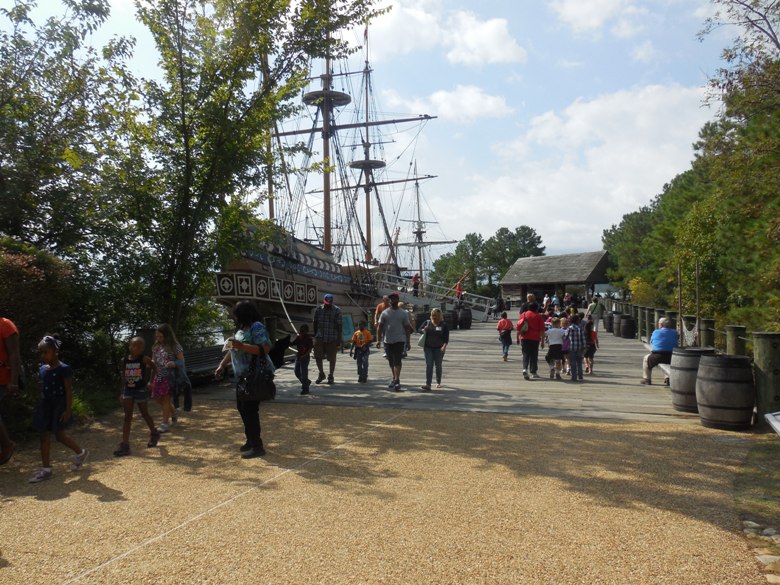 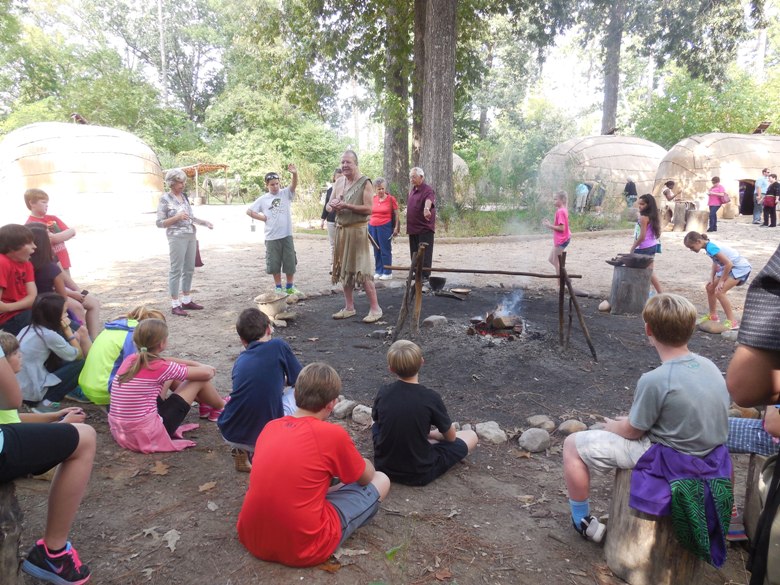 WILLIAMSBURG, VA. (Day Two) — If Laura Ann James could time travel back in history, she’d choose to live in a Powahatan Village in Virginia. “Life was so simple then,” she explained.

Laura Ann and her family, from Alabama, were visiting the Historic Triangle of Virginia where they could visit Jamestown Settlement, Yorktown Victory Center and Colonial Williamsburg, learning American history with the help of interactive activities and costumed interpreters.

Here kids can pound corn kernels into meal, see how deerskin was processed to make clothing, see how Powhatans made canoes and more.

At the recreated colonial fort, kids play ninepins, try on armor and watch as an interpreter fires a musket.

The day we visited, one interpreter was making stew over an open fire while another was explaining the arduous process of making needles from deer bones.

“No pillows?’ one youngster asked when spying the decidedly uncomfortable straw mattress the first settlers slept in at the recreated fort.

Kids can steer with a tiller aboard the recreation of one of the three ships—the Susan Constant, Godspeed and Discovery that brought   104 men and boys to Jameston in 1607. See how cramped the quarters were as they traveled across the ocean in 1607. The recreated Settlement is adjacent to the Colonial National Historic Park.

The Jamestown colony was sponsored by the Virginia Company of London but the settlement faced great challenges and ultimately became viable once tobacco was cultivated as a cash crop.

This is the place to start a visit to the Historic Triangle—and to teach a lesson in tolerance in the process as you learn the trials and tribulations of the settlers and the Powahatans learning to coexist. The colonists located their outpost in the middle of about 14,000 Algonquin-speaking Indians ruled by the powerful leader Powhatan, Pochantas’s father. There are also exhibits devoted to the first slaves brought here as early as 1619. There are hundreds of artifacts in the galleries—portraits, toys, tools.

But more of the action is outside, including the seasonal riverfront discovery area with discovery station along a pathway explaining how important the James River and transportation were .

There is a celebration of 18th Century Virginia foods at Yorktown Victory Center the same weekend where you can trace what was grown on a 1780s farm from field to kitchen. See how the Continental soldiers turned their dried beans, salted meat and hard bread into soups and stews.

“I learned how to fire a canon,” said Daniel James,10. He also learned that soldiers had to have all their front teeth or they couldn’t tear open the gunpowder sacks.

Depending on when you visit Jamestown Settlement or Yorktown Victory Center, you might meet junior interpreters—local school children among over 200 volunteers in historical dress.

Work is now underway on transforming the living history museum into the American Revolution Museum at Yorktown with expanded exhibition galleries and new outdoor features.

Yorktown, of course, was the site of the climactic battle of the American Revolution in fall, 1981, when the allied armies had the British army trapped and the land routes blocked. Cornwallis had no option but to surrender.

“We find that this (experiential learning) stays with you for a long time,” said Homer Lanier, the Site Manager.

If only school could be this much fun.

Ready to help hoist a sail?