JetBlue and the Terrible Day at JFK 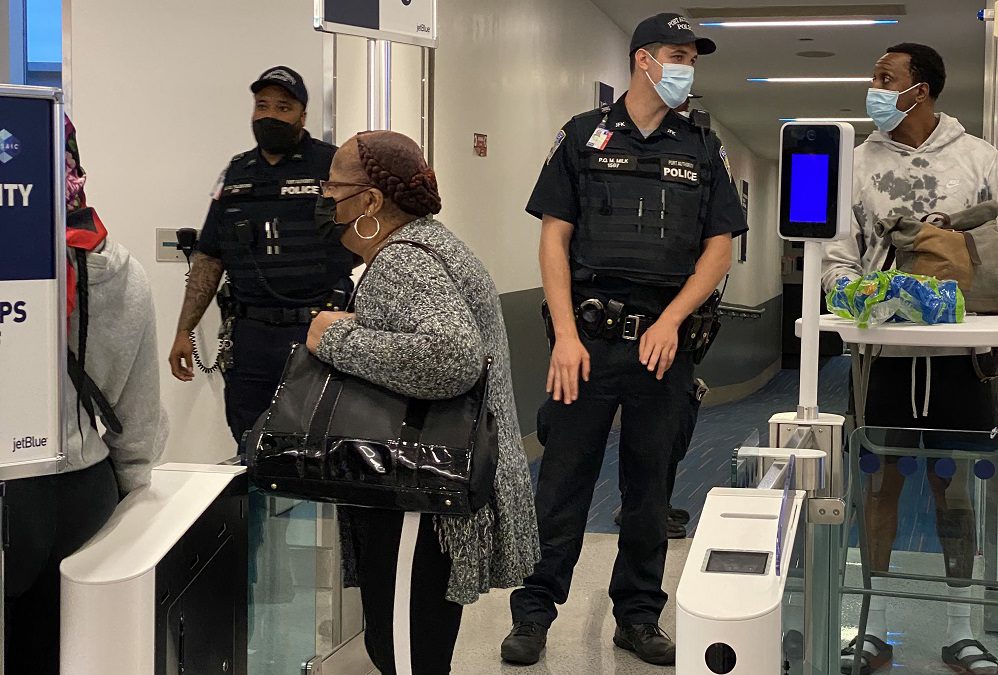 Special to Taking the Kids

The last time my fiancée and I had flown was late February 2020, right before COVID exploded into a global contagion. My fiancée and I, freshly engaged, trying to grapple with what to do with our wedding and keep our focus on our jobs and other pursuits at the time, buckled down and worked hard for a year and a half through the pandemic. Finally, with vaccines and case numbers dropping, we meticulously planned out a family trip to Jamaica with my parents.

This is where the story takes a strange twist. What should have been a simple 3 ½ hour direct flight from JFK Airport in Queens, NY, to Montego Bay, Jamaica, turned into an all-day and night travel odyssey that left even the most experienced and savvy traveler frustrated, angry and exhausted.

Here is a rundown of the day:

8:30 AM ET – We arrive at JFK airport to find JetBlue’s ticket check-in area is a chaotic mess. Seventy-five percent of their self-serve kiosks aren’t working, even the ones that are working can’t seem to find our reservation. We had the added complication of my fiancée, Elodie Kremer, who has a French passport, which the JetBlue machines couldn’t seem to read because the French birthdates are in reverse order. We are told to wait in a line to see an agent. The line is not moving and would have taken 3 hours. We are finally able to get our boarding passes through the JetBlue app on our phones and head for TSA.

11:30 AM ET – We make it to the gate and JetBlue flight #479 is boarded. It’s a full flight. There is a group of 40–50-year-old women off on their first girls’ trip since the pandemic. There are a few young couples, either getting away or going to visit family in Jamaica, there are several elderly couples, also going to visit family. There is a mother of six, who told us this is her first sans-kids break in 2+ years.

12:20 Original departure – Now 1:30 PM ET – Flight is fully boarded and pulled back from the gate and has been sitting on the tarmac for over an hour. The captain comes over the PA and says he has a wheel brake caution light in the cockpit, and he must take the plane back to the gate. There were some understandable groans from the passengers.

2:30 PM ET – Plane is back at the gate, we are all notified that this plane won’t be able to fly today, we need to get off, and there will be another plane for us in a couple hours.

4:30 PM ET – We are told to board the second plane. After boarding, the plane sits at the gate for over an hour, until the captain comes on and says there is a problem with the fuel sensor in one of the wing’s fuel tanks and the FAA won’t let him fly. More audible groaning from the passengers this time.

6 PM ET – We are told the second plane will not be cleared to fly today and we have to de-plane again. No information is given about when the next flight will be, or if there will even be a flight today.

7 PM ET – We are finally told to board a third aircraft, which we are told is a bigger plane, with a capacity of 206 seats, for the 150+ people there, so everyone could spread out and head to Jamaica, finally, after nearly 8 hours of delays.

BUT, no pilot ever boards the flight.

8 PM ET – JetBlue Customer Service Supervisor, who wouldn’t give us his last name, and not the pilot, comes on the PA and tells us the crew for this flight is timed out and it’ll be another 2+ hours before they can get another crew onboard, and they need everyone to deplane yet again. At this point, understandably, the passengers, including us, erupt in shouts of anger and frustration. As we deplane, there are four-armed Port Authority police officers waiting at the gate to presumably act as necessary.

9:30 PM ET – There is a large scrum happening at Gate 9 as the 150+ passengers are just trying to get answers and JetBlue does nothing but bicker with the passengers and treat us like we aren’t paying customers or aren’t even humans really. What happened to professionalism and the customer always coming first? What happened to empathy? Why do airlines seem to go out of their way to treat passengers with disrespect?

Numerous families were saying their COVID tests (required by Jamaica within 3 days of entry) expire tomorrow and what are they supposed to do? How are they going to get new tests, and pay for new tests? JetBlue supervisor doesn’t know.

Another family wants to know what they are supposed to do about their resort reservations, since they just missed an entire day of vacation. JetBlue doesn’t know.

An elderly lady wants to know what she is supposed to do about her relatives who are meeting her in Jamaica. JetBlue doesn’t know.

A not-great hamburger at JFK airport costs $25. The vouchers don’t’ cover any liquor either.

By now, passengers are fed i[. One passenger erupts at the JetBlue supervisor, to which the JetBlue Supervisor turns to an armed cop and tells the cop to handle the passenger. I didn’t realize it was the purview of the Port Authority Police, a taxpayer funded entity, to pick up the pieces from completely inept and pathetic customer service by JetBlue, but apparently, it is.

Then the call comes that the flight has been cancelled for the night, no crew is available, so JetBlue offers a $400 travel credit (less than the actual cost of the flight) and hotel vouchers at cheap airport hotels for the night and a rebooking on a 7am flight the next morning. As I type this, I’m sitting on the 7am flight, which isn’t even half full, this from a completely full flight the day before.

Here’s the thing, I can totally understand: that it’s probably difficult for airlines right now, as they ramped down operations during the pandemic because of lack of demand. then with vaccines everyone wants to travel, so they must push planes and crews back into service. And, just like restaurants and lumber mills and many other businesses in other industries, they are understaffed and there are delays. But we, as taxpayers, paid the airlines $25 billion to keep them in business during the pandemic. The first couple of mechanical delays are understandable. but the blatantly pathetic and rude attempts by JetBlue staff to not help their paying customers, was frankly, inexcusable, exhausting, and traumatizing.

If we had gone to eat out at a restaurant, we were told to be seated, and then waited 12 hours at a table while the restaurant told us things were broken in the kitchen and they couldn’t find a chef, we would justifiably leave and likely never go back to that restaurant again.

In the end, we made it to our destination the next morning. There were about 150 passengers on the original flight the day before. The next morning that number had dwindled to about 50. We surmised that some may have just given up, and others couldn’t make the early morning flight because their vaccination dates had expired.

The real question is why did JetBlue treat us, paying customers, with such hostility?

Towards the middle of the scrum at the gate I was chatting with one of the Port Authority Cops who showed up to provide security, and as he said, “this is happening all the time now.”

JetBlue, Airlines, Airport Professionals, if this is happening all the time, that’s a serious problem.

(Matt Yemma is the son of Eileen Ogintz, creator of Taking The Kids)