Jivn’ Jellyfish to learning to be a DJ 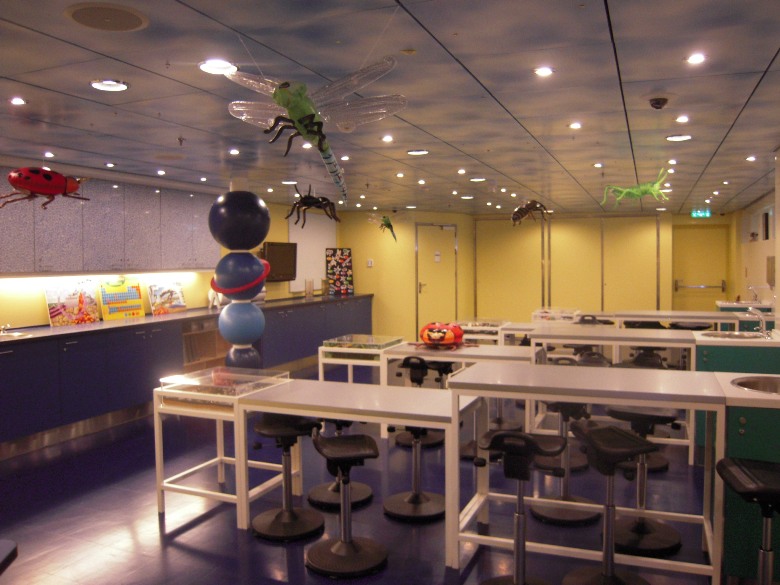 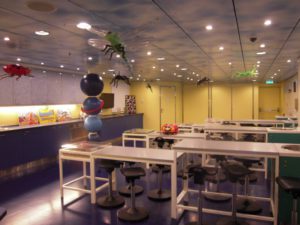 Kids rule aboard Oasis of the Seas, Royal Caribbean’s new megaship. There are designated areas on board for arts (partner with Crayola); science experiments (want to learn about volcanoes, bugs or global warming), and an awesome kids’ theater where Broadway veteran John Tartaglia has developed a puppet show that is performed by the youth staff, who all incidentally have college degrees in education, recreation or related fields AND three to five years working with kids.

“For kids, this may be their first introduction to live theater,” he explains.

And just as adults have a lot of choices on board so do the kids—different spaces for different ages (with teens on an entirely separate deck in a space that backs onto the sorts deck so they have a place to play Nintendo Wii as well as basketball, a place to get on the internet as well as play ping pong or mini golf.  There is a “mocktail” bar and a place to grab a burger right outside. “They really never need to leave this area,” says manager Jenny Beaudoin, adding that there are two designated Teen specialists on board who are up on the latest music, trends and just are all around cool.

Speaking of teens and tweens, parents will love the new device that you can now rent for roughly $18 a week that allows your kids to call you from a house phone anywhere on the ship—or their own device, where you can track where the under-12 set are by the chip in their Adventure Ocean bracelet and the teens by the location of the phone. You can also text back and forth. So you really can let them have the run of the ship—and keep tabs on them at the same time.

At the other end of the spectrum, Royal Caribbean has introduced its first nursery at sea. For an extra charge ($8 an hour) you can leave your babies and toddlers starting at 6 months for a couple of hours so you can go to a spa treatment or an adult dinner—even for a shore excursion. Just make sure to book your space as soon as you board because they can only care for 18 kids at a time. “We guarantee that every family who has children under three will get some hours,” promises Jennifer Boon, who manages the nursery.

Through a partnership with Fisher Price, the nursery and preschool area is stocked with the latest toys and there will be daily sessions for parents to come and play with the kids too. “If you can think of anything made by Crayola, we have it on board,” says manager Beaudoin, who has staff to train the youth counselors, as has Fisher Price .

The Royal Caribbean executive who oversees all of these programs, Charles McDonald, notes that only 1 per cent of the children cruising are under three—roughly 35,000 a year—but that those young parents have been asking for such a facility for a long time.

Whatever the kids ages, the counselors will feed them lunch and dinner if you want an adult evening out and keep them into the early hours of the morning (an extra charge after 10 pm) so that you can party or hit the casino—and there is every variety of music and club on board as well as a late night Comedian.

It’s easy to understand why Royal Caribbean pays so much attention to the kids—they carry 350,000 a year “And we know if the kids are taken care of, and are happy the parents will be happy,” says McDonald.

But as good as Adventure Ocean is–and the space is huge and well equipped—there are other terrific family areas on the ship like the Boardwalk with its carousel—first one at sea—the chance to build yourself a sea pet, grab an ice cream sundae or watch synchronized swimmers and divers and water acrobats at the AquaTheater, the first ever aquatic amphitheater at sea. There will be water shows with fountains and lights too.

Here’s also the place to get your face painted, buy some candy or grab a donut. Go rock climbing (I like that rock climbing, the flow riders and the zip line don’t require an extra charge.

Families with young kids will spend hours at the H20 Zone, with a giant colorful octopus with water-spraying tentacles there are separate wading and a lazy river pool as well as a dedicated infant and toddler pool where it’s OK for babies to swim with diapers.

Every day, more than 500 activities will be offered—including many that are family specific. There will also be surprises—street performers in the Royal Promenade, for example. They seem to have thought of everything—now it’s just a question of how it will all look when the ship is packed.