Just a couple of teens on a Disney Cruise 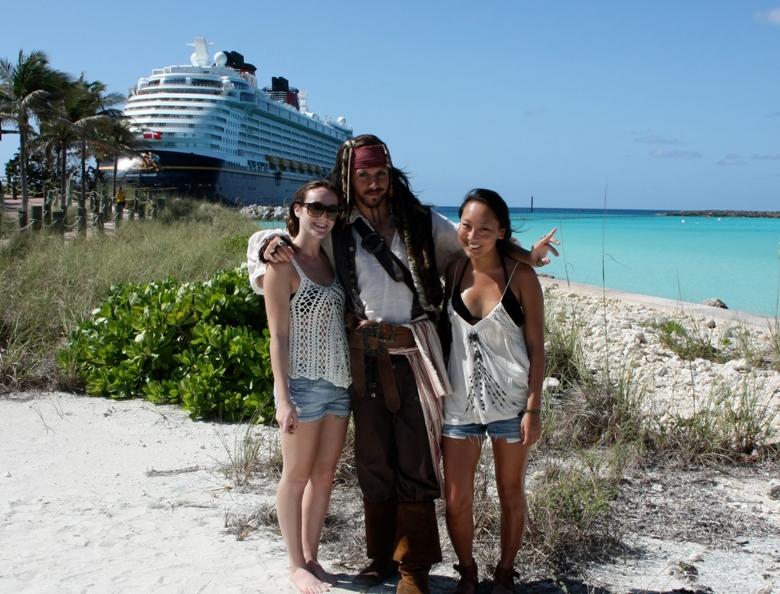 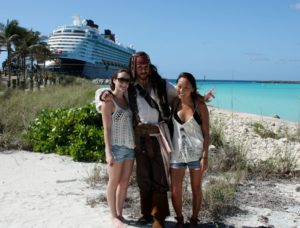 Cam and Eva with Jack Sparrow on Castaway Cay

We woke up early the second morning on the cruise, so ready to soak up the sun at Disney’s island in the Bahamas, Castaway Cay all day. Dana (Eva’s mom) and Eileen had already left for Serenity Bay, the adults-only, much more quiet beach, and left us only with a reminder to bring our Wave Phones (two per room, phones that are usable while on the ship and on the island because cell service is non-existent) with us.

We swiped our Key to the World cards at the exit only to be told that we weren’t allowed off the boat. Parents, this is for you, if you want your children (under 18) to be able to get off the boat without you accompanying them, remember to sign the waiver first. After correspondents on the island walked around the beach for a few minutes, they found (Eva’s mom) Dana and Eileen to get permission for us to leave and we were off!

Jack Sparrow greeted us, along with crystal clear, bright blue waters and white sandy beaches. We walked past the first beach because it was a little crowded, but found chairs AND, much to our content, a water slide at the second beach. Walking on the beach, we noticed that the sand that had been baking in the sun all day somehow stayed cool, something we thought only Disney would think of engineering. After we had lay out on the beach for a while, we decided to explore the island.

There is a tram on Castaway Cay that makes it easy to get from the kids beaches and stores to the adult beach and the 5k trail; they run about every 4 minutes and also go back and forth from the cruise ship. We ended up renting snorkels, and aside from a few technical difficulties with Cam’s snorkel mask, it was overall a great experience.

There were buoys that you could swim out to where there were “sunken treasures”, like a submarine, all crowded with schools of brightly colored fish. We didn’t exactly make it all the way out to the far buoys because of the snorkel mask situation, but from what the guy renting the equipment out told us, there are some pretty cool things to see the farther out you go. For lunch, we went to Cookies Too, where they serve barbecue food like hot dogs, hamburgers (and veggie burgers for Eva!), ribs, etc.

While we ate, we watched a Disney cast member announcing hermit crab races, Kentucky-Derby-style. Families crowded around a little race track drawn in chalk while kids cheered their crab on…pretty entertaining to watch. The food was pretty good, but our favorite part of the island food was definitely the self-serve ice cream. While we had a good day on the island, but felt like a few more days there were necessary because we didn’t have time to do all the other activities we wanted to try (paddle boats and sailing a catamaran for us, but there were many other water/beach things to do).

Back on the cruise ship later that night, there were pirate-themed shows before and after dinner. We watched from the upper deck as Mickey taught his new “crew” how to be great pirates, responding “Aye aye, Captain!” to everything, shaking their pirate booty and having a fierce sword-fighting stance being a few of the things they learned and then beat Captain Hook in a pirate contest with all their new skills.

At the show after dinner, we struck up a conversation with three kids our age. Granted the ship was only half full, meeting other kids our age was relatively difficult. Not to say that it was impossible, (we did it!) but there were without a doubt more kids in the toddler and early teen range.

We’d still recommend this cruise for teens though, there are a million things to do on the ship (which can all be found in the daily Navigator provided, a program that lists all activities for that day) and there are definitely opportunities to meet other kids.