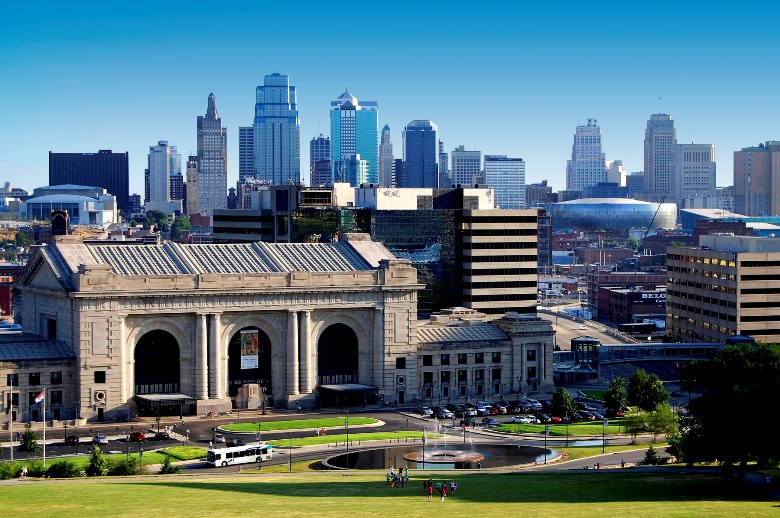 The kids don’t know what to do first.

Should they make a puzzle, cutting the pieces on the old-fashioned puzzle machine? Create art with melted crayons in the “glow in the dark” room, build a one-of-a-kind hat or a 3-D dinosaur or “publish” a book?

Kansas City is one place where they can do all of that and more — and it won’t cost parents a penny. That’s because Kansas City’s Kaleidoscope in Crown Center (www.hallmarkkaleidoscope.com) is totally free, thanks to Hallmark. Kids use art supplies and recycled materials — long rolls of shiny gold ribbon, every color of marker, colored paper that’s cut into hearts and circles and squares, curly ribbon, bright fabric, plastic tubs and cardboard tubes — to create their own art in a fanciful space. (Check out the family workshops!) Some 140,000 children visited Kaleidoscope last year.
“I love this place,” said Amy Schreifels, who was helping to chaperone her child’s first-grade class. She often brings her four kids, who range in age from six to 11, here. Each of them, she says, finds something they want to do. “It’s safe, it’s free and the kids don’t want to leave,” Schreifels says. While you’re in Crown Center, visit the Hallmark Visitor’s Center (www.hallmarkvisitorscenter.com) to see how greeting cards are made. You’ll also learn how the whole business got started by 18-year-old Joyce Clyde Hall selling postcards out of two shoeboxes at a local YMCA.

Many of us might recall that Hallmark is headquartered in this friendly Midwestern city. Most of us think of Kansas City, Mo., (www.visitkc.com) as a terrific place for barbecue. And it is. There are more than 100 Kansas City barbecue restaurants in all, but there is also plenty of jazz and a whole lot of fountains — the city has more than 200, more than any city in the world except for Rome. But what a lot of people don’t realize is how much families can do here.

This summer, when we’re all watching our vacation budgets so carefully, let’s remember there is a lot to see and do wherever you live — and those cities — large and small — want and need your business as much as far flung destinations. Take the time to explore your own city like a tourist and let the kids lead the way. Stop for a day or two at a smaller city nearby.

In Kansas City, for example, you can find a hotel room for less than $100 a night and the kids will love jumping through the famous fountains outside of Crown Center and just about every other public building here. You’ll love the award-winning children’s theater, The Coterie Theater (www.coterietheater.com), which offers a special Coterie At Night Series for teens.

Plenty of restaurants seem designed with kids in mind like Fritz’s Railroad Restaurant (http://www.kansastravel.org/kansascitykansas/ftitzrailroad.htm) where the burgers are delivered via “train track” that curves around the restaurant or Fiorella’s Jack Stack Barbecue (www.jackstackBBQ.com) — first opened in 1957 and now boasting an extensive menu, including everything from ribs and chicken to New Zealand rack of lamb, shrimp and steaks. Kids are bound to like the “Cheesy Corn Bake” and triple chocolate brownie. Parents will like the reasonable prices.

There’s the first-rate National World War I Museum (www.theworldwar.org), the only National World War I museum in the country, attracting scholars and historians from around the world. The museum displays many objects never before seen that tell the story of the Great War as told by those who fought it at home and in the trenches. Check out what soldiers had in their pockets, for example, (cards and Bibles). Kids will love the chance to create their own War Bonds poster — and then email it home.

Your hoops lovers won’t want to leave the College Basketball Experience (www.collegebasketballexperience.com). Here you’ll try to beat the clock in the highly stressful final moments of a game, take a stab at being a sportscaster or visit the National Collegiate Basketball Hall of Fame. Did you know Kansas City has hosted more Final Fours and more NCAA basketball games than any other city in the country?

I could have spent all day just at Kansas City’s Union Station (www.unionstation.org), which is so much more than a train station. Science City (www.nlbm.com), visit the home and library of President Harry Truman in nearby Independence (www.visitindependence.com). While you’re there visit the National Frontier Trails Museum and learn what it would have been like to be part of a 19th-century pioneer family. This museum tells the stories of those who headed West from Independence along the Santa Fe, Oregon and California Trails. Have your kids ever seen a real covered wagon? What would they insist they bring along on the trip?

Another plus to visiting a smaller city like Kansas City is that the pace is more relaxed. You’ll have plenty of time to browse the shops that spread out over 15 blocks at Country Club Plaza (www.countryclubplaza.com), which was actually the country’s first outdoor shopping center designed for cars. Hit a water park. Schlitterbahn Vacation Village Waterpark (www.schlitterbahn.com/KC) is scheduled to open this summer with one of the world’s biggest tubing parks. Ride a new wooden roller coaster at Worlds of Fun (www.worldsoffun.com). Go to the newly expanded Kansas City Zoo (www.kansascityzoo.org) and check out the Zoo Learning Center. Go to a Kansas City Royals game (www.royals.com) or to an outdoor concert or movie — at Crown Center there are free kid-friendly films shown outside on a big screen every Friday night.

Then pass the barbecue sauce, please.