Kayaking around the tip of Baja California 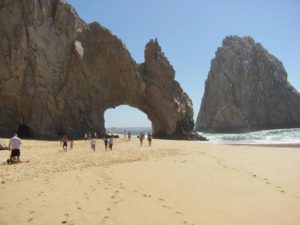 The arch at the tip of Cabo San Lucas

No it isn’t so named because of affectionate couples. Apparently Jacques Cousteau so named this spot in Cabo San Lucas after watching the Pacific swells pound the calmer Medano Bay on the other side. He said the Pacific was making love to the Sea of Cortez.

Our kayak guide Carlos Michaud tells us locals call the Pacific side beach Divorce Beach because it is so rough. We’ve kayaked from Cabo San Lucas to see the famous arch—the natural rock arch that is surrounded by towering rock walls. It is said this is where the Pacific meets the Sea of Cortez here on this peninsula but our guide tells us the true spot is probably two hours north of here.

Still, it is a beautiful iconic spot—all the more special because this is that rare time that currents have created a beach around the arch. We can actually walk under and around it—along with lots of others of course. Typically, we would have to be satisfied with seeing it from a boat.

Carlos, who leads tours for Terramar  laments that  too many visitors  to Los Cabos stay anchored at their resorts (look for deals this summer at Solmar’s  Playa Grande Resort and  just opened Grand Solmar Resort  with kitchens ) and don’t explore the natural beauty that  is all around them. Come in the winter, Carlos says, and you can literally reach out and touch a humpback whale. They come here to calve and play and jump just off shore. “They are used to people,” he says.

Come in late August and you can help put the newly hatched sea turtles back in the ocean. You can surf and kayak and snorkel and dive. We snorkel around  a rock where  pelicans are perched; a short distance away a colony of sea lions are basking in the sun. We see thousands of baby sardines, a giant grouper, Sergeant Major, Parrot Fish…I can’t name them all!  “You must be careful,” Carlos tells us. “The ocean is very aggressive.” Indeed, I have never kayaked in such wind—“and this is nothing!” Carlos says.

Even worse and perhaps because it is a Sunday, the area is teeming with water taxis—glass bottomed—that are bringing tourists and locals alike out to see the phenomenon of the arch beach. I can’t blame them. I just wish I’d had the place to myself.

Many are local families out for a fun Sunday by the ocean—little girls turning cartwheels in the sand; boys digging giant holes. Kids and parents alike race in and out of the water. “The people who live here  came here from other places because they were looking for something different in their lives,” says Carlos, a former industrial designer from Mexico City. That’s why, he believes, people are so friendly here.

And they are, smiling and saying hello. We end our day at a popular local Tacqueria Rossy in San Jose crowded with local families where we feast on shrimp and scallop tacos and taste a local dish called Aguachile—a kind of ceviche made with shrimp and red onions that is spicy and delicious. Did I mention the tacos were only about $2 each? Carlos tells us the place is always packed and it’s easy to see why.

He tells us all the things we don’t have time to do this trip to Cabo—scuba diving  farther north in Cabo Pulmo, , visiting waterfalls and thermal pools, surfing and fishing….

Next trip, we promise.

Next:  No apologies for having kids along