Kid Nirvana on the Disney Cruise 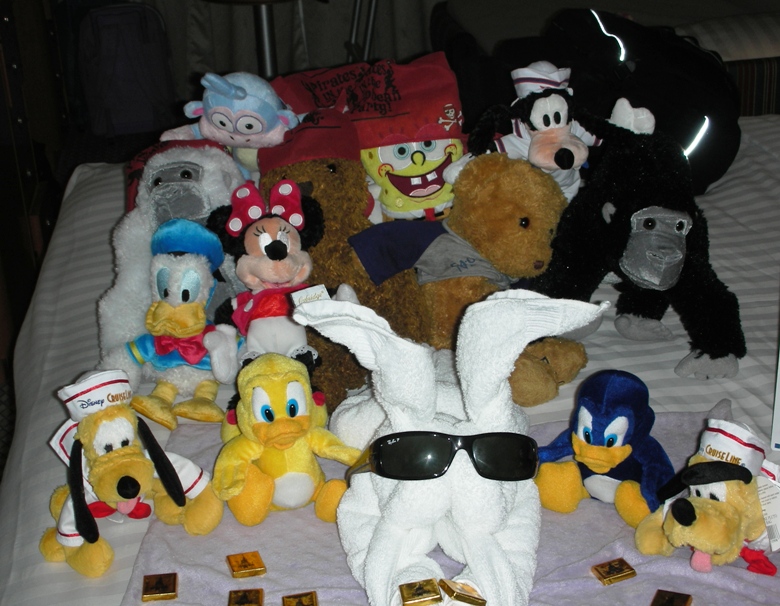 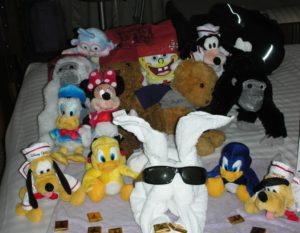 Towel animals on the Disney Cruise

DAY FIVE — These little kids must be dreaming.

It’s well past their bedtime but they’re not in bed. Instead, they’re dressed to the nines (the girls anyway, in princess get-up, complete with sparkly shoes and Minnie Mouse dresses) waiting in line to get Cinderella and Jack Sparrow’s autograph. They’re at the Oceaneer lab climbing up to the top of the “pirate” ship so they can slide down.

They’re on computers playing the latest video games. They’re sitting in “clam” shells watching Finding Nemo. They’re in the theater mesmerized by a first-rate live show complete with you guessed it — Mickey and Minnie. The waiters at dinner know their names and they could get anything they wanted on the menu without promising to finish every last bite of that expensive dish (a side of salmon with my chicken fingers please!)

Did I mention when they finally get back to their room, their always-smiling stewards have left animals shaped out of towels. For my cousins, five year old Ethan Sitzman and his three year old sister Hannah, there was a towel elephant surrounded by their stuffed animals. “They were having a party,” Ethan said.
It’s all the Disney difference, says youth activities manager Shannon Quinn ll. That means that all of the 50+ youth staff on this ship have college degrees as well as two years experience working with kids. They talk at least eight languages “and if we don’t speak it, we’ll find someone on the staff who can help,” Shannon says.

My little cousins certainly think they’ve reached vacation heaven. They and their parents are, like many on this ship, first time cruisers. It is, after all, a three-night cruise, ideal for those who want to see if cruising is right for their family.

On this ship, there are 1,034 kids — nearly 700 under seven years-old, including more than 100 babies and toddlers being cared for (at an extra charge) in the well-equipped Toddler’s Nursery. Consider that there are 1,653 adults and another 981 crew (from 55 countries) That means that nearly half the passengers are children.

There are different areas for the different aged kids better equipped than many schools … computers dress up (want to be a pirate or a princess?), books, games, toys and, most important, the most energetic staff I’ve ever seen. But what if a young child has separation issues? Before paging the parent (every family is given a pager so they can be quickly reached) the staff will do all they can to engage the kids and, Quinn says. Most of the time it works.
No worries about sanitation here. Not only is everything cleaned at night but “We clean all the time,” Quinn says. “Because of maritime law we’re even stricter than a day care center.”

Like Disney World, there is so much to do it’s impossible to do it all. Do you want to make kites, watch a new Disney movie, shoot some hoops, play pirate trivia, splash in the pool that’s shaped like Mickey Mouse’s head, play ping pong?

This ship isn’t only about the kids, though. There is an entire deck designated for parents as well as an adult pool and spa. That’s why the children’s programming runs until midnight. They’ll feed the kids lunch and dinner too. There are plenty of adult activities to (martini tasting or Pilates anyone? Maybe this is vacation nirvana for parents of young kids too…are they dreaming too?