Kids can have fun on a grown-up cruise 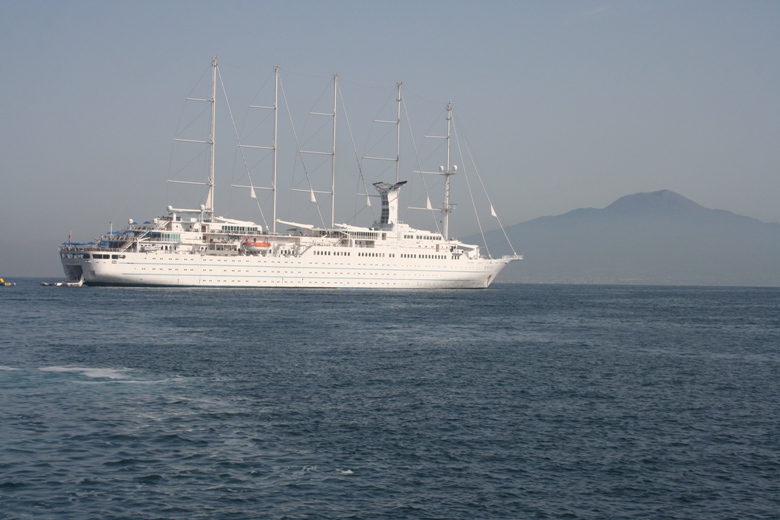 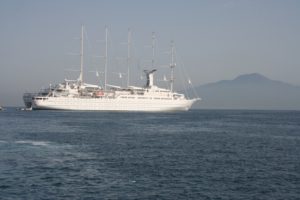 I would assume the 240-plus adults on board the Wind Surf being attended by 187 crew would agree on this spectacularly sunny sea day last year. They are reading on deck, playing scrabble and cards, indulging in a leisurely lunch (everything from gyros to Greek beef salad, cold cuts, chilled cranberry soup, Asian fish curry… the list goes on and on.

We have left the Adriatic and are cruising in the Med now, making our way to Messina, Sicily. This is our only day at sea and I wish we had another it is so wonderful!

Sophie is on board with her brother, sister, cousin her mom and grandparents. Her grandfather, Al Palazzo, also a southern Californian, wanted to show his grandchildren some of Italy’s Great Sites and thought this would be an easy way to do it, especially since his wife Tyne has difficulty walking.

He’s cruised with Windstar many times and felt more comfortable here than tackling a ship he wasn’t familiar with. You wouldn’t think Windstar would be for kids—and there are just a handful on board—but they’re finding plenty to amuse themselves from the DVD library, the virgin drinks, to the water platform where they can jump on the trampoline in the water, kayak and swim when the ship is in some of our ports. “That’s been the best,” said 11 year old Josh Bonin. “That and all of the free food!” that his grandfather is paying for of course.

Al Palazzo is a bit disappointed that the kids are more interested in shopping and gondola rides than Great Sites but he’s glad everyone is having a good time and more importantly, he’s not navigating the family and all their bags from city to city. “I wanted the trip to be as laid back and stress free as possible and this was my best idea,” he said.

That’s true for the grownups too. The ship takes us from port to port and we simply relax on our way there. The staff is attentive without being obsequious. “I much prefer this,” said Toni Reston, also a California, who recalled the crowds when she sailed on a larger ship with her daughter when she was small.

Here there is no lining up for anything–not the buffet, not asking a question, not getting off the boat. There’s no set time for meals though the two small on-deck restaurants–Candles and Le Marche–require advance reservations.

“This is so refreshing,” another guest told me. “I’m sold on smaller boats now.”

Earlier, Chef Ronald Waasdorp had led us in a cooking lesson to make crab cakes which the 10 or so guests-–including my husband thoroughly enjoyed.  Dressed in chef’s hats and jackets, they sautéed the celery, onions and red pepper, mixed the crab with egg, mayonnaise and spices (it helped that everything was laid out in the correct portions) and then cooked the cakes till they were perfectly brown.

The chef told us by next spring, there should be a new demonstration kitchen so that more cooking lessons can be offered. After we’d polished them off with a glass of wine, he led us on a tour of the galleys—surprisingly compact, we thought, where food is prepared for the crew as well as the guests and everything, he said, is as fresh as possible. “No food is recycled after it has been served,” he said.

By today, we’ve gotten to chat with many guests, talked politics (Can you explain the Tea Party a couple from Britain had asked).  We’ve met people from across the United States and as far as Australia and Brazil. Because the ship is small, it is conducive to simply joining another couple for breakfast or lunch or even dinner if we like. Last night, though we had a table for two, we spent the entire meal chatting with the couple at the adjacent table.

Even the crew knows our names. “How do they do that,” says one admiring guest.

Maybe this ship isn’t for everyone—there’s no formal night, no non-stop activities, no band leading games by the pool. But it is mellow and relaxing—just what those on board seemed to want.

Even 13 year old Sophie Bonin.  Though there are few kids on board and no organized activities or teen club, she’d definitely recommend this trip for teens. “I like being treated like a grownup,” she said, sipping her Colada.