Kids have a different take on cultural exchanges on cruises 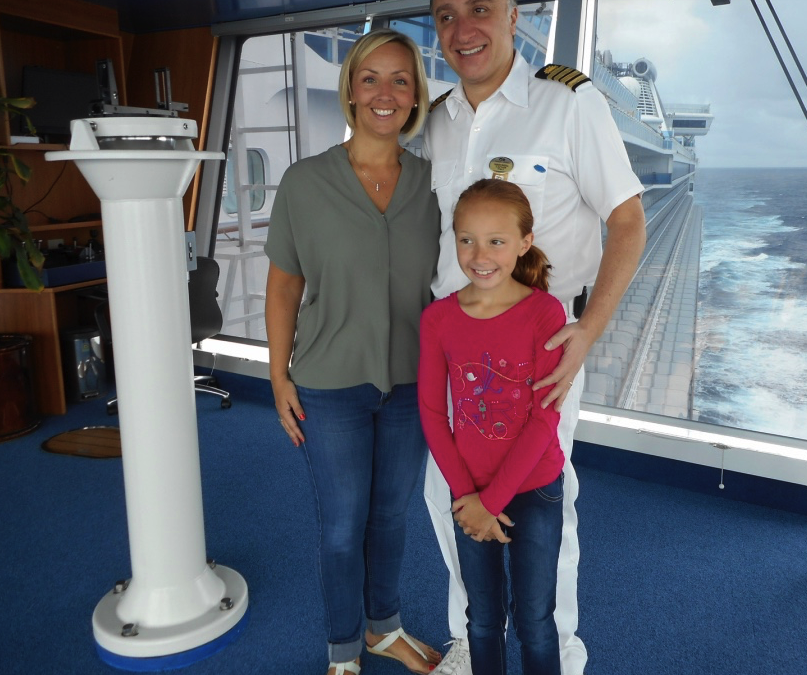 AT SEA ABOARD THE DIAMOND PRINCESS OFF THE COAST OF JAPAN — Jessica Maraesca at age eight is already a bonafide cruise expert.

But she has one big advantage—her dad Fabrizio Maresca is the Captain of the Diamond Princess, commanding a crew of 1,050 and celebrating his 15th anniversary with Princess Cruise Line. In fact, Jessica wouldn’t be here if not for Princess—her mom and dad met working on board. Her mom, Caroline Andrews, was a dancer.

Now, she and Jessica sail whenever Jessica is on school holidays. That the kids on board come from around the world and don’t always speak English or Italian—Jessica’s two languages—is never an issue. “It’s amazing how they communicate,” Caroline said.

“We use a kind of sign language,” explained Elizabeth Williams, 13, who is from London and made fast friends with Yuka Iwasa, who is Japanese, as well as Vivien Trinh, 14, from Toronto and Quinlin Wilson McPhee, 14, a fellow Canadian.

“You meet a lot of different people from different parts of the world and you spend a crazy time with them all,” said Elizabeth.

“The older kids teach each other language,” said Justine Pastor, the youth programs manager on board and a 10-year Princess veteran. This cruise only had 134 kids and at most 300-400 on this itinerary ,m as compared to Alaska or the Caribbean where there can be twice as many—with added staff, of course. Language is never a barrier for the kids and the youth staff come from around the world. “At the end of the day, they all play together,” she said. “The kids help us translate!”

On port days, younger kids stay with the youth staff rather than tour with their parents, she said.

Listen up parents — if you thought the educational part of cruising was only seeing historic and cultural sites, you were wrong. It seems much more cultural exchange happens right on board at the kids’ and teen club, kids say. “Every thing is unexpected,” offered Quinlin McPhee.

“We’d much rather be on the ship than touring,” said Vivian Tranh. “The days we can spend together are the most fun.” Go to the youth club the first day, she suggests to kids and teens who are newcomers to cruising. “That’s the best place to meet people,” agreed Elizabeth Williams.

What did they learn about Japan? “The sushi is different—much fresher!” said Vivien Tranh.

Quinlin McPhee said she’d always been fascinated by Japan and when she saw an ad for this cruise, she persuaded her parents to come and added she’s learned a lot here.

There’s a lot for kids to learn, says Heather Hopkins Clement, the onboard port expert who is developing an app for cruise passengers in Japan who opt to explore independently (only about a third of the passengers on board opt for organized excursions on this itinerary).

Japan is one of the safest countries in the world, she notes, and while hardly anyone speaks English, “The Japanese will walk 15 minutes out of their way to help you get where you are going. That won’t happen most other places.”

Just make sure you have a plan because, she adds, taxis are expensive and not as easy to come by in Japanese ports as elsewhere. Still, “Japanese people are so helpful, you couldn’t pick a better place to get lost,” she jokes, adding that all travelers know some of the best memories are the result of missteps. You can arrange, in fact, a free Good Will Guide to meet you in port—a local volunteer who speaks English and will guide you.

Japan is that rare combination of a commitment to tradition and the cutting edge of technology and entertainment. Are you ready for the Anime museum in Kyoto? Or the Noodle Museum in Yokahama—recommended by young Jessica Fabrizio.

“Kids and adults see in Japan that there is more than one way to do things and one way isn’t good or bad—just different—and that’s what makes life interesting. You will never look at the world the same way again,” said Heather Clement.

Josh Berkowitz, 13, says he won’t forget this trip after sailing here with his grandmother from the Philadelphia suburbs. “I really like Japan a lot,” said Berkowitz. “I like the culture and how polite everyone is. I’m going to learn to be more polite when I get home“

His favorite excursion—to a Sumo Wrestling Museum. “I’m going to miss the friends I made, the crew and Japan. I’m going to come back,” he said.