Kids learn about sailing in the Earth’s most difficult waters 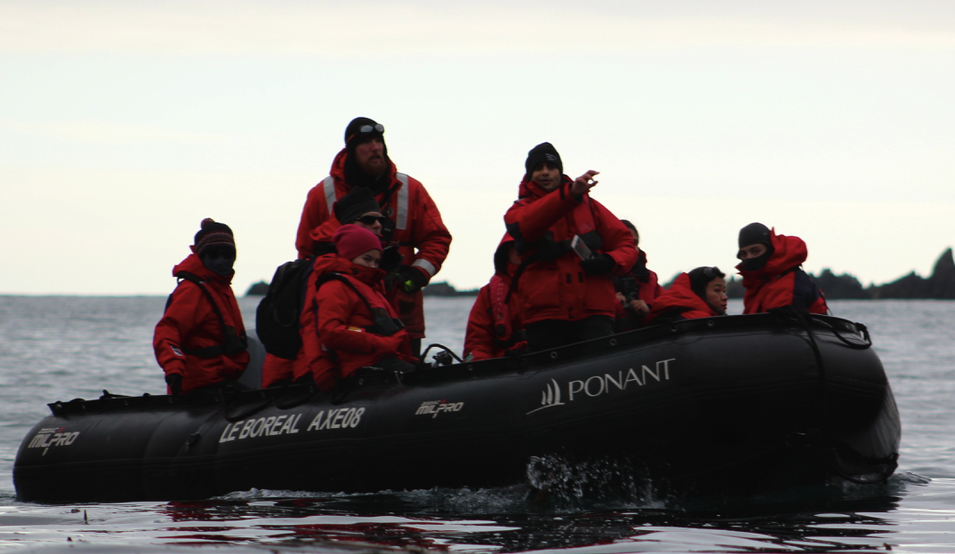 ABOARD LE BOREAL SAILING THE SCOTIA SEA TOWARDS ANTARCTICA (DAY 8) —

The boys are enthralled—what looks like the biggest video game they’ve ever seen is laid out in front of them.

But it’s no game on this Abercrombie & Kent expedition to Antarctica.

We’re in some of the most treacherous seas of the world, Captain Etienne Garcia, tells the boys and girls. He explains how the sophisticated equipment—sonar, radar, four engines, stabilizers, desalination equipment for making fresh water, equipment to compact trash, enough fuel to last a month — enables him and his crew to “truly navigate the most difficult part of the world,” he tells the group of some two dozen kids.

These waters have it all – wind, fog, ice, water two miles deep and conditions that can shift in an instant.

The ship, with room for 200 passengers and carrying 145 crew, is reinforced to handle the icy conditions — an ice class ship — but can’t break the ice.

That said, he continues, “You have to realize what a gift it is for you to be here. You are very lucky. South Georgia is the most impressive place in the world to see wildlife.”

The kids got that message yesterday. “I loved sitting down and relaxing on the beach with the elephant seals,” said Thomas, 12, from Melbourne, Australia.

“My favorite was watching the king penguins… they have so much curiosity,” said Colin, 14.

Others in the group opined that they especially liked the zodiac rides in the afternoon—a dozen people per zodiac—where they could get a close up view of a Macaroni Penguin colony.

After a week aboard, they didn’t think it was odd at all to be talking about “relaxing “with the huge, lumbering elephant seals or to come within inches of those curious penguins and seal pups.

Earlier, Kim Chater, the whale expert on board—there are experts on glaciers, birds, Antarctic history, even making music with harmonicas—who give lectures to the adults and some special presentations to the kids—had announced fin whales were in the vicinity of the boat.

Passengers, including the kids, bundled in their jackets and hats and rushed up on deck to be greeted with the sight of majestic 80’ long whales—as many as 30 around the boat, Chater said, “hanging out to feed.”

The Captain explains the years of study it takes to learn to be a captain or chief engineer and notes he also spent a lot of time professionally racing sailboats.

“It’s nice to see the kids so interested,” he says afterward.