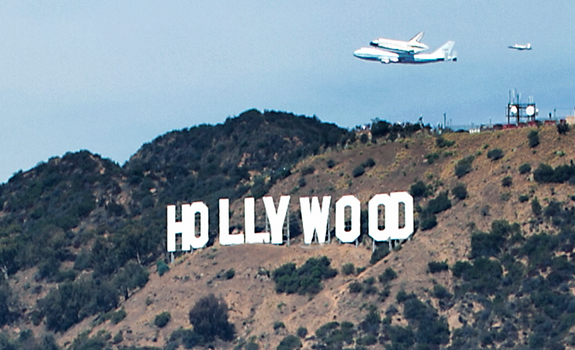 Touch the tires that flew in space or figure out how to use a space potty (kind of complicated).

But the real wow factor is just staring up at the huge Space Shuttle Endeavour at the California Science Center in Los Angeles.

The Endeavour was built in southern California as a replacement for the doomed Challenger, which exploded in 1986.  It was assembled in Southern California and part of the exhibit is the control room—down to the coffee mugs—from which engineers monitored the lift-offs.

Already, the California Science Center drew more visitors than any other museum in southern California—including 370,000 school kids.  But since the Shuttle has opened, the museum officials are projecting visitation will be up nearly a million to 2.5 million, says Science Center VP William Harris.

For the first time, he said, the museum is being asked for brochures and maps in other languages.  And that is spilling over to the other museums in Exposition Park—the LA County Museum of Natural History with its famous dinosaurs and the California Museum of African Americans.

But the big attraction right now is the gargantuan space shuttle housed in a temporary building after a spell binding journey over California (the photographs of the space shuttle flying over the Golden Gate Bridge and the Santa Monica Pier and downtown LA are amazing) and the 68 hours it took the shuttle to reach the museum from LAX drew hundreds of thousands into the street.

One teacher wrote how some of her inner city students were drawn to tears.  Four of them now have been offered a scholarship to Space Camp in Huntsville, AL this summer and they were inspired to do projects that now are on display in the museum.  “For us this shows the power of inspiring people,” says William Harris. “When you are inspired and excited, that’s when you learn.”

All around us are gaggles of school kids who are awed by the sheer size of the shuttle.  Every day, they are invited to post their thoughts after viewing the exhibit,  “The first time I saw it my eye popped,” a girl named Ashley wrote.

“I will tell my children and grandchildren about the time I saw the Endeavour,” said Chloe.

The Science Center, of course, is a lot more than the Endeavour. There is an Ecosystems exhibit that uses live plants and animals to explore the environment,  the SKETCH Foundation Gallery Air and Space Exhibits presents real aerospace artifacts (the kids love the space suits and the funny bracelet one California astronaut brought into space-the idea being that astronauts always bring something from their loved ones that they will bring back to them. There’s an earthquake simulator, a High-Wire Bicycle where you can pedal across an inch wire 43 feet above the ground.  There’s an IMAX and a big KELP Forest and aquarium with 1000 fish.  Kids love the Rot Room where they learn how decomposing animals and plants nurture life.  Gross!

In five years, a new home will be built for the Endeavor that will offer even better views inside and out.  Meanwhile, just looking at it above us is wonderful.  It is the only space shuttle on display outside the east coast (the others are at the Intrepid in New York, the Smithsonian in Washington and the Kennedy Space Center in Florida.

Though LA has terrific museums, tourists tend to spend their time at theme parks and beaches.  The Endeavour is changing that.  Just in the four months since the Endeavour was unveiled here—after a 68 hour trek across LA that drew hundreds of thousands of cheering Angelinos to the street—some million visitors have come here.

They ogle the moon rock, touch the tires that flew in space and look overhead at the famous tiles.  Museum staffers are stationed to talk about gravity, life in space and there is even discussion of tortillas—the astronauts discovered they were terrific space food because there weren’t any crumbs to float around in a gravity-free environment. Though the museum is free, for $5 you can enter a simulator and see what it feels like to blast off into space.

It took museum officials 18 months to figure out how to get the gargantuan shuttle through LA’s streets.  The tail section is five stories tall!  A million and a half people lined the streets.  There are interactives in this exhibit as well as throughout the Science Center.  Did you know this space shuttle flew in space 25 times?  Did you know each of the heat-resistant tiles on the underbelly is unique with each one noting which beach the sand came from to create them. Kids can stop at a computer kiosk and see what it looks like inside the shuttle on the crew deck   This being Earthquake-prone LA, the shuttle is anchored by two huge base isolators that will protect the shuttle even if the earth moves two feet—the same structural technology used in downtown LA buildings.

“The way we learn is to be able to do things and to figure it out—and this helps get kids excited by science,” says Harris watching the school kids push buttons, pull levers and work computers kiosks. “The goal is for kids to leave here thinking science is fun.   And relate it to their everyday life“

That includes the exhibit that shows us how much plastic we throw away –the average Californian throws away 55 pounds of plastic and 150 pounds of paper a year.  That’s a lot when you see it in a tower in front of you!

And then there is the inner city child named Richard Hercules who cried when it flew over his school because he has always dreamed of being an astronaut.

He will take the first step this summer at Space Camp.