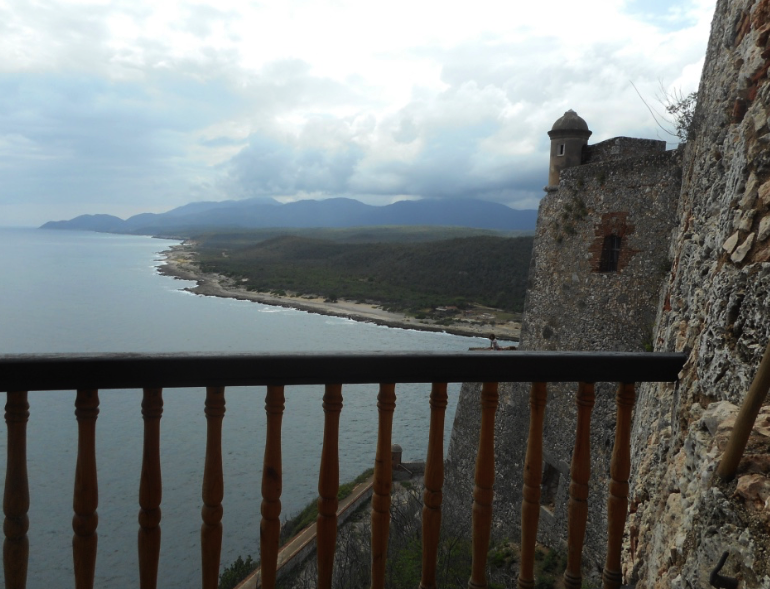 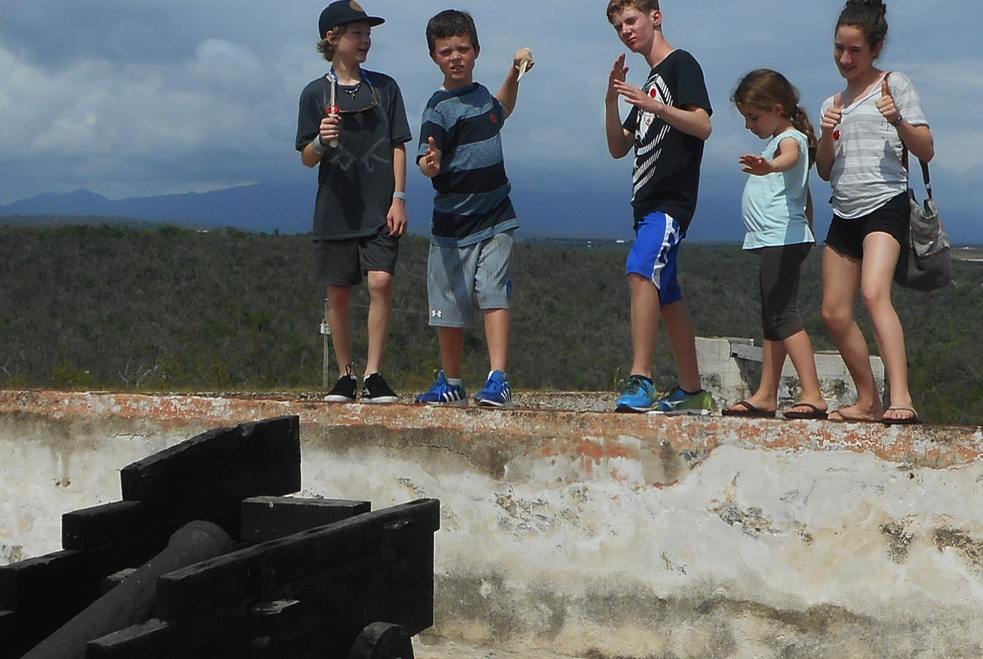 The huge and well preserved coastal fortress built in 1637 to protect the city from pirates, though no pirates ever attacked. There is even a Queen’s balcony built for Spain’s Queen Elizabeth who famously loved beautiful views but, alas, never visited here.

It is our last port call in Cuba aboard the inaugural cruise to Cuba aboard Fathom Adonia, the first American cruise ship to sail into Cuba in nearly 60 years, and there is no better place to end our visit than in this big city that is so historic .

It was from a nondescript balcony in the city center across the square from the Cathedral on January 1, 1959 that Fidel Castro appeared publically to declare the success of his revolution. It was also here that the Fidel and Raul Castro were briefly imprisoned (and many of their compatriots summarily executed by the Batista regime) during a failed first revolution in the early 1950s and where they launched the first battles of the successful revolution in 1956. 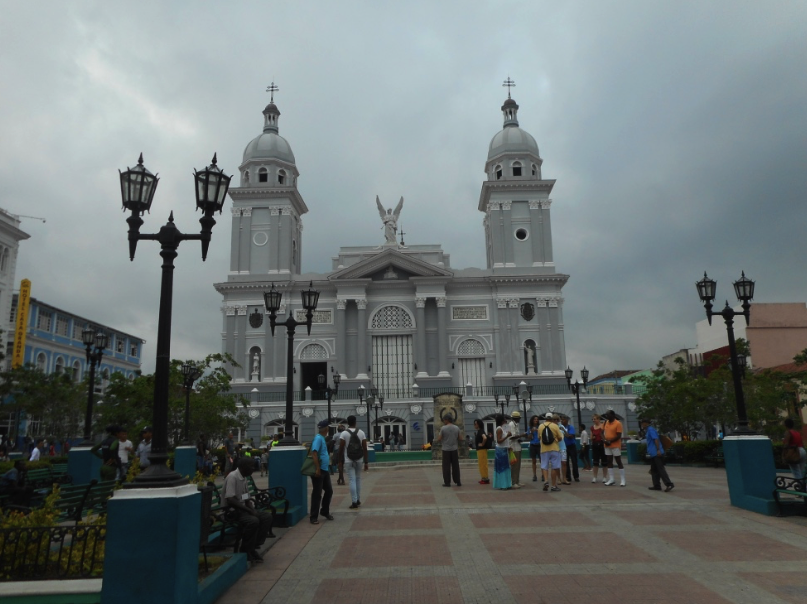 Not many Americans visit this city of more than a million people, despite it’s tremendous historic significance. Cuban national hero Jose Marti is buried here at the Santa Ifigenia Cemetery and some say Fidel Castro has indicated he wants to be buried near Marti. This city is difficult to reach either by flight or an uncomfortable 18-hour drive from Havana. The ship has made visiting easily accessible for Americans for the first time. “It is a great pleasure to welcome Americans,” said our tour guide Hayder Vidal. “Everyone in the city was excited.” 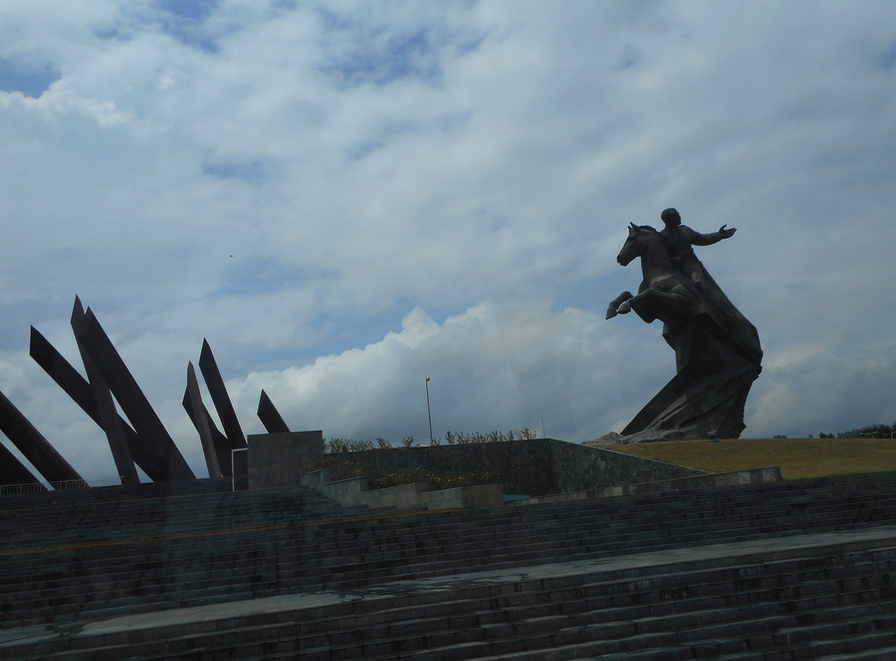 “I’m going to go home and tell my friends that Cuba is amazing,” said Katherine Wachtell, 11, here with her parents from Boise, Idaho. “It’s so different from America.”

Her dad Peter, meanwhile, feels like the trip is helping Katherine, the youngest of four children, begin to understand the differences in economic and political systems, “It’s all percolating,” he said.

For example, as our tour group is required by the U.S. government to engage in a people-to-people program, we were treated to a concert by the city’s 26-member Coro Madrigalista—the first choir in Cuba established in 1955. It is considered a full time job to sing in this group of trained musicians—they practice daily and sing concerts at least weekly. Members range in age from 18-40; some also are music teachers and professors. Yet most of them earn the equivalent of less than $200 a month. 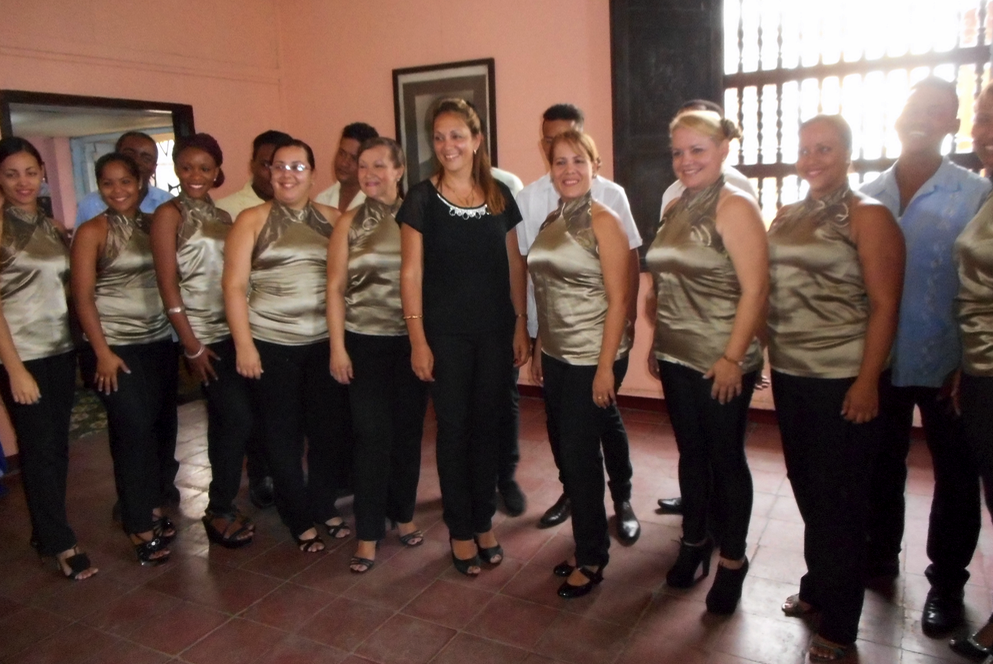 The kids were pondering that as compared to the $10-$15 they were spending daily on souvenirs—bongo drums, wooden cars, tee shirts, bead necklaces and bracelets. They were also considering that even though Havana is so close to the United States, getting a visa for a Cuban to visit the US is difficult and costs nearly as much as many Cubans earn in a month. We pass by a store where Cubans use their ration coupons to buy staples such as sugar and rice—never enough for their needs.

For the Cuban Americans on board, experiencing the island and the challenges it faces was even more poignant. Darin Klahr, a free lance writer from Tampa was traveling with his dad. When they booked the trip, they weren’t sure his Cuban-born mom Lina could come—permission for Cuban born Americans to sail into Cuba was granted just days before the trip.

The two came armed with photos on their phone of pictures of Lina Klahr as a child—on her tricycle, at Jewish religious school, where she had lived before she left for New York at age 16. Through friends in Miami, they had arranged to meet someone in Havana who took them around, including to what was once the optical shop where Lina Klahr’s father worked and where he met her mom—both of them immigrants from Europe before World War II.

“Cuba is a place I’ve grown up hearing about, but a country we couldn’t visit. \It was bittersweet to see it,” Klahr said. Hopefully, his mom will see it soon.”