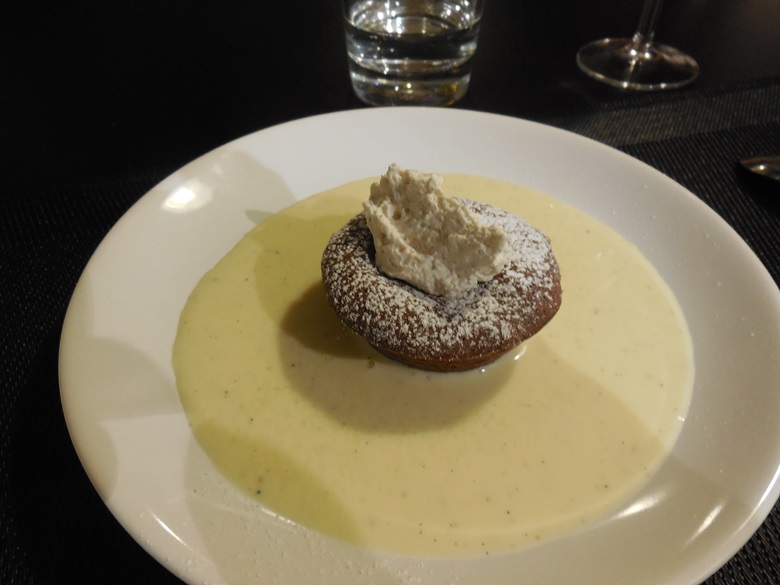 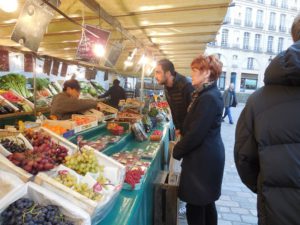 We’re seven strangers ranging from 22 to 60-something standing in a Paris afternoon outdoor market trying to decide.

“I’ve only done rabbit once,” laughs Chef Eric Monteleon, who is leading our motley crew.

We’ve signed on for a cooking class with La Cuisine Paris, one of just a handful here that offers classes in English.  There are popular classes in learning to bake the famous French macarons, croissants baguettes and even more complex ones on how to debone a chicken.  At the holidays, there are classes in making the classic French Buche Noele.

The school is the brainchild of former Chicagoan and banker Jane Bertch and her partner Olivier Pugliesi.  While the minimum age for the group classes is 13, Bertch says a growing number of families sign up for a private class  starting at $370 Euros.  There even have been Make a Wish kids here—those suffering from a life threatening illness who only wanted to learn to cook in Paris. 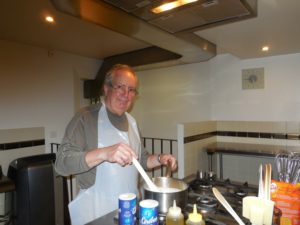 Andy stirs the sauce for the chocolate cake dessert

“We get all levels of cooks,” she says at the school, around the corner from Paris’ famous Hotel de Ville, city hall, and a short walk from Notre Dame.  “We have professionals who recognize they can learn. This is about the experience.  It should be fun, not intimidating.”

We’re joined by a young couple in their 20s, Annalisse Gauci and Lloyd Burbage from  Australia.  Gauci says she’s obsessed with food and is taking the opportunity to take classes both in Paris and Rome. Burbage, for his part, said he just wanted to glean some tips to improve his cooking

Simon and Karen Brock, also Australians and celebrating Simon’s 50th birthday on a trip without their three sons,  explained they’d visited Paris Before, had seen most of the major sites and wanted to see if they could spice up their every day cooking.

Cathy Hendrickson, a CPA from Gainesville FL has taken classes here before and is a dedicated foodie—even taking the metro 40 minutes in Paris to buy a baguette from the baker whose loaves have won top prizes this year.

So here we are shortly after 4 p.m. at this open air market.   Bertch says even taking kids to a Paris market—there are 90 open air markets in the city—can encourage them to try new foods—whether a different colored carrot or a kind of cheese they’ve never seen or a slice of pate.  Kids, she says, often challenge each other. 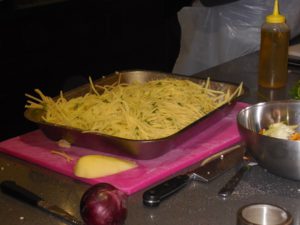 We’re challenged by the daunting task to choose a menu, shop, cook and serve and eat the meal in a little more than four hours.

A few in our group suggest duck breast.  Chef Eric thinks that will work with a shallot, wine vinegar and honey sauce, accompanied by roasted  vegetables and a kind of potato pancake made with very thinly slices of potato.

Now we’re on a roll.  For the starter, we decide on pumpkin soup.  Of course there will be a cheese course.  Did you know there are 400 kinds of cheese in France?

For desert, “Something chocolate!” we all agree—mini=molten chocolate cakes in a vanilla sauce.

We’re thinking this is ambitious, but we follow Chef Eric as he buys the vegetables—carrots, leeks, butternut squash  and girelle mushrooms for the soup; onions, cauliflower—at one place, varieties of cheese—bleu, ash-covered goat and a hard cheese.  When selecting cheese in France, he says, it’s important to get cheeses made from the milk of different animals—goat, cow and sheep and those that are soft and hard.  They all look good to me!

We go to a boucherie –butcher—to buy our duck breasts and and a boulangerie to get our baguettes. This wouldn’t be a French meal without lots of fresh bread.  Feeling very Parisian, carrying our baguettes and food in baskets, we head back to start cooking.  “You must take five minutes to read the recipes,” Chef Eric tells us.

We start with desert because, Chef Eric explains, we start with what takes longest.  We crack eggs, melt chocolate and butter, and strip the vanilla bean –if it doesn’t bend, it isn’t good, he tells us– so it will infuse the cream sauce which we stir and stir until it thickens.  When the chocolate cakes—they are supposed to be runny in the inside—go in the oven we start on the soup. 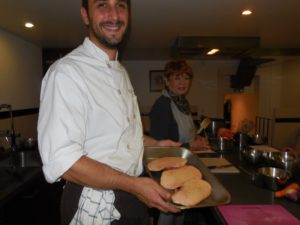 The duck breasts are ready for the oven

We get a lesson in properly holding a knife and dicing an onion.  Even an experienced cook like me learns something here as do the others in the group, they say.

So easy! Simply sautee garlic and onions, a pinch of fresh thyme.  Add the squash, some already cooked chestnuts and water or broth to cover and let it simmer.

At home, that with some bread and cheese would be dinner, but here our work is just beginning.  We must slice the veggies to roast—cauliflower, leeks, turnips and more, “massaging” them with our hands and a little salt and pepper.

Meanwhile, we’ve learned how to prepare the duck breasts, trimming the fat but leaving plenty because we’ll be using it in the potatoes. No one is thinking about clogged arteries or calories tonight!

The kitchen is a whirlwind of activity — chopping, stirring, whisking.  That sauce for the duck?  tarts with a bit of duck fat, chopped onions and a dash of red wine vinegar, nutmeg, ginger and honey…Yum!

The potatoes? We add chervil, salt, pepper and garlic. “Where’s that garlic?” the chef demands.  He shows us how to form and then flip the pan-sized potato pancakes.  He makes it look easy!

Meanwhile, the soup must be pureed in the blender, the mushrooms sautéed for the garnish and cream whipped for the top of the soup.  The idea is you can use the cream to make a decoration but we inexpert cooks whip it a little too much.  This is a class, after all.  We just laugh… even though they haven’t started pouring the wine yet. 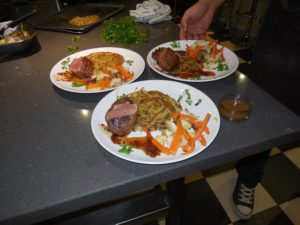 We must prepare the vinaigrette that will be served with the salad that we’ll have after the main course, as is European style and that’s easy—2 teaspoons of Dijon mustard, 2 tablespoons of Balsamic Vinegar and 6 tablespoons of olive oil.

Chef Eric makes us feel better when he tells us that classics like béarnaise sauce and puff pastry were actually mistakes that restaurant customers liked. d

We plate the soup, adding the too-whipped cream and chervil and mushrooms.  It looks amazing.  “Delicious,” declares Kathy Hendrickson, who jokes the soup is the first vegetable she’s eaten since arriving in France.  We’re all actually surprised at how delicious it is—and how good it looks.

The main course is even prettier—a equally tasty—a generous serving of the duck breast served atop the potato pancake and alongside the roasted fall vegetables. The sweet and tart honey onion balsamic sauce is just right.

As we serve ourselves the cheese and salad drizzled with our vinaigrette, everyone talks about what they’ve learned.  Surprisingly, it’s the basics …how to crack an egg without getting shells in the bowl, how to chop an onion or even hold a knife properly.  “All the basics you thought you knew,” said Annalisse Gauci. 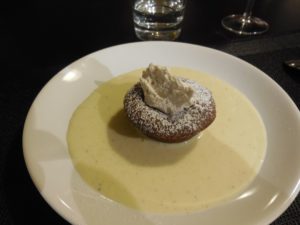 “You really did fantastically well,” Chef Eric says as we toast our achievements and dig into our chocolate cake with crème anglaise sauce.  Yum!

“Our goal is to teach something,” says Chef Eric “It is about community, making good food, simply done and having a good laugh…that is the best.”

Absolutely, we agree as we end our last of 13 days in France, vowing to apply our new cooking skills when we get home.