Last day in Switzerland – A ‘Sweet Tour’ of Zurich 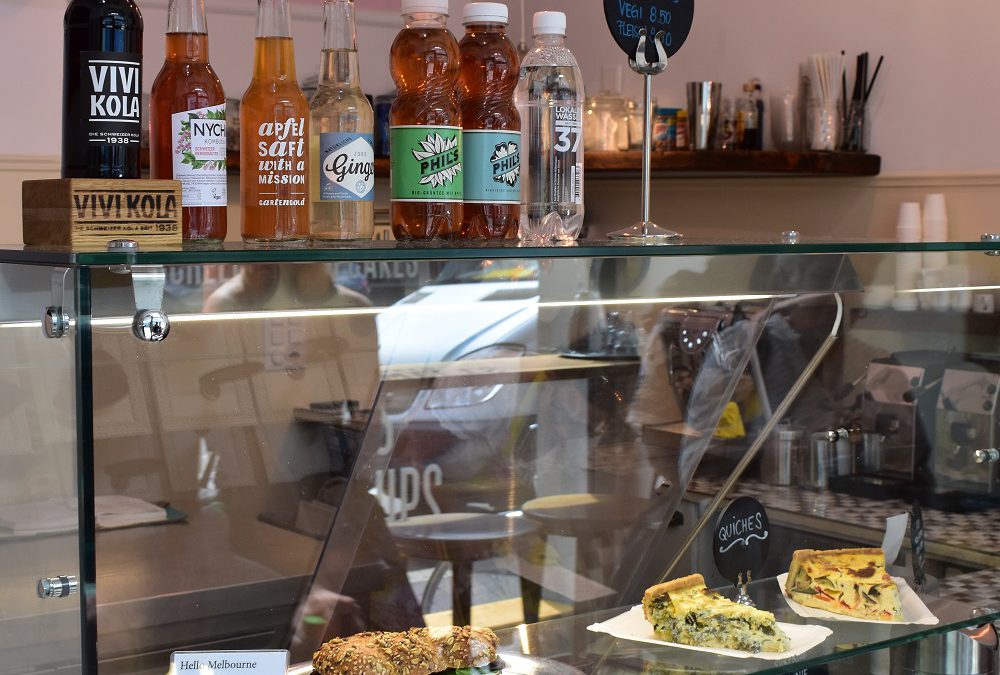 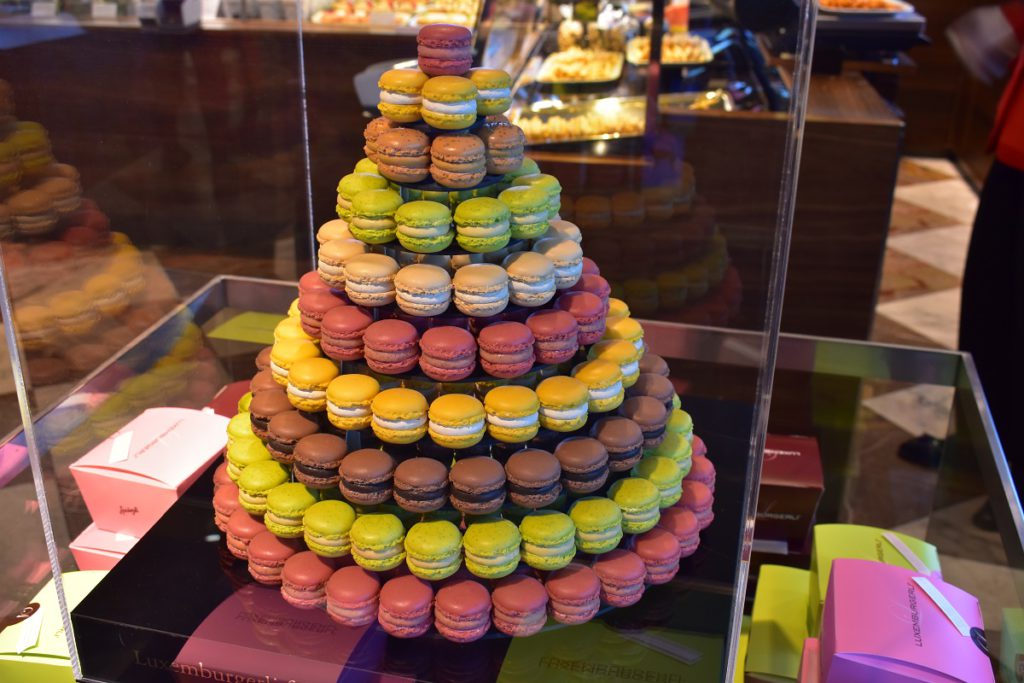 Luxemburgerli – little macrons made at Sprungli in Zurich

There is no right or wrong.

Not when it comes to chocolate anyway, says our Sweet Zurich tour guide Christina Fryer, an English woman who has been living in Zurich for the past 11 years and is herself a travel blogger (www.newinzurich.com).

“It’s all about what you like,” she explains as she shepherds us from a famous Swiss chocolate emporium Sprungli, known for many flavors of macrons (called “Luxemburgerli”) that are smaller than French ones and less flat and come in delectable flavors from bourbon vanilla to pistachio, raspberry and of course chocolate.

These were invented some 60 years ago, Fryer said, to distinguish Sprungli from the growing competition in the chocolate industry. Today, locals as well as tourists flock to the Sprungli stores for these as well as their chocolates–my daughter used our last Swiss francs to buy a box at the airport to take home, in fact. She wasn’t the only one.

How did such a small country—there are only about 8 million people in all of Switzerland, fewer than in New York or London—become so famous for chocolate?

Marketing and quality, Fryer says, pointing to the beautiful boxes and tins adorned with ribbons. “Chocolate is an everyday luxury,” she explains, one that is given as an expression of love, of gratitude or “just because.” But the Swiss appreciate quality of fine chocolate. They prefer one delicious piece–a truffle, a square with hazelnut or  filled with liquor to eating a whole bar. Perhaps that’s why we didn’t see many overweight Swiss our entire trip? 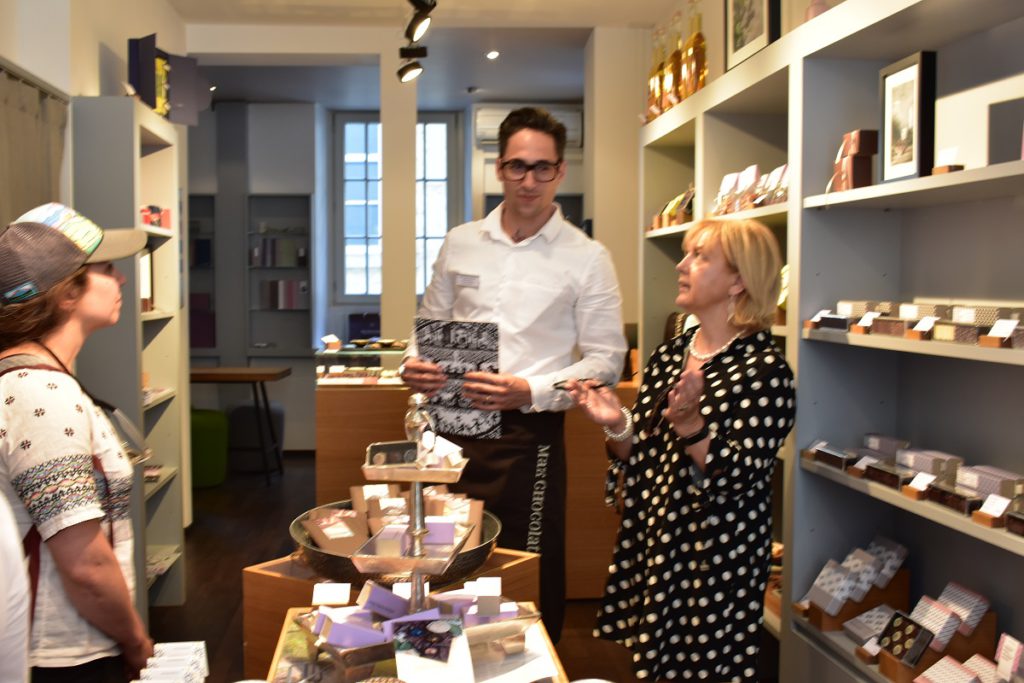 It is interesting to consider that the Swiss have become so known for a product whose ingredients—cocoa and sugar—came from abroad. But pioneers in the chocolate industry devised how to make a better product. By 1826, Philippe Suchard already had set up as a chocolate producer; Charles-Amedee Kohler worked hard to make his chocolate better—becoming famous for adding hazelnuts. Daniel Peter, who married the eldest daughter of chocolate producer F.L. Cailler, devised one of the great changes—using milk in chocolate by 1875. A few years later Rodolphe Lindt  improved the taste by producing “fondant” chocolate, especially popular with wealthy tourists and girls attending finishing school in Switzerland.

Perhaps the most famous Swiss chocolate came a few years later when Jean Tobler and his sons developed Toblerone, made from milk chocolate with honey and almond nougat.  And we can’t forget Henri Nestle, who in the early years of the 20th Century developed a special sweet milk chocolate.

Between the 1890s and 1910–the number of people working in the chocolate industry increased 100 fold—from less than 530 to more than 5500. This was during the great age of Swiss tourism and the interest in mountain climbing.  Some 40,000 tons of chocolate was being created by 1918, much of it exported. Since 1950, the industry has continued to grow—more than 130,000 annually tons created in this tiny country today with new innovations all the time.

Fryer takes us to Dieter Meier’s tiny shop–he is a famous Swiss/German celebrity and musician who has devised a new way to produce chocolate that has no sugar—and no bitterness. His milk chocolate tastes like the dark chocolate we are used to; his white chocolate is appealingly sweet without the cloying sweetness we expect from white chocolate.

Patrik Konig, a banker and watchmaker, aimed to produce handmade truffles with the highest quality ingredients from around the world named to honor his son Max, born with an extra chromosome and perhaps the family’s greatest chocolate lover. Max Chocolatier first opened in Lucerne and now is popular on a small Zurich street as well. Some  of the chocolates take four days to produce and may include a bit of gold dust. 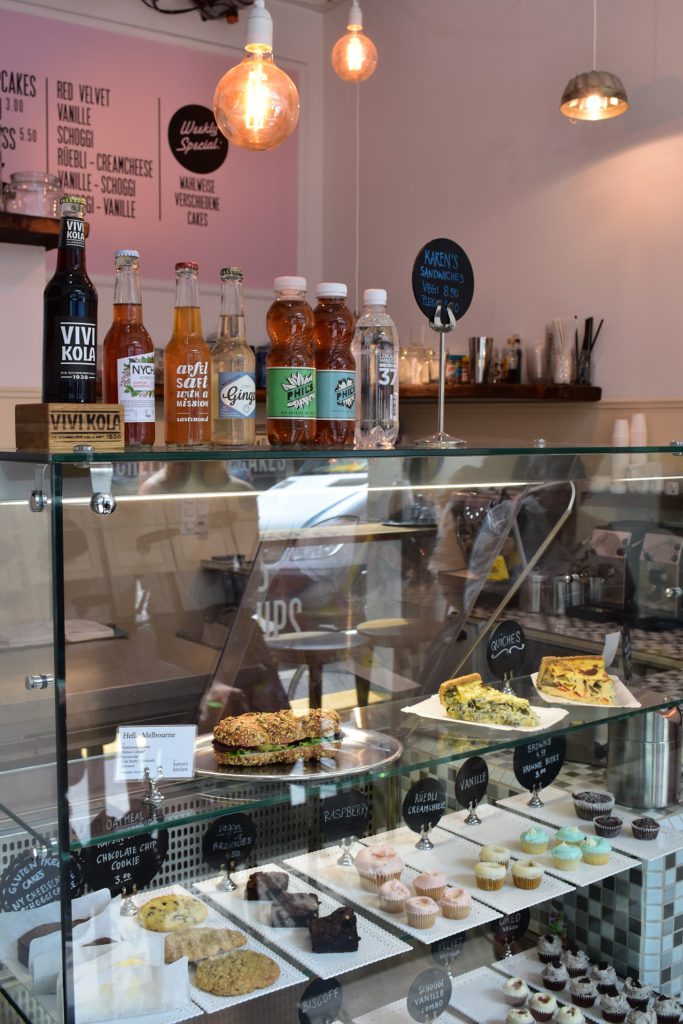 Cupcakes by Michelle in Zurich

Honold is now run by the fourth generation of the same family and are especially known for their variety of truffles—some with gin or brandy seem to have as much liquor as in a shot glass!

But Fryer tells us, there are other sweet treats locals love—we go to a gummy bear shop (love the new Matterhorn version) with all varieties beloved by local school children  that are made with less sugar than traditional candy and 20 per cent fruit juice.  There are gummy bear wedding cakes!

Hasta makes exotic flavors of ice cream—everything from Black Sesame to one flavored with cardamom and pistachio, ginger and cassis but the dark chocolate is the most popular.

And Michelle’s is known for her delectable cupcakes—25 different flavors rotated seasonally. I loved the carrot with the cream cheese frosting, red velvet is the most popular.

While shops like Sprungli and Honold are large with several outlets, others are tiny on cobbled streets barely wide enough for a car. All the better for those aiming to discover something new in the country of chocolate. “There are new ones coming all the time,” said Fryer. “New ideas keep coming up.”

A tip: if you are going to sample several, start with the lightest chocolate and lightest flavor.  “Keep on exploring,” she said. “And Keep on enjoying!”