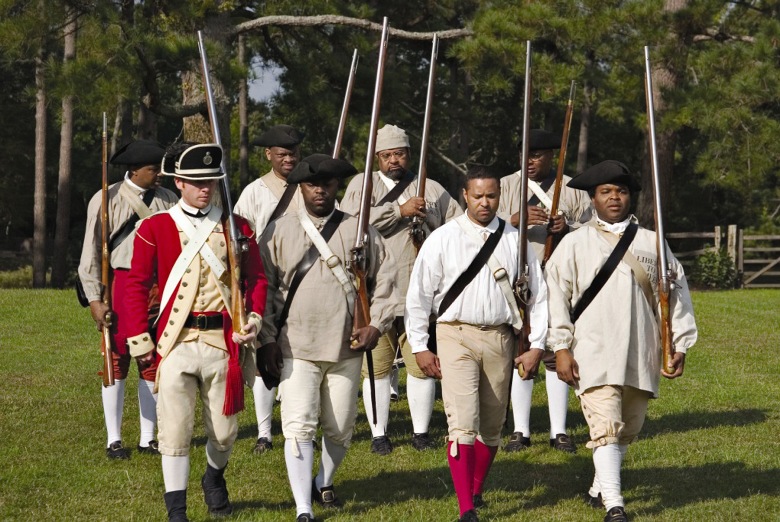 Brothers in Arms at Williamsburg

It’s your personal property. Name it anything you like. Give it as a birthday gift or throw it on the ground when you get angry or frustrated.

That was the way slave children were treated in 18th-century Virginia. They could be sent away from their parents at any time, their name abruptly changed. The kids touring the elegant Peyton Randolph House in Colonial Williamsburg — home to just two adults and 27 slaves, half of which were children and young teens — were trying hard to process that reality as Bridgette Houston, dressed as an 18th-century slave — “interpreted” African-American revolutionary history for the group of parents and kids that visited here recently on a sunny fall day. If your kids complain that they’ve got too many chores, let them imagine what it would have been like to have to help carry wood and water, chop spices, pluck squab and weed the garden — all at the tender age of five. As a slave, they might have slept at the foot of their master’s bed or been forced to stand motionless for hours in the master’s dining room waiting to clear the table, as talk about freedom from England swirled around them.

“I didn’t realize how hard the kids had to work,” said 11-year-old Camille Woody of North Carolina, who was touring with her family. “It’s sad!”

“This is our history and it is important for people to understand the contribution that they (slaves) made to this country,” Houston said. In fact, many who visit here don’t realize that more than half of the 1,880 residents of Colonial Williamsburg during the Revolutionary Period (1764-1789) were African American, the vast majority enslaved.

And as Colonial Williamsburg (www.history.org) reaches out to families with a growing array of interactive programming throughout the year, there are many more opportunities for visitors to learn and experience African-American history, observes Patricia Brooks, manager of African-American initiatives. (African-American programming was first initiated here 30 years ago.)

You might run into an “enslaved person” doing errands on the streets of Colonial Williamsburg and hear them explain why they don’t understand how their masters could be so passionate about freedom from England but not about freedom for African Americans.

“There cannot be true freedom unless all mankind is free,” “Eve” argues. Eve is Elizabeth Randolph’s personal servant who ran away to join the British (who offered freedom) along with other slaves from the household, only to be caught and returned. And then there’s “Locust,” a skilled carpenter, earning extra money during his free time. Take a walk through the historic area as African-American interpreters explain “in their own words” what life was like here for their families three centuries ago, or join evening programs that include stories and music passed down from one generation to the next. There is even a program that explores the challenges of slave marriages. What if you or your spouse were sold separately?

A short walk from urban Williamsburg — the sophisticated 18th-century capitol of Virginia is very compact, barely a mile long — there’s Great Hopes Plantation, which kids especially love and which gives families the opportunity to explore what life was like for families living as most Virginians did — on farms. Here they can “try on” life as an enslaved child or a farm child, weeding the garden, carting water (those buckets are heavy), perhaps dipping candles or stirring a pot in the kitchen. Recently, some 7,000 home-schoolers joined such activities during a special two-week program.

“Next year our goal is to spread the African-American story throughout the historic area,” adds Harvey Bakari, the manager of African-American History. “We have to break down a lot of barriers and misconceptions.” For example, many enslaved people were skilled craftsmen, while enslaved children of wealthy owners were sent to school. (It wasn’t illegal yet for slaves to learn to read and write.) And in a town brimming with political gossip and intrigue, it was often the slaves — who heard everything that was discussed at the highest levels — who were the best sources of the latest information.

Especially if your kids are studying American history and African-American history, Colonial Williamsburg, about a 40-minute drive from Richmond, as well as neighboring Yorktown Victory Center and Jamestown Settlement (www.historyisfun.org) are a great fall or pre-holiday getaway. “And not at all museum-y,” reports Kelsey Herrell, visiting with her mom and sisters from Tennessee.

Parents and grandparents, in fact, will find Colonial Williamsburg a lot less stuffy than they might remember from their childhood visits, especially when they seek out the interactive programs during the day and evening — everything from inviting the kids to dress like a Colonial, become an apprentice, play 18th-century games, quiz Thomas Jefferson himself or deliver the mail. There are upcoming Kids’ Holiday Weekends, special seasonal activities designed with kids in mind and even a special audio tour developed with the help of local teens at the Abby Aldrich Rockefeller Museum (www.history.org/History/museums/abby_art.cfm) where kids will love all of the historic toys and folk art on display and the chance to join a family workshop.

And next month, Colonial Williamsburg will open Charlton’s Coffeehouse, built on its original 18th-century foundations, which will offer a new venue for historic programming. Kids will love that in Colonial times, coffeehouses were a gathering place just as they are today. (And good hot chocolate too!)

“Not at all boring!” said Gregory Boisvert, who came from Utah with his parents and grandparents to celebrate his 10th birthday. “Very fun!”