Learning about grapes and history in the Champagne region near Paris 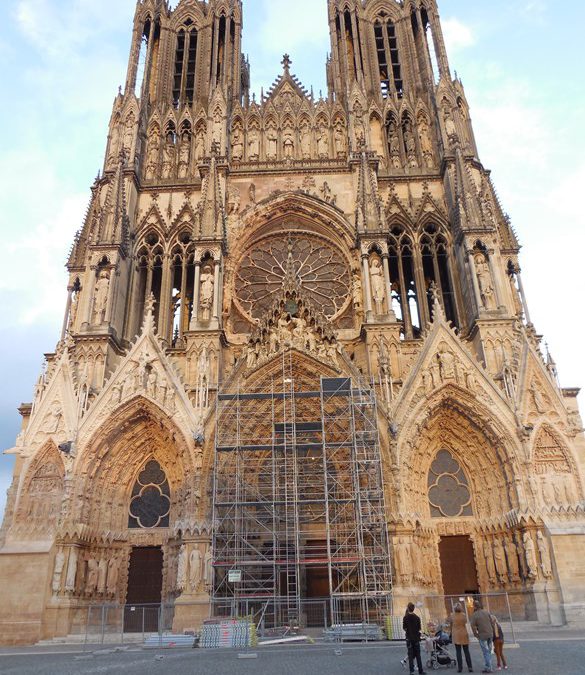 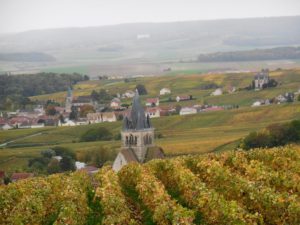 Vineyards in the Champagne region of France

Why all the champagne? For one thing, the owners of the home –Martine and Alexandre Penet—are champagne makers.  Alexandre’s family has been making champagne for generations.  Their eight year old daughter, shy in the face of non-French speaking strangers, wanders, in and out and I offer suggestions to Martine of gifts Alexandre can bring back from Chicago where he’s just left on business.

Chris Rooth, an Englishman, has brought us here. Along with his partner, he operates a small company called La Vigne u Roi that wants to encourage visitors to appreciate more than the major champagne makers like Taittinger and Pimmery, and more than the famous Reims Cathedral dating back to the 13th Century where many kings were crowned and a symbol of France during the searing battles of World War One, many right around here.  Chris tells us that before Paris was a city, Reims was the center of activity in this region. 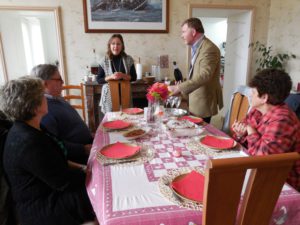 There are 15,000 growers here and 5,000 producers. Some own patches of vines no larger than a tennis court—or several parcels tennis court size, he explains as we look down on the orderly rows of vines glorious in the fall colors from the top of a  crest of a hill.

It’s the chalk in the soil that makes this such ideal growing area for the chardonnay and pinot noir grapes that are used for champagne.  “All about the Chalk,” Chris says, explaining it is a natural sponge that keeps the water in the soil and ends the minerality to the grapes.  Montagne de Reims stretches for 12 miles around the city where the grapes are grown on the hillsides.  They are also grown in Epernay in some 281,000 parcels of land.

“Champagne is all about the blending,” Chris explains.  The vineyards are scattered all over the place…and most are family owned.  There are around 12,000 labels of champagne.

He takes us to meet 36-year-old Nicolas Maillart in the Village of Ecueil who is the ninth generation of his family to be making wine here  since 1753—he took over from his father when he was just 26—and has growing reputation for achieving the highest potential of the vine.  His champagnes taste delicious! 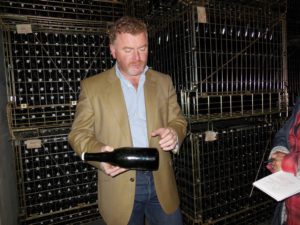 Chris shows us the Maillart operation from the mostly 21st Century machines, the huge vats where the wine is fermented, the cages where the bottles  are turned to get out  the sediment.  This process called riddling used to have to be done by hand, with the bottles put in wooden holes on a large board.  These vats can hold nearly 14,000 bottles — all of the wine from one parcel of land.  Later they are put in big oak barrels that have come from Burgundy

Then it’s all about the blending—that’s when the chemistry and the art come in.

Let’s not forget about those famous bubbles. That’s the result of the yeast and sugar and carbon dioxide that is trapped in the bottle.  These bottles might remain in the cave five years or more.  We look around at all of the bottles in this high tech cave—over 6 million euros worth!

As we taste his champagne, Nicolas Maillart comes by to say hello.  “You have to be respectful of the grapes,” he says, explaining that it is only in the last 60 years or so champagne has even been drunk by more than royalty and very wealthy people. 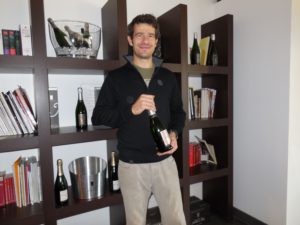 But it’s always been a wine of celebration. That’s probably because Reims is where numerous French Kings were crowned dating back centuries  into the 13th Century cathedral and they drank—what else—the wine of Champagne—to celebrate afterwards… but centuries ago, the wine was still wine.  We learn about Brut and extra Brut…about Vintage (only when it is a particularly good year) and non vintage.

We taste six kinds of Maillart Champagne.  It is so delicious we have to send some home.

On a tour like this, meeting the producers themselves, having lunch in their home, of course you get a much better sense of the tradition and the people who work so hard to produce champagne. This is so much better than just going in to a large tasting room. 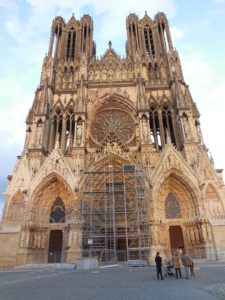 Cathedral in Reims heavily damaged in World War I

But we also learn about all the World Wars history here.  Reims was bombarded by German artillery for more than 3 years during World War I, virtually reducing it to rubble.  Restoration work is still going on at the famous Cathedral.  During World War II, Eisenhower’s headquarters after Normandy was in a school here; it is here where the Germans surrendered.

Everywhere in these villages, it seems, we pass World War I cemeteries—French, Italian, British and German.  Villages were entirely destroyed, all of their young men lost, Rooth tells us. He points out where were the front lines—how men arriving on trains to fight could go underground from the train station in Reims to the trenches and battlefields.

We stop in one village to see a monument—like one in every village—to the young men who were lost. There are pictures of some and the same names—brothers and cousins, we’re guessing.  Some 10,000 are buried in one cemetery—thousands more in another—neat rows of white crosses with a Jewish star interspersed here and there.  The loss is breathtaking.

I always knew champagne was for celebrations but until now, I didn’t know why or appreciate how much effort—how much sweat, tears and family history—it takes to create that bottle of bubbles.  It’s inconceivable to me that this other world of France—of rolling fields and tiny villages are just a 40 minute high speed train ride from Paris.

A word about the train—Rooth advised buying your tickets as soon as you know you plan to visit as high speed train tickets, like flights, fluctuate with demands.  Tickets can be had for as little as 30-40 Euros; my cousins who booked last minute, paid $100 E per ticket.

I had a French Rail Pass which meant I made a reservation on the train and then paid just $11 each way, plus a service fee.  But I forgot to bring our passport numbers to put on the Rail Pass.  Going from Paris, they didn’t even check our tickets; on the return, the conductor wanted to charge me $164 Euros.  He ultimately decided to charge me $20 but when I got to Paris, I went to the ticket office at the train station to see what the charge was for—apparently, I was supposed to get my ticket stamped before I got to the train.  I didn’t know that of course.

The kind train agent returned my 20 Euros.  “Just don’t do it again,” he said with a smile.

When we left Martine Penet’s home, armed with the recipe for the chicken cooked in champagne, we kissed and I invited them to come to lunch at our house next time they are visiting New York.  I hope they do.

Meanwhile, when we get home, we’ve got the champagne that will help us remember.