Learning about wildlife and photography in the Arctic Ocean 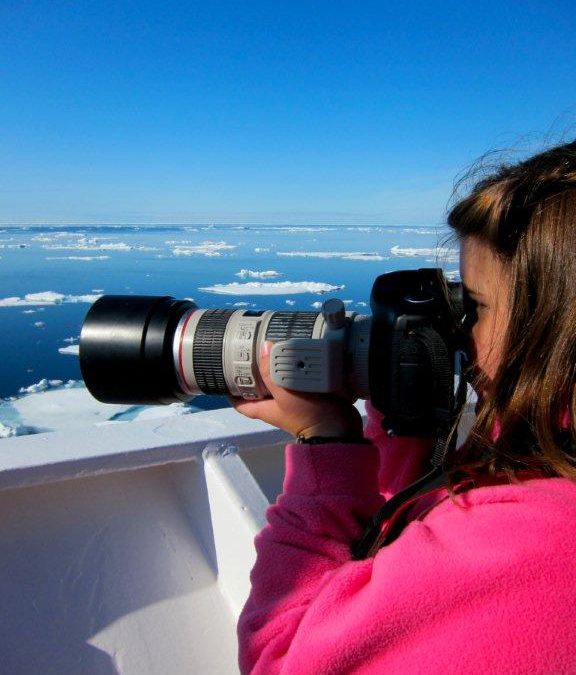 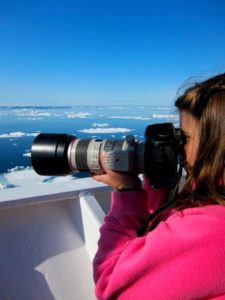 It’s 5:30 a.m. and we’re awake, outside and shivering, wearing more layers of clothes than we would on a New England ski trip, though we’re on a cruise in July.

But no one’s complaining aboard the Lindblad Expeditions National Geographic Explorer — not when a polar bear has just been sited on an ice floe just 90 feet from the ship. Did I mention we’re cruising in the Arctic — in the Svalbard archipelago, less than 1,000 miles from the North Pole where there are more polar bears (3,500) than people (2,500).

A polar bear sighting (we’ll see 16 before the week is out), a whale (two enormous blue whales swam and played right by the ship), sea birds (imagine thousands nesting on high cliffs) or walrus (60 of the huge creatures weighing a ton or more lolling right in front of us on a beach) are all reason enough jump out of bed, bolt from lunch, forgo a shower or get off the ship’s treadmill. It’s why the 145 guests have paid thousands of dollars and traveled thousands of miles to cruise through ice.

Temperatures on deck hover in the 30s, but we endure it for the privilege of watching and photographing the polar bears lolling on the undulating ice, feasting on seal, swimming. Because Lindblad has partnered with National Geographic, there are certified photo instructors and a National Geographic photographer on board to help us take the best photos we can of the glaciers (60 percent of this area is covered by glaciers), ice caps 1,000 feet deep, and of course, the wildlife.

“I got a picture of the polar bear with his tongue out,” 9-year-old Evie Plunkett said proudly. She’s here with her grandparents, using a camera and long lens loaned to her by her grandfather, William, himself an accomplished photographer. Evie chose the trip, her grandparents said, because polar bears are her favorite animal. They brought her, they said, to expand her horizons beyond Texas — Evie had never been out of the United States — and to encourage her interest in the natural world — their passion. “She has never been in such a wild environment,” her grandfather said.

Neither have most of us. Yet even on such an exotic and expensive trip (rates start at just under $7,500 per person) you’ll find children, and Lindblad Expeditions welcomes them here and on their expeditions to the Galapagos Island and Baja, among others, with discounts and special activities, including scavenger hunts (how many windshield wipers are on the bridge?), Zodiac-driving lessons, behind-the-scenes tours and special photo workshops. Over the summer, 40 percent of Lindblad passengers are traveling in family groups, 25 percent the rest of the year, in many cases with grandparents leading the way.

“It’s wonderful to share this while I can,” said Iro Sotiriadou, traveling from Cyprus with her granddaughter Melissa Hadjikyriakou to celebrate Melissa’s college graduation. (She earned a degree in photography.)

“This is something so different,” from the ice to the 24-hour light, says Captain Oliver Kruess, whose 5-year-old son loves being on board. “It’s exciting for kids.”

Just don’t expect the wildlife to pop out on cue. “It takes a lot of waiting and a lot of patience,” Evie Plunkett acknowledged. All the more reason, Captain Kruess suggests, for parents to be prepared with activities. Adults who have visited Antarctica and the Galapagos Islands, where wildlife is so abundant, were frustrated too, expecting to get closer and to see more.

But the searching — and waiting — adds to the allure. “Part of the benefit of going to places like this is to learn how to look,” suggests onboard archaeologist Carol Knott. There is a sense of adventure and unpredictability because we don’t know exactly what we are doing next — it depends on the ice and the wildlife. We don’t know when we might see a polar bear or a whale, or exactly where we will hike or when we will be able to kayak or cruise in a Zodiac. (I’ve never kayaked either where a crew arrives on a Zodiac to serve hot chocolate — spiked with schnapps.)

In-between the waiting, the hiking and the cruising are meals shared with new friends from around the world and all varieties of talks — one on glaciers, another on photographing the world by National Geographic photographer Chris Rainier. The naturalists “recap” what we’ve seen and done at the end of the day.

“When you spend your life organizing for yourself and your business, it is great that someone has already scoped it out … you don’t feel as if you are going to miss anything,” says Deborah Williamson, a New Hampshire educator.

The kids on board, of course, have an entirely different perspective. The ship is bigger and the food better than Evie Plunkett expected. Henry Douglas, 12, couldn’t believe it never got dark. After the polar bears, kayaking (Evie’s first time) and the “polar plunge” into the 40-degree water, Evie’s favorite part of the trip is ice cream at lunch and again at dinner — a treat she’s not permitted at home.

“I’ve been telling my grandparents thank you a lot,” she said shyly.

But by the end of the week, I think, her grandparents were thanking her too — for allowing them to see this raw, wonderful place through her eyes.

“Definitely worth the money,” said Evie’s grandfather, as we got ready for our flight home. “We are really tickled Evie is taking to nature as much as we do … a perfect trip.”

For more on Eileen’s trip to the arctic, read her travel diaries