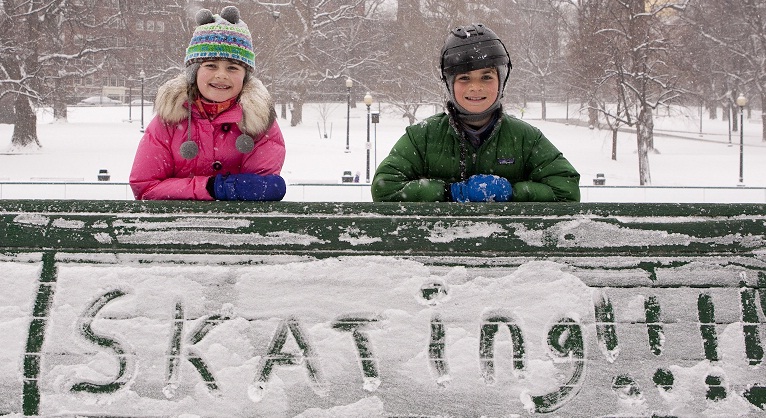 While in Boston, try ice skating on the Frog Pond in Boston Common (photo by Mark Hunt)

Sure we’ve all heard of Paul Revere and John Hancock, but what about Crispus Attucks?

It turns out Attucks, a dockworker in his 40s, was an important guy in Revolutionary War times too — the first American in fact to die in the colonists’ fight for freedom from Britain. He also happened to have been African American and Native American. He was shot during the Boston Massacre in 1770, along with four others, in an altercation between the angry colonists and British soldiers. Attucks is buried alongside the other massacre victims at the historic Granary Burying Ground where some of America’s most notable citizens lay, including John Hancock and Paul Revere.

A stop at the Granary Burying Ground is always on Boston’s famous Freedom Trail tour, which we took recently, with a group of inner-city high school boys who live and attend school in our suburban town under the auspices of A Better Chance.

None of us had heard of Crispus Attucks until our visit to Boston’s African American National Historic Site on Beacon Hill, our starting point before heading off on the Freedom Trail.

“When people think of the American Revolution, they don’t realize there were a significant number of African Americans involved. It’s a forgotten story,” says Jarumi Crooks, the national park ranger assigned to the site and an African American himself.

L’Merchie Frazier, director of Education at the Museum of African American History, notes the irony that Attucks died fighting for freedom in a colony in which at the time condoned slavery. “Understanding African-American history is a significant part of American history,” she said.

And a winter foray to Boston — whether you are touring colleges (there are more than 100 campuses in Massachusetts) or just looking for a winter getaway — is a good place to start, especially with the reopening this past December after a multimillion-dollar restoration of The African Meeting House, the oldest African meeting house in America. The three-story brick building, built in 1806, was constructed primarily by free black artisans and served as school, church and meeting place. Newspaper editor William Lloyd Garrison founded the New England Anti-Slavery Society here; Frederick Douglass spoke out against slavery here. “It was a place for plans and strategy,” said Frazier. “The building was built with this purpose.”

Even better, the Greater Boston Convention and Visitors Bureau has a Family-Friendly ValuePass offering more than 70 special discounts and plenty of appealing hotel deals. We stayed on the Cambridge side of the Charles River at the Royal Sonesta — the boys loved the hot tub and indoor pool and young fashionistas will love the huge mall next door — which touts an overnight package starting at $149 a night, including garage parking.

Boston is a great place to enjoy a 21st-century hotel, take a college tour, grab some good eats (Anna’s Taqueria, around the block from the Museum of African American History is a good bet as is, of course, all of the food stands at historic Faneuil Hall), college sports (we took in a Boston University hockey game), as well as to revisit some important history lessons we somehow missed.

The American Revolution proved a turning point in the status of African Americans in Massachusetts. In 1783, slavery was declared unconstitutional, though African Americans certainly weren’t treated equally, forced to ride on the outside of trains.

There are many African-American stories to be told here, especially along the North Slope of Beacon Hill, from Revolutionary War days onward and including the Abiel Smith School, the first building in the nation constructed for the sole purpose of housing a black public school. Abiel Smith was a philanthropist who left money to the city of Boston for educating African-American children and his school remained Boston’s only black public school until schools were integrated in 1855.

But attending that school was no picnic, Ranger Crooks told us as we sat where African-American children had — more than 60 students to one teacher in a single room with no heat or books. Today, the Abiel Smith School galleries feature rotating exhibits and a museum store. It’s part of The Museum of African American History, New England’s largest black history museum. The museum has four historic sites dating back to the 1770s in Boston and on the island of Nantucket.

Take a guided walking tour of the Museum’s Black Heritage Trails® on Boston’s Beacon Hill that includes the 54th Regiment Memorial (The Volunteer Infantry was the first black regiment recruited in the North during the Civil War and the subject of the movie “Glory.” The Regiment’s Sgt. William Carney was the first black soldier to receive the Medal of Honor.)

Stop at the John J. Smith House — his barbershop became a center for abolitionist activity and a rendezvous for the Underground Railroad. George Middleton was a Revolutionary War veteran who led one of three black militias that fought against the British. His house on Pinckney Street built in 1787 is one of the oldest on Beacon Hill.

During the decades before the Civil War, over half the city’s 2,000 African Americans lived on Beacon Hill, just below the homes of the wealthy whites. The historic buildings along the Black Heritage Trail were the homes, businesses, schools and churches of a community organized from revolutionary times to help those who faced discrimination and slavery, working toward equality and freedom.

“It’s one thing to learn the history in school,” says Frazier, but different entirely “to be in the middle of where all the change happened.”