Learning all about Junkanoo, the festivals kids love most in the Bahamas 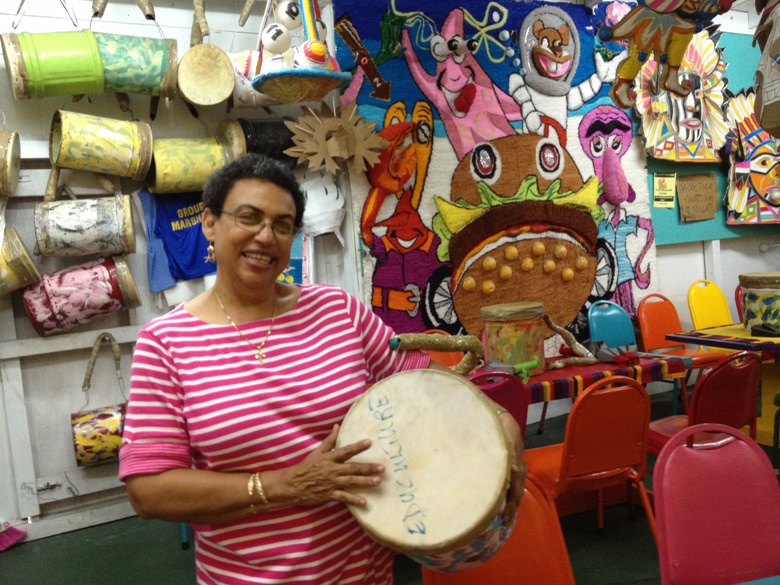 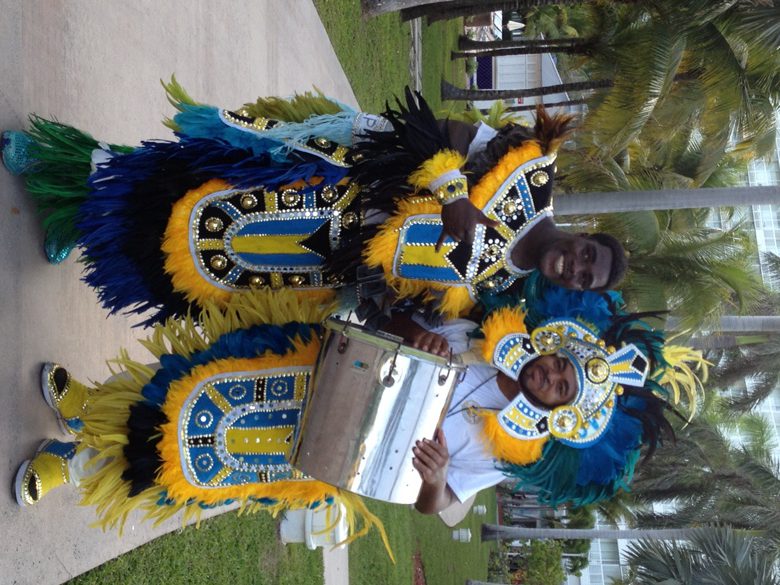 DAY 3 — The next time you can’t get the kids away from the computer, the smart phone or the TV , hand them some strips of crepe paper, some cardboard, some wire and challenge them to make a costume.

That’s what thousands of Bahamians—kids as well as adults—do every year for the Junkanoo Festivals that traditionally are held on Boxing Day (the day after Christmas) and on New Years Day.

“This engages thousands of young Bahamians. They just have to hear one drumbeat and you have their full attention,” said Arlene Nash, the Nassau grandmother who has made it her mission to do just that, starting the Educulture Bahamas Junkanoo Mini-Museum and Resource Centre in her childhood home in Nassau .

What began with programs for school kids in the Bahamas in 2000, now attracts cruise ship passengers and other visitors for workshops in Junkanoo costume making.  And what amazing costumes they are, put together with thousands and thousands of strips of brightly colored crepe paper adorned with feathers and gold and silver buttons.   You might make a head dress or a wall hanging to take home.

As soon as one festival is done, the group—that may include hundreds of people—start working on their theme and their costume design for the next as there are competitions.  Young Bahamians, said Nash, earn thousands of dollars gluing the paper onto the costumes.  While the groups rehearse weekly—dancers, drummers, horns, typically working in “shacks” that might be simple back yard cottages around the island.

The Junkanoo Festival began, she said more than 300 years ago after Africans were enslaved and brought to the Bahamian Islands.  They were given 3 days off a year—around Christmas—and made the most of that time off by staging a festival to recreate those from their home land with costumes, bells and drums.

They used what they could scrounge for costumes—sponge, rags or newspapers, for example. Nash said using those newspapers might have been “passive resistance” on the slaves’ part as they were forbidden from learning to read or write.  She has those historic costumes in the museum as well as more recent ones.  They used rags—she has some of those costumes in her museum as well as recent ones—a Transformer character, Big Bird.   Last year, Nash was a hail storm in baby blue and white.

These costumes can weigh 80 pounds but the marchers who number in the thousands—as do the onlookers –don’t care.  The parade starts at midnight and lasts into mid day the next day   “We’re still dancing at mid day,” she said.  “It just captivates you every year.”

There are Junkanoo Festivals on other Bahamian Islands as well but none as big as in Nassau where there is also a junior Junkanoo Festival in which local schools compete and parade.  Even preschoolers take part.  At the Grand Lucayan Resort on Grand Bahama Island, we literally had walked into the Junkanoo Parade that goes on every week with bell ringers, drums and of course, the fantastic costumes.

Families are  central to Bahamian life and culture and that’s true at the Junkanoo Festivals as well as off-the-tourist track restaurants like Bahama Grill run by a local family and frequented by locals who come  for the BBQ chicken and ribs accompanied by peas and rice.

Our guide Romeo Farrington says it’s important for tourists to see more than Nassau’s famous Straw Market or Atlantis’s water slides. “Too many people never leave the resort while they are here,” he says.

They are missing a lot—even the chance to be hosted by locals via the People-To-People experience that is completely free. 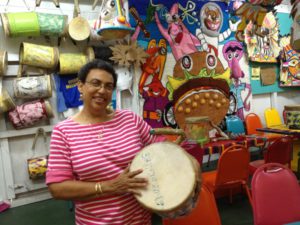 In Nassau with Arlene Nash

“We have a fabulous time telling stories with the costumes, the dance and the music,” said Arlene Nash, adding that Bahamians want to share that with visitors.   “You can tell a story and reinvent yourself each year.”

And what can be more fun than that.