Learning all about the Star Spangled Banner in Baltimore and Washington 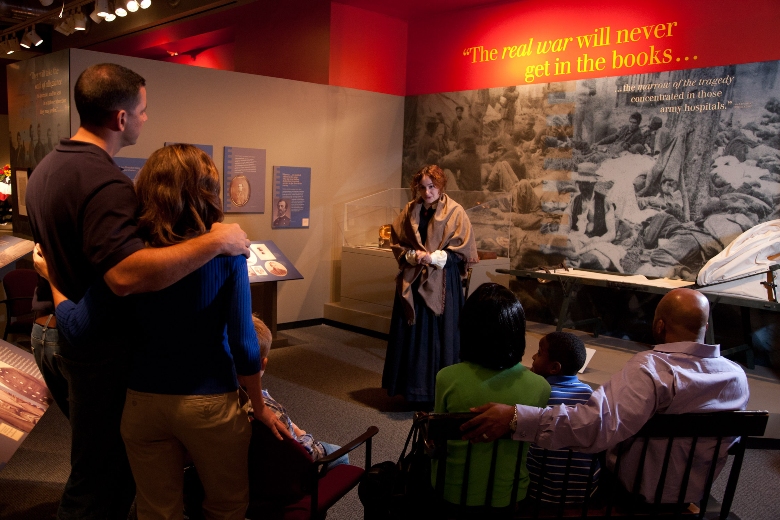 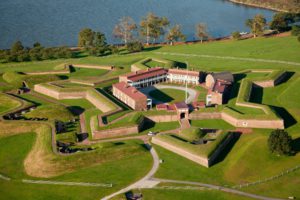 The flag was just what the major ordered.

It was gigantic — 42-by-30-feet — so big that the flag maker couldn’t even lay it out in her house. Each star was two feet wide!

This was during the War of 1812 and Major George Armistead, the commander of Fort McHenry in Baltimore, Md., had commissioned local flag maker Mary Young Pickersgill to sew a flag “so large that the British will have no difficulty in seeing it from a distance.”

Pickersgill worked night and day with the help of her teenage daughter, two teenage nieces and a free African-American apprentice to finish the job in just six weeks. It had 15 stars and 15 stripes, one for each state. She delivered the flag and a smaller “storm flag” to Fort McHenry in the summer of 1813.

She, of course, didn’t know how important her flag would become — the original Star Spangled Banner — all because of a strange confluence of circumstances.

A little more than a year after Pickersgill delivered her flag, Francis Scott Key, a young lawyer and amateur poet, was sent to help negotiate the freedom of a doctor being held by the British outside Baltimore harbor.

Lucky for us, Key wasn’t allowed to leave after he got the British to agree to set Dr. William Beanes free, he’d apparently heard too much about the British plan to attack Baltimore.

As a result, Key watched the epic overnight battle for control of Fort McHenry from the deck of a U.S. truce ship. The Americans were far outnumbered, the weather was horrible, but their luck held: the wooden British ships — their crews fearful of getting too close to the canon fire — were too far away for their rockets to do much damage to the fort. The British ultimately retreated.

When dawn broke and Key saw that gigantic American flag flying over the fort, he was inspired to write down the first words of what would become “The Star-Spangled Banner”: O! Say can you see, by the dawn’s early light, a large red, white and blue banner? Whose broad stripes and bright stars … were so gallantly streaming! 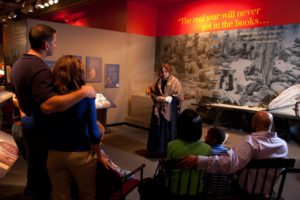 Today, you can see the Star Spangled Banner at the Smithsonian National Museum of American History where it is one of the most popular exhibits. You’ll learn how it was a keepsake in Major Armistead’s family for generations, with snippets cut off and given away as gifts. It didn’t come to the Smithsonian until 1907. (Learn about the painstaking conservation effort undertaken in the 1990s to protect and preserve the flag.)

There is an entire website devoted to the Star-Spangled Banner, complete with interactive games and the opportunity to share your thoughts about what the flag means to you.

But I think learning about the flag should start in Baltimore with a visit to Fort McHenry (walk among the canons and peer into barracks that look as they might have during the Battle of Baltimore).

Visit the home of Mary Pickersgill where the kids can dress up in period costumes and act out their own story of the Battle of Baltimore in the Discovery Gallery of the adjacent Jean and Lillian Hofmeister Museum Building, make their own flag or even write to soldiers serving overseas today. Schedule your visit when you can meet “Mary Pickersgill and her family” and learn what life was like in the early 19th century.

See Key’s original manuscript at the Maryland Historical Society. (There is a Star-Spangled Baltimore Pass that provides discounted admission to these sites.) Also, check out the Star-Spangled Banner National Historic Trail.

Key finished writing his poem on Sept. 16, 1814 and gave it to his brother-in-law who then gave it to the local newspaper. People sang what was then “In Defense of Fort McHenry,” to the melody of “To Anacreon in Heaven,” a British drinking song.

A few weeks later, a local song publisher changed the name and published it as “The Star-Spangled Banner,” but it took until the Civil War before the flag became the enduring symbol of the United States. Did you know the Star-Spangled Banner wasn’t even officially decreed the country’s national anthem until 1931?

While you’re in Baltimore, stop in at Babe Ruth’s birthplace and learn the connection between the Star-Spangled Banner and baseball. (The song was first played in September 1918 during the seventh-inning Stretch at Cubs Park in Chicago in the first game of the World Series. It was an homage to all those fighting in World War I.)

Who says history is boring? This summer, wherever you go, inject a little history in your vacation travels. Baltimore is a good place to start as the city commemorates the Bicentennial of the War of 1812, a tribute to Harriet Tubman and the Underground Railroad and the continuing 150th anniversary of the Civil War. There’s even a new kids’ book about the Battle of Baltimore, “Calvert the Raven in the Battle of Baltimore,” written and illustrated by local author J. Scott Fuqua. Fuqua said he was inspired to write the book “to make history exciting for kids.”

(The Four Seasons in Baltimore, which has a great location overlooking Baltimore’s fabulous Inner Harbor and is known to be welcoming to kids, has a deal to book a second room at half price. You’ll also find lots of deals in Washington, D.C., like at the Fairmont, with its third-night-free deal, healthy kids’ menu and its partnership with the Smithsonian — a portion of whole wheat Maryland Mac and Cheese supports the Smithsonian.)

Army Captain Jeremy Mahoney, just back East from serving in Hawaii, has been taking his kids to these historic sites for years, including Fort McHenry. “I love history and I want them to know it,” he explained. “If you don’t know history, you’ll make the same mistakes again.”

(If you are going to Washington DC, check out Eileen’s new Kid’s Guide to Washington DC from Globe Pequot Press and for more summer ideas, The Taking the Kids Very Best Family Summer Vacation Ideas. You can also follow TakingtheKids on Twitter and Facebook.)