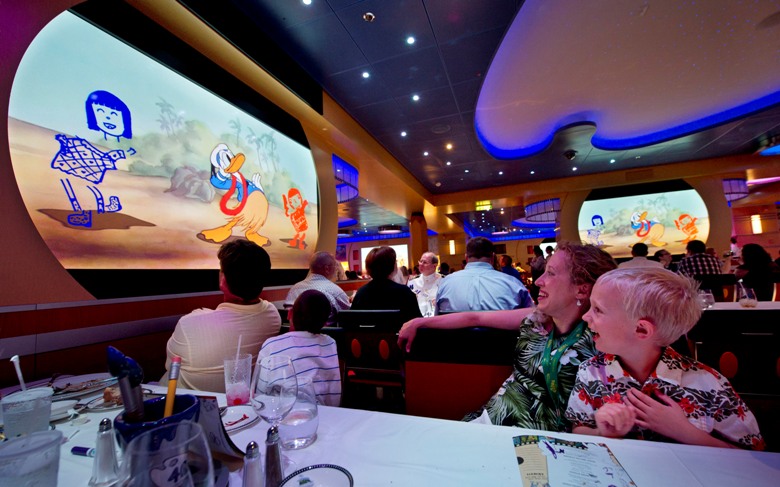 This is one time you’ll want to encourage kids to color inside the lines. Grown-ups, too.

As soon as you sit down for dinner at Animator’s Palate aboard the new Disney cruise ship Fantasy, your server hands you a green marker and a special placemat and instructs you and the kids to draw your own character within the blue lines. (One of the teens I was with drew a fetching Cyclops.)

Just before dinner, as Mickey Mouse appears on large monitors around the room, our placemats are whisked away. While we eat (have you ever tried buttered popcorn soup?) we’re treated to a montage of famous food-themed moments from Disney cartoons (think Lady and the Tramp sharing that strand of spaghetti). But the piece de resistance isn’t dessert, though the warm chocolate lava cake certainly is yummy. It’s the magic that has animated our rudimentary green stick drawings and brought them to life on the huge screens around the dining room. Your characters march and skip and dance with Mickey, Jiminy Cricket, Cinderella and Snow White.

Wow! Even the jaded 17 year olds I’m with are impressed. At the end of the show, each of our names — as we signed them on our placemat — is listed on the credits as “guest animator.” We leave the dining room smiling, clutching our drawing that has been returned embossed with a gold seal proclaiming each of us an “Official Disney Animator.”

You’ll find that irrepressible Disney magic wherever you go on this 4,000-passenger ship. The Fantasy is the sister ship to the Disney Dream, with one big difference: The programming has been designed to entertain and wow you and your kids for seven days, instead of three or four. And from what I saw on a three-day preview cruise just before the ship’s inaugural sail, it works. (For the latest prices and availability, check www.disneycruises.com.)

That means more special dinners and menus (think princess and prince dinner, a captain’s gala and pirates evening) and more than 120 different youth activities. According to Jen McDonald, who manages the 77-member youth staff that oversees programming for some 1,500 children, programs start with a nursery for infants (parents say the $6 an hour charge is well worth it for a facility that rivals the best day care centers) and include a 9,000-square-foot teen club with its giant 103-inch LCD screen, the opportunity to create videos, spin music tracks and sun on a private deck area. If your kids are crazy for Disney characters, they’ll have two dozen unique character experiences on board that they won’t get in the theme parks. (Story time with Belle, perhaps? A Tinkerbell talent show? Fun and games with Captain Hook?)

There’s the first onboard Bibbidi Bobbidi Boutique where little girls were patiently waiting in their princess gowns to be transformed into princesses with special updos, including one with multicolored hair, sparkly nail polish, eyes shadow and face gems. One mom from Michigan noted her daughter never sits so patiently when getting a hair cut at home. If you’d rather be a pirate — there is a special pirate night complete with fireworks — the Bibbidi Bobbidi Boutique can also accommodate pirate makeovers for boys, as well as girls.

There are two new Broadway-caliber musical shows, including “Disney Wishes” about three best friends about to graduate from high school and a Muppets Adventure Game around the ship where you uncover clues by use of a dozen pieces of “Enchanted Art” that come to life as you stand in front of them. (In case you are wondering, the Enchanted Art looks like a painting but is really a framed LCD screen that “recognizes” a guest is present and activates the animation. What’s even cooler is you will see something different another time you visit.

Kids gave thumbs up to the new AquaLab — an 1,800-square-foot water play area on Deck 12 with pop jets geysers and bubblers.

There are scores of activities scheduled for the entire family to share (everything from family dance parties to first-run Disney movies and game shows (how well do you really know your mom and dad?) but a surprising array for adults, too.

In addition to the adults spa, there is a special adult pool and sun deck, adult beach on Castaway Cay, the cruise line’s private island, two first-rate adult-only restaurants and a brand-new adult entertainment district, Europa, designed to make you feel as if you are club-hopping across Europe — from an Irish Pub to a London dance club to an Italian bar complete with parked Vespa and intimate French boudoir, each with signature cocktails. (Think private label Taittinger Champagne at Ooh La La where you relax on Louis XIV lounges.)

If I sound impressed, I am. I like the little touches — the fact that counselors will pick the kids up from a late-dinner early so parents can relax, that there is no charge for late-night children’s programming, as is the case on other cruise lines, that some rooms have a small, round tub in the shower stall that is ideal for bathing young kids and that the beds are high enough to put suitcases underneath. The youth staff is prepared to welcome most youngsters with special challenges and they speak at least a half-dozen languages. The menus are designed to encourage kids to try new foods — at no extra charge, of course, and most important, every effort has been made to make sure that everyone — kids, parents, grandparents — gets time and space to do what they want. (The Disney ships attract a lot of multigenerational groups.)

No wonder Tom Staggs, the chairman of Disney Parks and Resorts, who was about to sail with his wife and three sons, says bookings on Disney Cruise Line are ahead of last year, despite consumer concerns in the wake of the Concordia tragedy and the fact that half of those who sail with Disney are first-time cruisers — those most skittish about cruising now. Disney has made it easier for would-be cruisers to try their ships, too, with sailings this year from New York, Galveston, Los Angeles and Seattle.

Bronlyn Holland, 10, from Georgia was preening in front of the mirror at the Bibbidi Bobbidi Boutique, the sparkles glinting in her hair. She’d saved her money to pay for her $54.95 makeover herself. “I’ve always loved princesses,” she explained. “You never are too old to be a princess!”

Certainly not aboard the Fantasy.