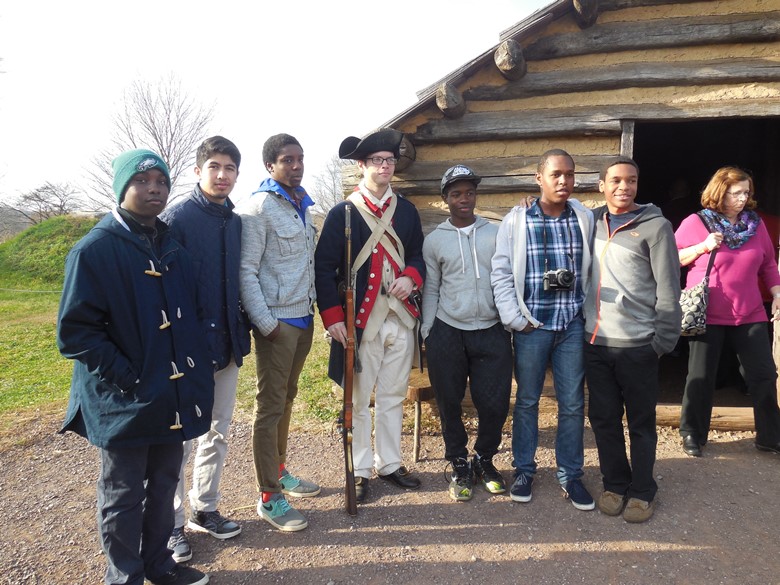 That’s how many soldiers were living and working at Valley Forge in the winter and spring of 1777-78.  There were another 500 women who did laundry and other chores for the men.  They often had their kids with them and were paid for their work.  Valley Forge was much like a military base today with enlisted men, officers and families — African Americans, Germans French, Native Americans — representing the population of the 13 colonies.  Every type of work was being done here — blacksmiths, shoemakers, cooks, bakers.. .it was a veritable city.   In fact, it would become the fourth largest city in America with 1,500 log huts and two miles of fortifications.

The youngest soldier was just 11 — a drummer boy whose mother was a “camp follower” and father a soldier; the oldest were in their fifties and sixties.  They were as diverse as the people in the colonies — poor and wealthy, free and enslaved, those who were immigrants and spoke foreign languages and those who were native born and of different religions.

Valley Forge,  today a national park, was famously the winter encampment of the Continental Army where Washington and his officers hunkered down some 20 miles from where the British had occupied Philadelphia —a day’s march.

Today, Montgomery County, a short drive from Philadelphia offers that ideal mix of history, outdoor fun (Spring Mountain has canopy tours in summer and fall; skiing, snowboarding and tubing in the winter and an inexpensive lodge that would make a good base for a visit here). There’s also plenty of shopping including the huge King of Prussia Mall with more than 400 stores, the largest mall in terms of leasable space in the country.  On a Sunday morning, Philadelphia Premium Outlets in Pottstown was packed too. 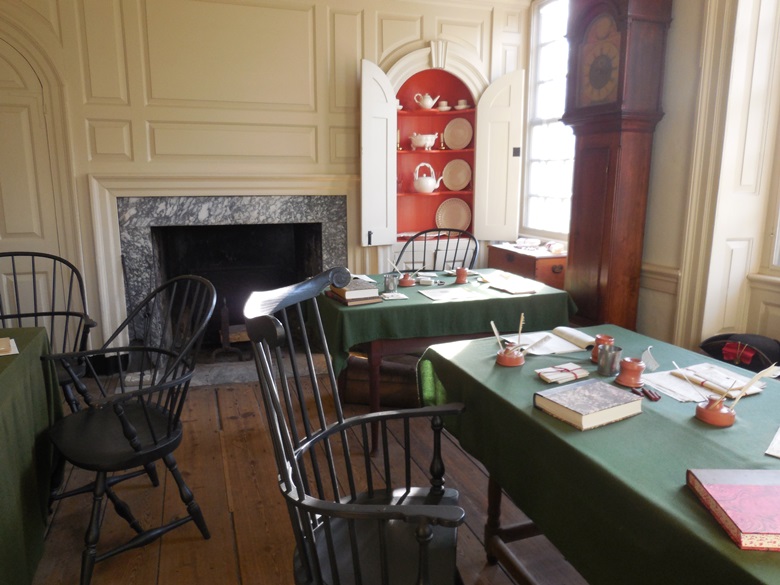 But history first!  We are in Valley Forge with our group of scholars from the Westport CT ABC House.  After a daylong excursion in at the historical sites in Philadelphia the previous day this was a perfect way to end a beautiful fall weekend.

After fighting for more than two years, Washington’s troops were exhausted, lacked supplies, their shoes were worn out and adequate winter clothing was scarce.  The strategy of gathering the army at Valley Forge was to concentrate the soldiers so that they could protect the countryside and better resist a British attack, as well as keep an eye on what the British were doing in Philadelphia.

The downside: disease that killed nearly 2,000 people. It was the deadliest winter encampment of the eight year war.  “Things were not going well for the army,” explained Dave Lawrence, a guide. “The army was worn out.”

There is no better time than just before the holidays to visit. On December 19, 1777, General George Washington’s Continental Army “marched in” to Valley Forge to set up winter quarters.  Every Dec. 19, an annual event commemorates their arrival and determination to persevere against insurmountable hardship and difficult conditions during their 6-month encampment.

The event is free — a candle-lit guided walk to the Muhlenberg Brigade huts where you’ll encounter a living continental camp. Warm up in the Visitor Center with 18th Century music, refreshments, and more! 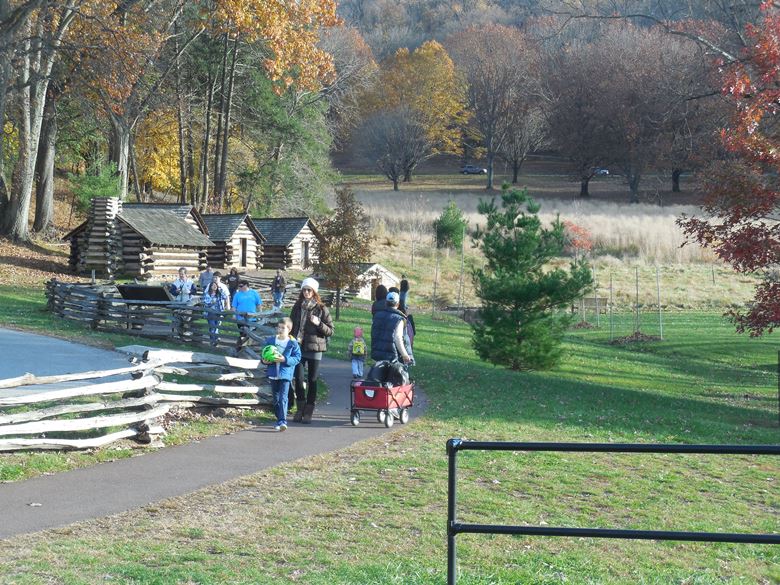 Valley Forge is huge — you can hike, walk or bike on 26 miles of trails with exhibits and historic markers explaining aspects of park history.  There’s also a 10-mile auto tour — you can get an audio version or take a cell phone tour (484-396-1018). Rangers also lead tours.

We opted for a 90 minute Trolley Tour from the visitor center that’s offered daily in the summer and weekends the rest of the year that enabled us to see the high points including  the house that served at George Washington’ headquarters.

We peer into the small re-created log huts where as many as 16 soldiers lived in bunks one on top of another. Incredibly, the soldiers built over 1,500 of them, felling the trees and dragging the logs back miles — 80 logs for just one hut.  One ranger is in Continental Army uniform, explaining that the men didn’t have uniform weapons. Their rations included rum or vinegar — supposedly to help purify the water.  “The kids really like to hear about the weaponry,” said Will Roulett, the ranger dressed as the continental soldier

Life wasn’t always harsh.  There was music, games and celebrations.  Washington even played a game of “wicket” on one occasion similar to baseball.

People may think the troops were taking “a vacation,” from war, said our guide Dave Lawrence.  “But that’s a big misconception. The war never stopped.”

The men were drilling and learning to be a cohesive army.  “The vast majority of a soldier’s life is spent not fighting, but making a place to stay and survive…it was an incredible amount of   manual labor.”

It’s important to remember that the new country hadn’t had a standing army so General Washington had the almost impossible task to organize one while fighting the war, convincing the soldiers to shift their allegiance from their home state to the United States, teaching them to use the same tactics.  “Out of Many, One,” was the motto.

Farmers weren’t always thrilled by the soldiers’ arrival — their fields were compromised, the army asking for food when they didn’t have enough for their own families.  Many were Quakers who were pacifists. Soldiers had cleared forests for miles and had requisitioned farm animals.

The rains and so many people turned the fields to mud.  But as soon as the army left, the farmers tore down the huts and by the following summer they were growing crops again.

A century later, work started to preserve the land where the encampment stood and that work continues today, honoring the sacrifice and triumph of the Continental Army.