Learning to make sense of history in Pompeii 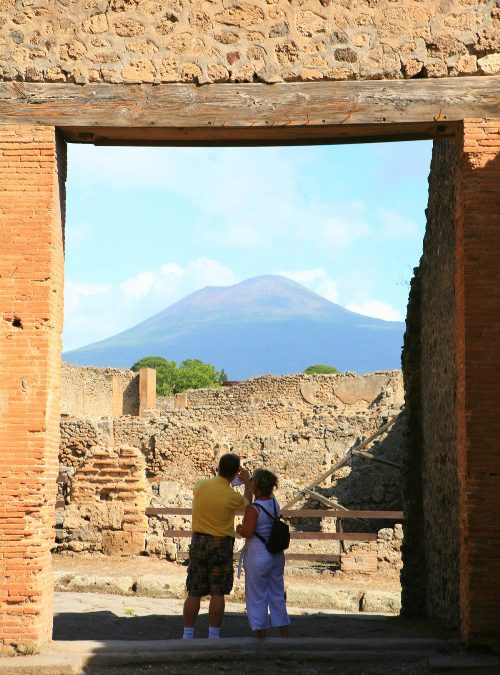 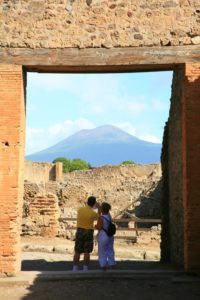 Up, up the steep gravel path.

It’s only a half-mile but a steep 40 percent grade makes it seem much longer. After all the eating aboard the Disney Magic cruising the Mediterranean, we’re glad for the exercise as we head to one of the most famous volcano craters in the world. Mt. Vesuvius.

It’s hot but not too grueling and we’re smiling — as are the other families making the trek around us.

On any cruise, it can be tough to choose the right excursions for a family. Excursions can be expensive — especially in Europe — and there’s nothing worse than being stuck in a gaggle of strangers all day with bored kids, especially when you’ve paid royally for the privilege.

I’ve had my share of doozies (for example, leaving the Coliseum because of a “stomach ache” that mysteriously disappeared as soon as my niece spied the shops). Even private tours are no guarantee you’ll have a good time, if the tour guide doesn’t take the kids’ interests into account and doesn’t speak good English (yes, we’ve been on that tour-from-hell too with bored tweens left sleeping in the van).

This time, it seems, we’ve chosen well for our two 14-year-old traveling companions and ourselves. Not only do we hike up to the crater but we’re also treated to lunch and wine tasting (the teens too) at the Cantina del Vesuvia where the grapes on the vines look too perfect to be real. We eat on a covered patio overlooking the vineyards and feast on local foods — salami, cheese, bread and olive oil and the most delicious pasta made with fresh tomatoes grown here at the vineyard. We go for a stroll in the vineyard with owner Maurizio Russo and can’t resist purchasing some of the excellent wine and olive oil.

We will visit Pompeii after lunch. Of course, if you can’t make it to Italy, you now have an alternative; Discovery Times Square (http://www.discoverytsx.com/) has just premiered “Pompeii The Exhibit: Life and Death in the Shadow of Vesuvius,” which showcases more than 250 artifacts, including some never-before-seen objects, a dramatic skeleton collection and the largest selection of body casts ever displayed. There’s also a new immersive movie experience that offers a time-lapsed representation of Mt. Vesuvius’ violent eruption from the moment of the massive explosion to its devastating aftermath.

Still, nothing can make up for being there, even if the boys do sample a little too much wine at lunch (this is Italy, after all, and they are ensconced at a separate table with other teens) and are bleary eyed as we tour Pompeii.

Mt. Vesuvius, which had been considered dormant and, in fact, was covered with vineyards and homes in 79 AD, erupted so quickly that it buried Pompeii — five miles away — and a nearby city, Herculaneum, in a matter of minutes. The “rain of fire” lasted for three days. More than 10,000 people died, their bodies buried beneath 30 feet of molten ash.

At Mt. Vesuvius, we can’t see much of the view because of the clouds, but we do see wisps of smoke from the still-active volcano, which has erupted some 50 times since Pompeii was buried so long ago. Today, 2 million people live in Vesuvius’ immediate vicinity.

As we peer into the crater, the teens climb up the huge black lava rocks and pose for pictures, the climb, no doubt, setting the stage for our visit to Pompeii. Once there, we stand in a dusty square trying to conjure up an image of a bustling gathering place with white marble floors, gleaming columns and fashionable people buying and selling wine, beautiful fabrics and exotic treasures. Imagine SoHo in New York, I tell the kids. In our imaginations, there are gorgeous bronze statues everywhere. Perhaps powerful politicians worked just across the way. In reality, all that’s left of Pompeii are a few crumbling columns.

Our guide explains that workmen building an aqueduct accidentally uncovered Pompeii in 1748. We tour a house with original frescoes on the wall, as well as a bakery and a fast-food restaurant. We see a campaign slogan on a wall and market signs with pictures of a lobster, bread, fish, for those who couldn’t read. The huge amphitheatre here, built in 70 AD, is the oldest and most complete pre-Coliseum style amphitheatre in the Roman world.

It’s never easy making an historic site interesting for kids and casts of human bodies aside, Pompeii is no different. The original Roman streets are uneven. There’s no multimedia presentation, no snack shop in the ancient city, no place to buy a drink — just a guide droning on.

Still, I wouldn’t have missed showing this place to the teens for anything. During our tour, we saw plaster casts of some of the bodies archeologists found. The kids, of course, loved the casts. It was hard to tear them away.

The big stones in the middle of the street are stepping-stones so Pompeii citizens could avoid the water that flooded the roads when it rained. Chariots, apparently, were wide enough to pass over the stepping-stones.

Kids may not exactly appreciate what they’re seeing — an entire ancient civilization preserved in volcanic ash, a site that’s been excavated for 250 years and continues to be excavated today. Archaeologists have extricated many objects from the ash — jewelry, bakery ovens, even paintings. They’ve also unearthed public baths, stadiums where gladiators fought and lived, wine shops with tasting rooms and stacks of ancient wine jugs, even a mall with small shops and paintings of fish and chickens.

You can read more about Pompeii’s last day on the Discovery Channel’s website (http://dsc.discovery.com/convergence/pompeii/pompeii.html). If you plan to visit Naples while in Italy, it’s worth the time to visit the National Archaeological Museum (Museo Archeologico Nazionale) where you’ll find relics from Pompeii and Herculaneum.

By the end of our tour, everyone was sweaty and tired but at least no one was griping.

The teens headed straight for the erotica souvenirs.

(For more on Eileen’s trip to the Med last summer, read her travel diaries)