Learning to scuba dive at a Caribbean resort 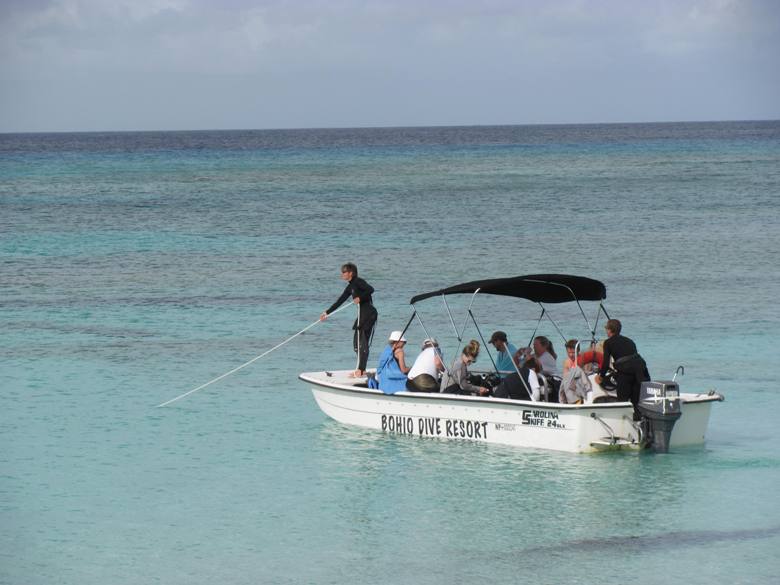 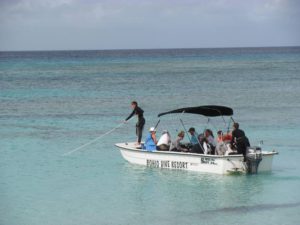 Check out the flounder hiding in the sand! Only his eyes are visible.

We’ve just finished the most spectacular dive of the day off of Grand Turk Island called “anchor” so named for a historic 10-foot anchor deep in the water. We’ve seen a Manta ray and sea turtle, hog fish, huge grouper, eel garden ray, that flounder and all kinds of other big and little fish–blue and purple, silver and spotted…as well as all varieties of coral.

“Let me introduce our newest PADI Diver,” instructor Hilary Sutton says when we get back on the small Bohio Resort boat. After six sections of e-learning, two mornings in the pool and four dives mastering the equipment, my nearly 20-year-old-daughter Mel is now a certified diver. We all applaud. (A tip: It’s cheaper and more fun to get your certification via online course and then at a dive resort. It’s a lot more pleasant to do your pool dives in the balmy Caribbean than in a chilly YMCA pool, as I did, and to do your certifying dives when there is so much to see.

We are here on tiny Grand Turk Island (pop no more than 6,000) that is the capitol of Turks and Caicos. It is here locals believe Columbus first touched landfall in the New World in 1492 (thinking the local Cactus looked like a Turk’s hat ; Caicos is cactus in Spanish. It is also NEAR here that John Glenn splashed down in 1962 after his historic orbits around the earth.

People come from around the world for the wall diving here just off shore—we meet a family from Buenos Aires, in fact. The island has maybe three or four restaurants, donkeys and horses and cows roam free though they are cared for by the government, says Earel Futtord, a retired social services official who gives me a brief tour of the island. We stop at the 60-foot tall light house built because so many ships were wrecking here in the nineteenth century. When ships continued to wreck, captains complained pirates were dimming the lights on purpose.

Turks and Caicos are composed of eight islands and some 40 Cays. After Providenciales (nicknamed Provo) —where 2/3 of the 50,000 people live, Grand Turk is the next largest in population but it has just 6,000 people and is just 7 miles long and 1.5 miles wide.

A dive vacation is different than a typical beach getaway. One couple we meet explains that you pick a dive resort not by the beds, the thread count of the sheets or the spa  “You pick by the dive opportunities .”

You want to be comfortable with the dive operation. “You have to trust them,” said Scott Flaherty, a veteran diver from Virginia.  Is the gear good? Do they count their people underwater?  He and his wife, he said, prefer small operations—where boats take no more than 10 people.

Equally important is the convenience. Here the dive shop, the rooms and restaurant are all a few steps apart; the reef is just offshore.  “My goal is not to wear shoes the entire time,” Scott Flaherty joked.

“We’re here about diving,” agreed Laurie Smithson, a nurse and avid diver from Phoenix.  She’d choose a place like this any time over a big fancy resort.

Managers Ginny and Tom Allan hug us goodbye.  That doesn’t happen at your typical resort hotel either.

We leave with Conch shells in our bags and lots of dive sites we still want to see. We’ll have to come back.