Learning to scuba dive with the whole family 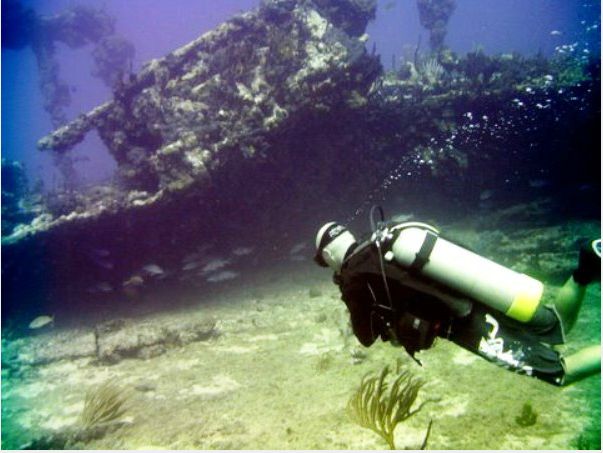 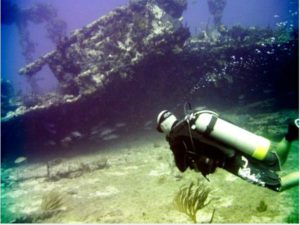 Never mind the moray eel. I’m focused on rubbing the “lucky” porthole of a ship that sunk here in a hurricane nearly 150 years ago.

Did I mention that I’m 60 feet underwater, diving mask on my face, breathing oxygen from a tank strapped to my back? That sunken ship — the RMS Rhone — is the top dive site here in the British Virgin Islands (www.bvitourism.com) and the morning we’re here, there are plenty of other divers in the water as we explore the wreck with Sail Caribbean Divers (www.sailcaribbeandivers.com).

While the Wreck of the Rhone, just off Salt Island, is a must-dive site, Mike Rowe, who oversees Sail Caribbean Divers, tells us that there are many wonderful dive sites here — canyons, tunnels, caverns grottos teeming with underwater life like Blond Rock, The Chimney, The Wreck of the Chikuzen and The Indians. The BVI boasts more than 50 islands and islets, after all.

I’m just thankful to share this spectacular adventure in paradise with my husband and kids. It’s terrific — and rare — when you can find something you all enjoy, especially as the kids grow older (kids as young as 10 can become certified divers) on vacation. Learning to dive is easier and less expensive — typically $300 — than you might think, thanks to the option of completing online coursework first from PADI, which reports that a million people become certified divers every year.

My husband, Andy, and son, Matt, had gotten certified some 15 years ago in the BVI — a father-tween bonding exercise; I did some years later on a trip to Green Turtle Cay in the Bahamas. My daughter Mel learned to dive last year on a mom-daughter trip to Grand Turk Island and then was able to use her certification in Bali when she was studying in Asia. (Read what I wrote about our Grand Turk trip.)

Now it is time for my daughter Regina Yemma and her boyfriend Dan Foldes to join our club. When we planned a sailing trip to the British Virgin Islands with The Moorings we knew we wanted there to be a diving component. Sail Caribbean Divers, a PADI 5-Star Instructional Development Dive Resort, the only one in the BVI with these highest ratings and with four locations, made it easy: Reg and Dan came to the BVI ahead of us to complete the first of their required three days of water instruction with Victoria “Vicky” Zgardzinski. First, they had learning sessions at the beach on Cooper Island, going over the fundamentals of the gear. (Certainly a lot more pleasant than when I did it in a chilly YMCA pool.) By the time we arrived, they were ready for their required open-water dives and we were able to rendezvous with our boat at Norman Island.

Reg and Dan reported they were stunned by the sea life — fluorescent-colored fish, countless coral and sponge species, spotted eels, and prickly urchins — on dives that were exhilarating and a little scary, as they learned to breath underwater and manage all the necessary equipment.

Their final dive before “graduation” — through the canyons of an underwater reef — “was over before we wanted it to be,” they reported. “Soon we were on the surface trading high-fives and fist bumps, reveling in our accomplishment,” Foldes added.

(In case any of you have water-loving teens, the same crew from Sail Caribbean Divers has been running summer learn-to-dive and sail programs here in the British Virgin Islands for more than 30 years — www.sailcaribbean.com.)

Our dive on The Rhone was memorable not only because it was our first together as certified divers but because the site is a constant source of fascination for divers and snorkelers — part of the ship can be snorkeled. We were actually able to swim through part of the wreck — it took us less than two minutes. (There is still a spoon with the captain’s initials on it.) The massive size of the ship’s superstructure is amazing — as is the sea life that now calls it home — Queen Angel fish, fire coral, sponges that cover the wheel. Wow!

It was simply fate that The Rhone was here at all that fall day, Oct. 29, 1867 to be precise, explained our dive master Melisande Rowe. The state-of-the-art ship was actually supposed to go to the much busier port of St. Thomas, but because of an outbreak of Yellow Fever there, the passengers and cargo came to Tortola to take on coal and provisions.

When the hurricane blew in, Captain Robert Wooley was the first casualty — washed overboard as he tried to assess the weather. The crew tried frantically to get the 300-pound anchor up and get the ship out to sea, but the anchor and chains were stuck. It was all over in a matter of seconds. The ship exploded. To this day, no one knows exactly why; the red-hot boiler furnaces blew the ship in half.

Some 200 perished on The Rhone and 75 other vessels were either lost or seriously damaged in the hurricane. Amazingly, there were some survivors — one washing up on the island of St. John 17 miles away. Because the people on Salt Island (so named because they harvested salt) worked so hard to save the survivors and bury the dead, Queen Victoria gave them the island — a wonderful gift for the poor islanders.

We saw the gear box house and rudder, crow’s nest and mast, the hatch — all covered with coral and sponges. The Rhone is now a national park but, according to Rowe, that hasn’t stopped people from trying to steal the lucky porthole.

I’m glad they weren’t successful. I rubbed the porthole — number 26 — three times as instructed and we had great luck the rest of the trip. Everyone was happy (for the most part). Meltdowns were few. Memories were made.

I need a lucky porthole every time I take the kids.

(For more on Eileen’s adventure in the BVI, please read her travel diaries)