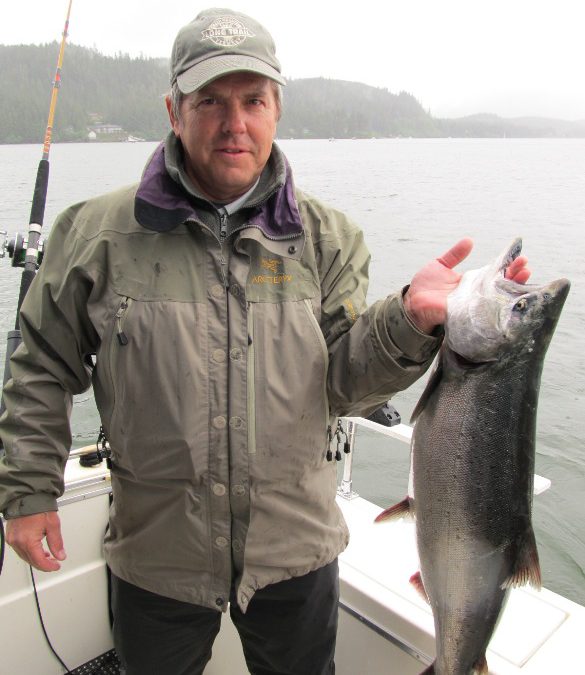 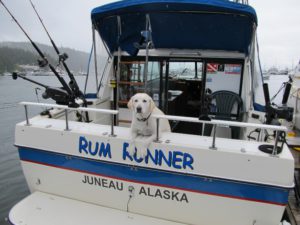 Moon the dog on the Rum Runner

We’re in Juneau Alaska out on Conder’s fishing boat Rum Runner trying to catch salmon before we head home. This is Conder’s 20th season taking vacationers out on half day or whole day charters. In winter, he teaches school.

He’ll also take guests out whale watching or to photograph whales and eagles. He demonstrates by flipping some herring into the water so that the resident Eagles swoop and   fly to get the fish.

But where are the salmon? Patience, Conder tells me. He jokingly hands me the coloring book about Inky the Whale he gives to impatient kids on board. His big dog Moon always helps too. 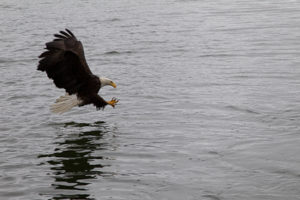 “There are fish out there,” he promises. And indeed they are. First my brother-in-law Jim Long catches a chum salmon—especially good smoked, Conder says. My husband Andy lands a Coho and none of the other captains (they are in constant touch via cell phone to see where the fish might be biting) can believe it is really a Coho this early in the season. Conder is so convinced he makes a $20 bet on the fish.

Kings are the largest of the five species and Alaska’s state fish and average 20-40 pounds though they can weigh more than double that. Cohoes or silver salmon are smaller and are the last of the salmon to spawn. Sockeyes are the top salmon used for smoking and are red while pinks are used in canned salmon while chums provide much of salmon caviar—and food for Alaskan dog teams.

All five species return from the ocean to Alaska’s streams each summer to complete their life cycle where they were born to spawn and then die.

They lose three—at least they are biting—and my husband catches a small king. (That’s what we thought we’d find in mid-June. We’re heading in—Conder has another charter this afternoon—when two of the lines suddenly snap back, an indication that something is on the line. My husband has a small king but my brother in law comes up with a 20-plus pound fish. 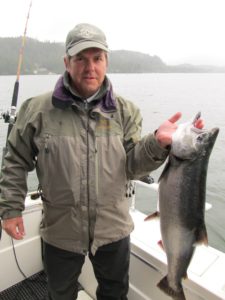 Catch of the day - King Salmon by Jim Long

We come back to the dock smiling. Which one tastes best? “It all depends on what you like,” Conder says smiling.

I’m not much of fisherman, I admit, though I have gotten up at 4 am to fish on the Kenai River (another trip).

I was glad all of our time in Juneau wasn’t aboard the fishing boat or a big cruise ship.  Most visitors here spend just a few hours.  Our InnerSea Discoveries small-ship cruise had ended here.

Juneau, the state capitol and only accessible by plane or boat, gets over 950,000 tourists annually, the vast number on big cruise ships.  They are missing a lot, spending just a few hours here.  We spend the night in the quirky and  wonderful SilverBow Inn where breakfast includes home-baked bagels and pastries and kids and parents delight  in the big jars of penny candies.

I have a massage at the Pearson’s Pond luxury suites and garden spa with its own manicured garden and pond and just a bike ride from Mendenhall Glacier which boasts the only visitor center in the United States within a mile of a terminal glacier that calves icebergs into a lake.

I wish we had time to go glacier trekking again with NorthStar Trekking—a memorable  experience during which we not only landed on a glacier in a helicopter but then strapped on crampons to explore.

There’s the first-rate Alaska State Museum with everything from Native Alaskan to mining to fishing to art exhibits. (Check out the life-sized Eagle’s nest.)

Mendenhall is one of Juneau’s top attractions stretching 12 miles and more than 100 feet tall. No wonder we so many helicopters doing sightseeing tours and visits to sled dog camps on the snow.  There’s also plenty of places to kayak as well as bike and fish—including the hatchery and the first rate Alaska State Museum with Native, mining, fishing, and Russian displays   A short flight south and you can visit Admiralty Island Brown Bear Sanctuary but locals joke at the expense (many hundreds of dollars) visitors go to see the bears when they see them simply crossing the road.

You can kayak, hike, canoe or raft around here. Look for birds—more than 280 species nest near Juneau including Bald Eagles that are more abundant in Alaska than anywhere else.  The Auke Bay Harbor, where we were fishing, is a good place to Eagle Watch.  Because the waters here are rich in krill (shrimp like organisms) the Humpbacks also come here to feed—traveling more than 3000 miles from tropical waters in  Hawaii for summer in just a month or so.

They are so plentiful that Captain Chris promises your money back if you don’t see them on one of this whale watching trips. “And that has only happened twice in 20 years he says.”

We’re not in the right spot. Nor do we see any bears loping down the streets.

Captain Chris has arranged for a local processor to freeze our fish and send it to us.

Meanwhile, the salmon jerky we bought will have to suffice.