Re-living slavery and the Underground Railroad at Conner Prairie 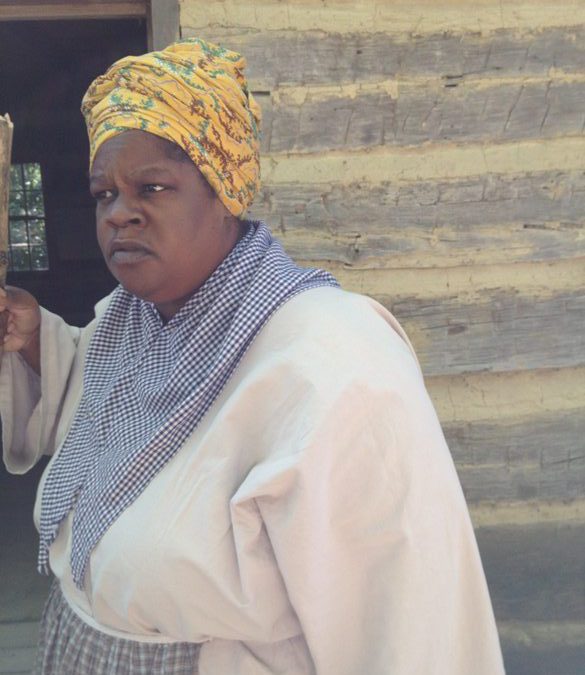 “Give me attitude and it will be beaten out of you!”

It’s 1836 and I’m a slave about to be sold in Indiana.  I’m treated like an animal—a brood mare to be exact.  The potential owners only care about “how many darkies I can drop,” or whether I can cook or sew.

“Don’t you lie to me!” one potential buyer warns.  “You stupid dumb darkie!  You are dumber than my hogs.”

I’m frightened and angry, separated from my family.  I don’t know if Ill ever see my husband or children again. But when my chance comes for freedom, I risk everything and take it—I run away.

I start a long tortuous trip on the Underground Railroad. Here at Conner Prairie, the living history museum outside Indianapolis, the journey that would have taken 3-5 years takes us just 90 minutes.

Follow the North Star is a special program here only offered at night in November and April and to school groups other times of the year.  I’m getting a special preview with other journalists in town for the Society of American Travel Writers Convention where I’m speaking.

Here at the only Living History museum in the Midwest, kids can explore Prairie Town of 1836  where  they take on the role of gardener or criminal or deputy and interact with the townspeople, running errands, sweeping floors, doing laundry, helping in the garden, cooking .

At the Civil War Experience, they both use 21st century technology to defend a small Indiana town from Confederate Raiders (which buildings would you protect?) and get the chance to join the Cavalry. “Not boring at all,” agrees Emilia Grunden, 11.

And that’s what it’s really about.

But nothing is more powerful than stepping into the shoes of an escaped slave. The story line: Our owner has brought us to Indiana not realizing he must pay a $500 bond on each of us—imposed by the state for free as well as enslaved African American s. Rather than pay that exorbitant amount, he resolves to sell us back south.

But when he’s not looking, the twelve of us run away.  There’s danger everywhere—slave catchers who would turn us in for bounty.

We first encounter some farm wives who couldn’t be less friendly, though they tell us they re god-fearing people who don’t believe in slavery.  In fact, their husbands are raising money so the slaves can return to Africa where they belong.  “You’ve got a right to freedom but not here!” they say, as their teenaged daughters show us the road toward Roberts Settlement, a free black community about 15 miles away, we’re told.

We shiver, though it is hot.  “We never met you,” they say as they show us where to go.

Down the road, we meet an escaped slave named Jack Hunter who made it to freedom in Detroit and was earning $1.25 a day.  “You won’t believe that but it’s the truth,” he says.  He and his brother Charlie are risking their lives and freedom returning to the South to find his wife Annie and his son Henry and either buy their freedom or help them escape.

“We never even got to live together,” he says.  “My master’s farm was 15 miles from Annie’s master’s farm.  I only got to see her on Sundays.  It hurts that my son is growing up not knowing who his daddy is!”

He points us toward a Quaker family down the road who helped him two years ago. “It’s a big yellow and green house,” he says.

I imagine it is dark and there are no lanterns. We’re hungry and tired.  And then disaster strikes. We meet a distraught out of work carpenter who blames us for his woes…even his wife’s death.  “How can I compete when you work for free?” he yells. “I’ve had it with your kind!  When my wife got sick, I couldn’t afford a doctor. It’s your fault, you took my job and my house!”

We hear shots outside as the slave owner is searching for us but the Quaker women keep them from entering the house.  “We are members of the society of friends,” they say. “We do not believe God would want anyone to be slaves. You can count on friends to help you….”

“Stand tall they tell us…be safe,” they send us to Mrs. Ward, a black woman who lives nearby. She points us toward Robert’s Settlement where we can blend in with the other African Americans and rest before continuing on our journey to Michigan and Canada.  “They’ll get you out of those slave clothes,” she promises.

Sadly, we learn, fewer than half those who set out on the Underground Railroad made it to freedom.  In our group, a couple would have been captured, three would have drowned after one fell in the river and the other two attempted a rescue.. One would have gotten injured and no one would have known what happened

Sobering and frightening and with messages for today—whether those sold into the sex trade or those sent from South America across the desert or those who attempted to flee during the holocaust.

Jackson Burns, 14, is among the interpreters we meet on our journey who says the program is really awesome because “the experience makes you really get it… it’s different than a text book.”