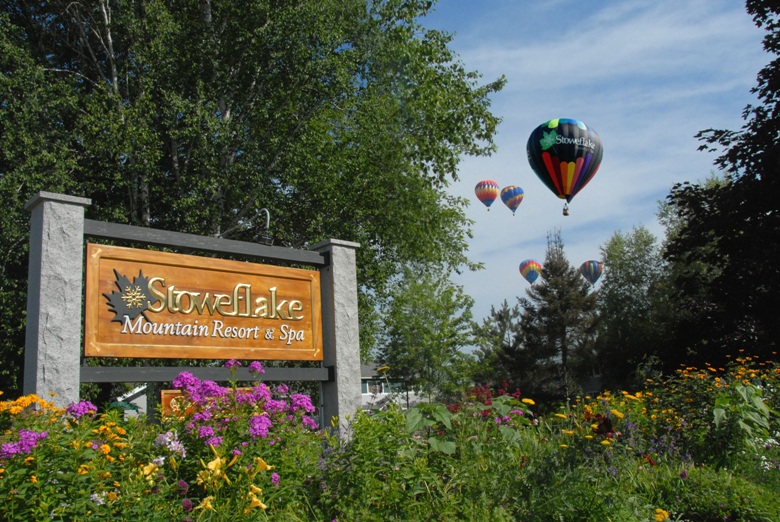 Balloonfest at Stoweflake Resort in Vermont

How much does a cow eat in a day?

The kids standing in the cow barn at the historic Vermont farm, one of the finest daily farms in the country and a terrific introduction to Vermont’s rural past, all giggle as the massive cows go to the bathroom in front of them just as Kolf explains these cows eat 100 pounds of food a day — equivalent to two 50-pound first graders — in order for each to make seven gallons of milk.

The kids have already petted a chicken (and learned they’ll eat cantaloupe, as well as worms) met the baby calves Fiona and Danika and the draft horses Joe and Jim. Certain days of the summer, kids, ages 10 to 15, can become a farm vet for a day; on Foodways Fridays, they can see how vegetables and herbs from the garden were used by farm families a century ago. On Time Travel Tuesdays, they can help with late 19th-century chores. (How about churning butter?) And every day they can try 19th-century games. (Rolling that wooden hoop is harder than it looks!)

Billings Farm and Museum is a great place for those teachable vacation moments we all want — memorable as well as fun. The Farm, first established in 1871 and including the restored 1890s farmhouse (famous when it was built for its indoor plumbing) and continued through the stewardship of his granddaughter Mary French Rockefeller and her husband conservationist Laurance Rockefeller is now run by the Woodstock Foundation, as is the nearby Woodstock Inn and Resort right on the Village Green, where a stay includes a visit to the Farm and Museum and the Marsh-Billings-Rockefeller National Historic Park, the only national park that tells the story of conservation history and boasts miles of hiking trails.

We loved the relaxed ambiance of the inn with its white Adirondack chairs in the garden, focus on local foods (an entire menu of the local cheeses Vermont is known for), spa (try a signature service for the season — Berry Bliss for summer or treat your teen to a treatment), golf and easy access to hiking trails, nearby attractions and the historic village with its shops like the 125-year-old FH Gillingham and Sons General Store with all kinds of local children’s books, made-in-Vermont toys and old-fashioned games.

Most of us think of Vermont as a fall destination — all of those glorious leaves! — or for winter snow sports. But summer in Vermont is a great bet to show kids things they might not see at home, like a cow going to the bathroom. You can also:

— Stay on a farm. You might even win a farm vacation.

— Watch glassblowers at work at Simon Pearce in nearby Quechee, Vt., (the glassblowing operation has just reopened after months of reconstruction and renovation, as a result of damage from last fall’s Hurricane Irene). Simon Pearce also has a terrific restaurant where the kids’ menu features Shepherd’s Pie and everyone loves the Vermont Cheddar Soup.

— See how cheese is made. Forty-five Vermont cheesemakers produce 150 varieties of award-winning artisan and farmstead cheese. The Vermont Cheese Trail can help you find a cheesemaker to visit.

— Learn all about raptors and rehabilitating orphaned and injured birds at the Vermont Institute of Natural Sciences, VINS, in Quechee. where more than 400 injured and orphaned birds from throughout Vermont and New Hampshire are treated each year.

— Discover how flavors are chosen and ice cream made at the Ben and Jerry’s Ice Cream Factory Tour. It’s the number one Vermont tourist attraction.

There’s plenty of summer action at Vermont ski resorts too whether you want to play golf, tennis or disc golf, mountain bike or hike. (Take the easy way up Mount Mansfield — Vermont’s tallest peak — in the famous Stowe gondola and then access hiking trails.) There’s even hot-air ballooning. More than 25 hot-air balloons will soar during the 26th Anniversary Stoweflake Hot Air Balloon Festival, July 6 to 8, 2012 at Stoweflake Mountain Resort and Spa. For the first-time ever, Stoweflake Mountain Resort and Spa is offering a special package for its annual hot-air balloon festival with up to 40 percent savings.

Smugglers’ Notch Resort has its own zip line canopy, as well as a llama trek, high ropes and a new specialty Survival Camp for kids 9 to 17 that teaches wilderness survival.

Bromley, which already has an alpine slide, water slide, bumper boats and bounce house, among other attractions, is set to open a new Aerial Adventure Park in early July that will combine elements of a zip line, canopy tour and challenge course. Kids as young as seven can work their way from platform to platform and tree to tree, over bridges of rope, wood and wire.

I love that Vermont offers so much 21st-century summer fun, as well as the chance at a place like Billings Farm to time travel back to a simpler time. Kids can even have a scavenger hunt in the museum that explains what life was like for 19th-century farm families. (Who can find the doll in the cradle? The buckets used to collect maple sap for Vermont’s famous maple syrup?)

After a morning hike, I think about those buckets when we sit down to a sumptuous breakfast at the Woodstock Inn where pancakes and stuffed French toast rule.

(For more summer vacation ideas, check out the “Taking the Kids 51 Great Ideas for your Family’s Summer Vacation”)