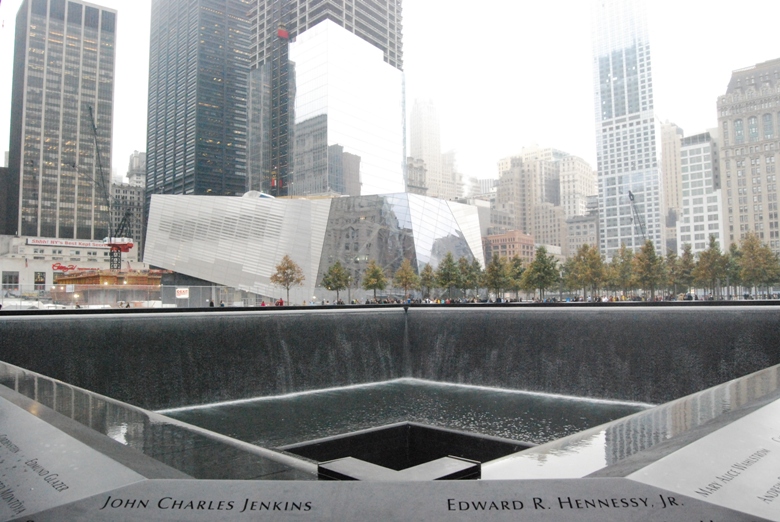 No, not NoLita or the Lower East Side, though they certainly have plenty of appeal for tourists and locals. Certainly not Times Square with its popular pedestrian-only areas, though you’ll meet crowds of tourists here, too.

Crowds have been flocking to the 9/11 Memorial since it opened Sept. 11, 2011. More than 4 million visitors are expected at the 9/11 Memorial before 2012 ends, coming from the city, the suburbs and all over the world.

(Tickets are free, but it is necessary to reserve timed admission online; there are a limited number of day passes, only two per person, available at the Official NYC Information Kiosk at City Hall, the 9/11 Preview Site at 20 Vesey St., or the New York Water Taxi booth at South Street Seaport.) On the Memorial website, you’ll find helpful suggestions on talking to your children about terrorism.

A visit can’t help but inspire conversation and reflection — even among teens. “The people who were killed during the attacks not only are remembered, but even 10 years later, people find the importance of visiting and continuing to recall them as heroes,” said Khaliq Sanda, one of a group of students who attend our suburban high school under the auspices of A Better Chance. My husband and I took seven of them to the Memorial on a cold winter day.

One of the other boys, who was raised in the Bronx and was just seven on the day of the attacks, vividly remembers that day and was reluctant to come because he said it would make him “sad.” But he was glad we insisted.

And once families venture downtown, they realize how much there is to see and do at the tip of Manhattan. There are more than two dozen museums, including The Smithsonian’s National Museum of the American Indian, the Museum of Jewish Heritage and even The Skyscraper Museum. There’s also the site of George Washington’s inauguration, Wall Street, the New York Stock Exchange and the National African Burial Ground National Memorial. (Visit www.downtownny.com for more information about Lower Manhattan and www.nycgo.com for the latest events and hotel deals.)

(The Downtown Culture Pass offers significant discounted access to eight cultural institutions and a walking tour of Wall Street, and if you purchase a New York Pass, which offers discounted admission to 70 city attractions, including in Lower Manhattan you can hop a free water taxi from Midtown.)

Everyone knows about Wall Street and the Financial District — more than 300,000 people work in Lower Manhattan — but not only in financial services these days as other kinds of companies move in. At the same time, Lower Manhattan has become a real neighborhood, home to nearly 56,000 New Yorkers, including many families, making the area one of New York’s fastest growing neighborhoods with restaurants and upscale shopping, including the just opened J and R Jr. store, which caters to kids up to age nine with everything from GPS-equipped strollers to kid-sized musical instruments and iPads.

No wonder tourists are opting to stay in the neighborhood. Lower Manhattan now has 18 hotels to choose from with seven more in the works. (The all-suite Conrad New York is the latest and it is expected to open this month in Battery Park City. (Check www.conradnewyork.com for opening deals.)

Take the ferry from Lower Manhattan to Ellis Island and the Statue of Liberty. Hop on the Staten Island Ferry for one of the best views of the N.Y. skyline. Visit South Street Seaport. You’re not far from Chinatown, Little Italy and the Lower East Side with its standout Tenement Museum.

Let’s not forget the chance to simply walk in the park or ride a bike. There are almost 57 acres of green space here — equivalent to 43 football fields, including Battery Park with its spectacular water views.

The day we visited was too cold and nasty for a walk in the park, so we took our time at the 9/11 Memorial. We stood in the pelting rain and sleet and ran our fingers over the names on the bronze panels — nearly 3,000 people died in the twin towers, at the Pentagon and in a field near Shanksville, Pa. The Memorial also commemorates the six people who died in the 1993 World Trade Center bombing.

The high school boys we’d brought, all children of immigrants, were struck by the diverse names and nationalities. The attacks killed people from 93 nations. At their families’ request, their names were placed next to friends, relatives and colleagues — there is a group of firefighters and police officers.

Around us, 1 WTC — when it’s finished later this year it will be the tallest skyscraper in the country at 1,776 feet — is going up as is 4 WTC — a 979-foot skyscraper. A massive transportation hub is also being built.

The 9/11 Museum is scheduled to open later this year beneath the Memorial Park, located at the bedrock foundations of the World Trade Center. It will offer exhibits and artifacts that will tell the individual stories of survivors, responders and New Yorkers. Meanwhile, at the visitor center you can watch a short film and purchase books, including several for children.

It’s impossible not to be moved by the Memorial’s twin reflecting pools — each nearly an acre in size — the largest manmade waterfalls in the North America. The pools sit in the footprints of the twin towers. The plaza will eventually have more than 400 trees brought from all the areas within 500 miles that were directly impacted by the attacks. When completed, the plaza will be the perfect place for silent reflection.

“The Memorial gave me a welcoming feeling,” observed Luis Cruz, a high-school freshman from New Jersey who was part of our group. “The giant pools symbolize peace and serenity.”