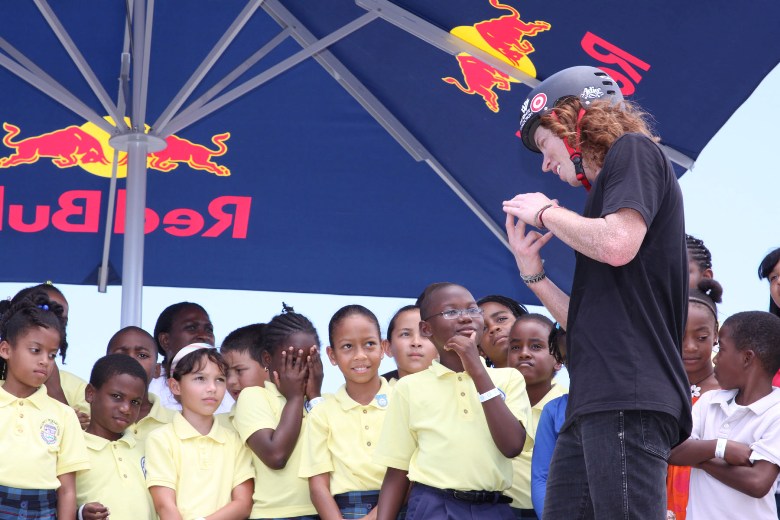 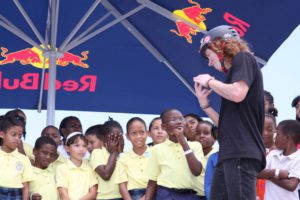 Amazing. It’s vacation and the teens are awake and ready to roll before 8 a.m.!

That’s what happens on those rare occasions when they love the itinerary you’ve planned. Avid skateboarders 12-year-old Max Weinberg, my cousin, and his 13-year-old buddy, Miles Singer, are not only heading to the world’s second-largest skateboard park — Black Pearl in the Cayman Islands (http://www.blackpearl.ky) — but they’re going to get tips from the pros, including professional skateboarder and champion snowboarder Shaun White, instantly recognizable his long mane of curly red hair.

The 22-year-old White has come down to Grand Cayman, his parents and sister in tow, to inaugurate Skate Cayman (www.skatecayman.com) an 11-week summer program through which top pro skateboarders, including Bucky Lasek, Greg Lutzka, Brian Sumner and Chris Cole, will offer kids tips and demonstrations. “I hope I’m a positive influence,” said White, surrounded by awestruck kids in their bright school uniform shirts.

“He does such good tricks and he doesn’t get scared or anything,” says John McDonald, 10, who admits he gets “kinda scared,” when he tries a new trick.

“I had older pros who were really nice to me,” explains White, adding he’s glad for the opportunity to do the same in return. “This is a reward for me.”

Besides, he adds, what could be better than testing his latest tricks at this huge skate park, while sharing an island vacation with his family — snorkeling with the Southern Atlantic stingrays in the crystal-clear water at the island’s famous Stingray City, hanging out on Seven Mile Beach’s white sand, holding the baby Green Sea Turtles at the Cayman Turtle Farm (www.caymanislands.ky). “This place is great for parents and for kids,” adds Shaun White’s mom Cathy. “The kids aren’t going to be complaining they’re bored!”

Teresa Morse, from Grayson, Ky., said her family chose the Cayman Islands to vacation specifically so 11-year-old Fenner could come to this skate park. “We’ve been here almost every day,” she said, snapping photos with an obliging Shaun White.

Single Dad John Seamons, vacationing with his two boys from Colorado, was just as enthusiastic — both for the opportunity for his 10-year-old and 14-year-old and the chance for some “grown-up” time, confident that they were happily occupied at the skate camp. “When I heard about it, I signed up right away,” he said.

Skate Cayman is part of a broader Summer Splash promotion aimed at families. Kids under 12 fly free on Cayman Airways (nonstop from New York, Miami and Tampa) eat free at island restaurants and get free admission to local attractions like the Skate Park in the afternoons and the Turtle Farm. Teens can also dive free while parents get a free night when they book for four.

Douglas Cameron, the Canadian who oversees the camp and manages the park and the surf ride attraction next door, stresses that the skate park is as much for local kids as it is for visitors. The park offers 64,000 square feet of ledges, boxes, v-hips, banks and stairs and half pipes, which gives skateboarders a spectacular opportunity to test their mettle. “I can be challenged and so can beginners,” says White.

Just as important, this is a safe place where parents can leave older kids on their own, says local Constable Steve Myers, whose son Sean, 8, an avid skateboarder, is a park regular and has joined the camp. “This is a great environment,” he says, adding that kids learn comradeship and teamwork here.”

Another plus: the facility provides an informal and safe setting for visiting kids to meet and get to know locals. His son, he adds, has made friends from New York, California and Texas, among other places. “They get to understand and respect each other,” he says.

That’s obvious. The weekend we spend here, Miles and Max opt for the park and their new friends rather than the chance to hit the beach or even sleep in. And, though our hotel — the Westin Casuarina Resort (www.westin.com) — is right on Seven Mile Beach and boasts a terrific pool complex, the boys are too busy skating to check them out even once (summer rates are $159 plus tax a night — two thirds off winter rates!)

Kids skate under the lights on Friday nights and when they get hot they take a break at the Surf Park, which simulates real surfing with barrel waves. Adults gather for drinks at the outdoor restaurant as music plays and little kids tumble down the bouncy slides set up nearby. “The kids can skate and you can relax,” says Terry Sturtevant, a local nurse and mom of a young skater.

Cameron adds that his staff will customize a package for visiting families. “Just get in touch,” he says.

The kids at the Skate Camp, meanwhile, have eyes only for Shaun White and pepper the star athlete with questions.

How old was he when he started? (Six)

Was he ever injured?

He crashed mid-air with another skateboarder, broke several bones and had to go to school on Picture Day when he was 11 with two casts and two black eyes. The kids thought that was hilarious.

Does he get nervous? “Not really,” he says, but his mom Cathy, standing by listening, whispers that she can’t stand to watch him for fear that he’ll get hurt.

The kids watch as Shaun White struts his stuff in the park-flying high in the air, holding onto his skateboard. He makes it seem effortless.

“You don’t see that every day,” says 10-year-old Aliyha Nelson. That’s an understatement.

When White finally leaves, Max, Miles and the rest of the kids don’t miss a beat.

There’s another trick to practice.