Meeting Up with Some Ghosts and Goblins 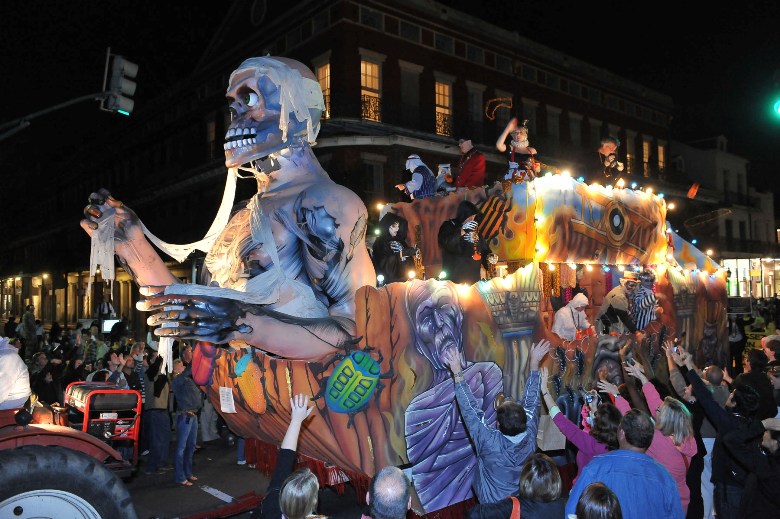 Halloween is no longer just about trick or treating in the neighborhood. That’s old school — apparently. Instead, you can take your pick of zoos, museums, theme parks, campgrounds, big cities, small ones — all of which have Halloween doings guaranteed to scare the teens and plenty of benign “spooky” fun for the littlest ghosts and goblins.

Even Broadway is getting into the act with its first Kids’ Night on Broadway Halloween (www.kidsnightonbroadway.com), which means kids between 6 and 18 can see Broadway shows for free, including hits like “Wicked,” “Billy Elliot” and, perfect for Halloween, “The Addams Family,” “Mary Poppins” and” Memphis.” (Use promo code KNOB2010. A paying adult must accompany each kid.) Even better, KNOB tickets include a pre-theatre Halloween party at Madame Tussauds, restaurant and parking discounts and more. You can feel extra good about participating because the event salutes the 60th anniversary of Trick-or-Treat for UNICEF (www.unicefusa.org), which to date has raised nearly $160 million. (For more on New York’s Halloween offerings visit www.nycgo.com.)

Twenty theme parks across the country have big Halloween haunts, including Knott’s Berry Farm (http://haunt.knotts.com/), which is celebrating its 38th Halloween Haunt, Busch Gardens Williamsburg (www.howloscream.com/) and its “Howl-O Scream (want to have your makeup done just like the performers?), the less frightful Legoland in Carlsbad, Calif., (www.legoland.com) where “Brick-or-Treat includes “Mail Order Monsters” where your little monsters can help Princess Playwright break the spell and the brand-new maze at Paradise Park (www.paradise-park.com/) in Lee’s Summit, Mo. (Try not to get lost in this 9,500-square-foot labyrinth!)

Go to Disneyland’s Halloween Time (www.disneyland.com/halloween) where Space Mountain turns into Ghost Galaxy — yes, a haunted version of what may well have been your kids’ first “scary” ride, and the chance to meet and greet all of your favorite villains and vote for them too. (For 10 nights this month, you can come to Mickey’s Halloween Party ($49, if tickets are purchased in advance; $59 on Halloween) in costume and trick-or-treat your way through the park, as you enjoy special shows, fireworks and more. (To save $300 on four-day packages, visit http://disneyland.disney.go.com/special-offers/.)

You’re crazy busy, of course, shuffling work, the kids’ science projects, soccer practice, clarinet lessons … all the more reason to take an afternoon, or a weekend, if you can manage it and have some fun in the pumpkin patch. Visit www.pickyourown.org and find one near you.

Go camping. Some of the busiest camping weekends are in the fall at Yogi Bear’s Jellystone Park Camp-Resorts (http://www.campjellystone.com/locations.html), which offer “no scare” weekends with corn mazes and more.

If you are in Northern California — or hanker for a getaway there — visit Half Moon Bay (http://www.half-moon-bay.ca.us/). Located about 40 miles south of San Francisco, Half Moon Bay calls itself the pumpkin capital of the world with festivals, farms, pumpkin ale and even pumpkin spa experiences. (While you’re in the neighborhood, the California Academy of Sciences (www.calacademy.org/halloween) — considered one of the “greenest” museums in the world — is celebrating the “SuperNatural” all October with special programs and events that allow you to commune with bats and get up close and personal, just not too personal, with tarantulas, snakes and otherworldly fish.

In Orlando, SeaWorld’s “Ocean of Halloween Fun” means kids can watch “spooky” shows and help “Sesame Street’s” Abby Cadabby find her magic wand and search for hidden “sea” treasures throughout the park. There’s even a Spooky Spectacular Sleepover (www.Seaworldspooktacular.com) Oct. 15-16 and Oct. 22-23. There are hotel discounts as much as 25 percent off at Walt Disney World too, where your littlest park goers will like Mickey’s Not So Scary Halloween Party (www.waltdisneyworld.com). Nearby, Universal Orlando is celebrating its 20th Halloween Horror Nights (www.halloweenhorrornights.com) with what they promise will be the scariest yet with eight new haunted houses, scare zones and live shows.

Make it a new tradition to head to a city near you for some spooky fun. Chicago’s Navy Pier (www.navypier.com) brings you the zombie march, a haunted house and carnival of curiosities, as well as fireworks every Saturday in October.

Providence, R.I., boasts the Jack-O-Lantern Spectacular at the Roger Williams Park Zoo (www.rogerwilliamsparkzoo.org/) where there will be thousands of illuminated jack-o-lanterns that have been created by professional pumpkin carvers.

If you are looking for real ghosts, Ohio promises that Waynesville is a bona-fide haunted village with hands-on ghost hunting and information on real ghostly encounters (http://www.ohioslargestplayground.com/places-to-play/getaway-itineraries/fall-adventures/ghost-tours/).

If you’re planning a holiday in Britain, then head to Wales and stay in a haunted castle. (Wales apparently has the highest castle-to-person ration in the world — 641 castles, 3 million people — and a long history of hangings and riots and, as a result, plenty of ghosts (www.visitwales.com).

Ghostly encounters aren’t that unusual closer to home either. According to a Rent.com survey, 11 percent of renters believe they have lived in a home inhabited by ghosts. The website lists the top 10 haunted cities in the country, including Savannah, Ga. And Gettysburg, Pa., http://www.gettysburg.travel/ where all 40 miles of the battlefields where some 51,000 Civil War soldiers died are believed to have paranormal activity.

And let’s not forget Salem, Mass., the site of the infamous Salem Witch Trials of 1692. The restless spirits of the 19 hanged as witches are said to haunt Gallows Hill. New Orleans’ St. Louis Cemetery, meanwhile, is considered one of the country’s most haunted resting places and you can also tour the historic Voodoo Museum (www.neworleanscvb.com). New Orleans touts plenty of good October deals, too.

Wherever you decide to go this Halloween, just don’t forget your witch’s hat.